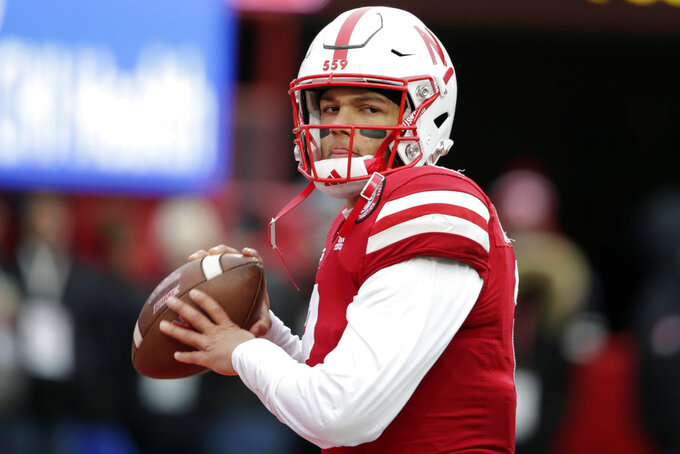 The Nebraska freshman had never kicked in the snow before, and the intensity was picking up as he was getting set to try a season-long 47-yard field goal with a swirling north wind at his back and a feel-like temperature of 15 degrees.

The ball off his foot started left and faded right — right between the goal posts for his third field goal of the fourth quarter and the go-ahead score in a 9-6 win over Michigan State on Saturday.

"We went out there like we do for any other kick," the native of Birmingham, Alabama said. "We cleared off the ground to make sure we get a good ball off. Played a little bit of wind and hoped it would go in. It was a little cold out there. I'm not going to lie. It was a pretty strong wind out there. Not the easiest thing. The ground's frozen."

It was the first time the Cornhuskers had won a game without scoring a touchdown since a 3-0 victory over Kansas State in 1937, according to Nebraska sports information officials.

"Every week I've been coaching them there's a little more fight. Today's the most I've seen," said first-year Huskers coach Scott Frost, whose team has won four of five after an 0-6 start. "That's a hard game to win. Even harder to lose. Our guys had to keep grinding, and the defense had to keep coming up with stops."

The Spartans (6-5, 4-4 Big Ten) got field goals of 34 and 26 yards from Matt Coghlin but were unable to sustain offense against a Nebraska defense that has struggled most of the season.

The Spartans lost their chance for a touchdown early in the fourth quarter when Matt Dotson dropped a pass in the back of the end zone, and they ended up settling for Coghlin's second field goal.

Nebraska safety Antonio Reed came up big on two straight series to help set up the tying and winning field goals. He separated Rocky Lombardi from the ball with a jarring sack, and defensive lineman Damion Daniels recovered at the Michigan State 20. Next, Reed and Dedrick Young knocked the ball out of Dotson's hands for an incomplete pass to force a punt. Nebraska ran six plays before Pickering connected for the third time.

"We had too many drops," Spartans coach Mark Dantonio said. "If you've got to point to one thing in the football game, it would be the dropped passes. I thought Lombardi played pretty well. At the end of the day, you've got to put the ball in the end zone in the red zone."

Michigan State: The injury-plagued Spartans are a mess offensively. They gained 289 total yards, but between dropped passes and big stops by the Nebraska defense, they couldn't sustain any drives.

Nebraska: The Huskers' defense has given up a lot of yards and points this year, but they played their best game of the season.

"That's what we've been searching for as a defense all year, a complete game," linebacker Luke Gifford said. "We got the stops when we needed them, got a couple takeaways. It was huge."

Nebraska, which had gone over 450 total yards in seven straight games, generated just 248. Devine Ozigbo ran 18 times for 74 yards to become the first Nebraska player since 2014 to go over 1,000 for the season. ... Stanley Morgan caught four passes to become the school's career leader in receptions with 182. ... Lombardi, starting in place of the injured Brian Lewerke for the second time in four games, completed just 15 of 41 passes. ... MSU's Connor Heyward rushed 21 times for 80 yards and caught five passes for 78.

Frost and Dantonio met at midfield with the parents of former punters Sam Foltz of Nebraska and Mike Sadler of Michigan State. The two died in a car accident in Wisconsin in July 2016. The coaches made a presentation to the families.

"I'd like to mention the Sadlers and the Foltzes. Today was about them," Pickering said. "This is a game for them. And definitely I would like to thank my performance to Mike and Sam out there. It means a lot I go out there and represent them well."