As Atlanta metro area booms, so does football in Georgia 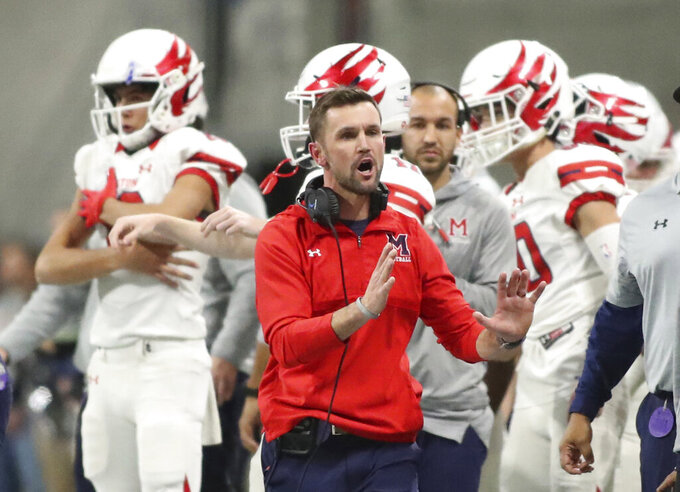 In this Dec. 12, 2018 photo, Milton coach Adam Clack reacts on the sideline during the first half against Colquitt County during the Class 7A high school football championship at Mercedes-Benz Stadium in Atlanta. Georgia has become the clear No. 4 state behind Texas, Florida and California for producing major college football players. (Jason Getz/Atlanta Journal-Constitution via AP)

MILTON, Ga. (AP) — The lawn in front of Milton High School looks big enough for a football field and provides a grand welcome mat to a building that would fit right in on the campus of a prestigious college, with its colonnade leading to an entrance of glass doors and tall windows.

The 14-year-old building is quiet and mostly dark on this Friday night in northern Fulton County, some 30 miles from downtown Atlanta. The action is at nearby Eagle Stadium, where thousands pack the bleachers to watch their defending state champions face perennial power Buford High.

Milton is an old school, it turns 100 next year, but a new football power. Last year's title was the Eagles' first, another source of pride for a small city — incorporated in 2006 — that is one of the wealthiest in the state. Milton coach Adam Clack has lived through the growth of north-central Georgia over the last two decades. It is startling.

"This was horse farms," Clack said.

The population of the Atlanta metropolitan area has boomed, adding 663,000 residents since 2010 to make it the fourth-fastest growing in the United States. The surge has created vibrant, even affluent suburbs and exurbs, such as Milton.

It also has boosted the quality and depth of high school football in a state where both were already among the best in the country. Many public schools are running well-resourced programs that lure top coaches from neighboring states with big salaries and prepare players for the next level with operations that mimic elite colleges.

Georgia has become the clear No. 4 state behind Texas, Florida and California when it comes to producing football players for major college programs. Recruiters from all over the country flock to Atlanta to find talent, but many of these players are staying close to home and stocking the rosters of the nearby Southeastern Conference and Atlantic Coast Conference schools.

"I ask candidly to a lot of college coaches: You got one place you can go and you can only spend one day, where are you going?" Clack said. "They're like: 'No doubt, we're going to the metro Atlanta area. It's not because you necessarily have the most talent. It's because you have the most ready talent that's going to be eligible.'"

Last year, 8.2% of FBS players listed Georgia as their home state, creeping closer to California (10.5 at No. 3 and pulling away from fifth-place Ohio (5.1%).

"So the level of coaching that exists in Georgia high schools, the level of development, they're comprehensive, 365 days-a-year programs within the high schools and also the trainers that exist here," said Georgia native and first-year Georgia Tech coach Geoff Collins. "That elevates everything in a good way."

North Gwinnett coach Bill Stewart made the move to Georgia from Florida in the 2003. The former University of Central Florida player and Sunshine State native had been defensive coordinator at Armwood High School, northeast of Tampa. On top of teaching and coaching track in the offseason, Stewart was also waiting tables part-time to help make mortgage payments.

He said he had head coaching opportunities in Florida but instead took a job as defensive coordinator at Parkview High School in Gwinnett County, which neighbors Fulton County to the northeast. Parkview was working on a 45-game winning streak.

Not only did his teacher salary and coaching stipend go up significantly at Parkview, but the local booster club was also helping to supplement coaches' salaries, along with raising funds for facilities, stadium upgrades and equipment.

At North Gwinnett, Stewart has a Touchdown Club committed to funding what he needs.

"So, let's say I need five more (coaching) supplements or I need two more supplements or whatever it is — if I need more supplements, then our community is going pay for more supplements because they know how important it is to have a first-class organization and have bodies that can coach," said Stewart, who has the Bulldogs ranked in the top 10 in the state in his third season as head coach.

According to a March report by WTLV-WJXX, at least 44 football coaches in Georgia made six-figure salaries in the 2017-18 school year. The number more than doubled since 2014-15. Many of those coaches previously coached in surrounding states such as Florida, Alabama and South Carolina.

At many schools, coaches simply coach. Not much teaching, not many administrative tasks.

"I am a full-time football coach," Clack said. "I mean I do a couple other things to justify my position in school, but they make no bones about it. And that's huge. I mean I couldn't imagine going back the other way."

The money and support is good all over the state, not just the Atlanta metro area, coaches say. The sport is thriving in smaller towns. That has not been the case in northern states such as Ohio and Pennsylvania, where the population drain in many small towns has had a drag on football participation.

Even schools without top funding can tap the most important resource: talented players.

At Stephenson High School in DeKalb County, Ron Gartrell has been head coach since 1996 and his teams have rarely missed the playoffs.

New high schools nearby have cut into Stephenson's population. Several schools share a stadium in DeKalb County. But the sheer number of quality players in the area means there is still talent at Stephenson, where you will find a four-star senior defensive back with offers from Alabama, Auburn and Georgia Tech and a three-star senior receiver committed to Texas A&M.

"You're looking at these people and all these schools are popping up and the competition is getting so much tougher to play these people," Gartrell said. "And you know we're in this little boat trying to row our shore to play against these big old boats. You know, it's been a challenge."

About a 10-minute drive from Hartfield-Jackson Atlanta Airport is Hapeville Charter Career Center. Coach Winston Gordon, a Florida native who played at Savannah State, was working in city government in the Atlanta area when he was lured back into coaching to start the football program at Hapeville in 2011.The school has about 600 students, shares a stadium and practices on a "dirt lot," Gordon said.

"I think the brand of football is at its all-time best," Gordon said, "And not just here at Hapeville Charter but throughout the state of Georgia."