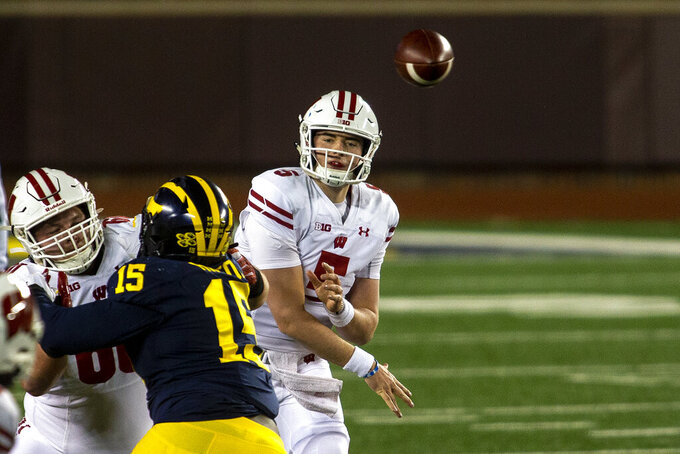 The matchup between unbeaten teams could help determine who wins the Big Ten West and plays in the conference championship game. The Badgers are toeing a thin line as they try to win the division for the fifth time in seven years. They had back-to-back games against Nebraska and Purdue canceled because of a COVID-19 outbreak within their program, before shredding Michigan last week. With the Big Ten setting a six-game minimum to be eligible to play in Indianapolis on Dec. 19, the Badgers can't afford another cancellation. Northwestern can show just how far it has come after finishing last in the division in 2019.

Both teams rely heavily on the run and both have been stingy defending it. Wisconsin is averaging a Big Ten-best 261.5 yards through its first two games while allowing a league-low 89 per game. Northwestern leads the conference with 191 attempts, though it's averaging just 3.6 per carry. The Wildcats are second against the run, allowing 91.8 yards per game.

Wisconsin: QB Graham Mertz. The freshman has seven touchdown passes without an interception and ranks fifth in the nation in passing efficiency. Mertz was 12 of 22 for 127 yards with two touchdowns against the Wolverines, after completing 20 of 21 and matching a school record with five TD throws against the Illini.

Northwestern: QB Peyton Ramsey. The graduate transfer from Indiana continues to stabilize an offense that ranked among the nation's worst. Ramsey matched a career best with three touchdown passes against Purdue last week while tying a season high by throwing for 212 yards.

Wisconsin and Northwestern were scheduled to play at Wrigley Field, only to have that plan get wiped out because of the pandemic. ... This is the first meeting with both teams in the top 20 since 1962, when No. 8 Wisconsin beat No. 1 Northwestern 37-6. ... The Badgers (2016, ’17, ’19) and Wildcats (2018) have combined to win the past four West division titles. ... Though Wisconsin has won three of the past four meetings overall, Northwestern has won five of six at Ryan Field starting with a victory in 2003. ... The Badgers lead the nation in total defense (218.5) and scoring defense (9.0), while the Wildcats rank second in the conference in yards ( 301.8) and scoring (14.0).