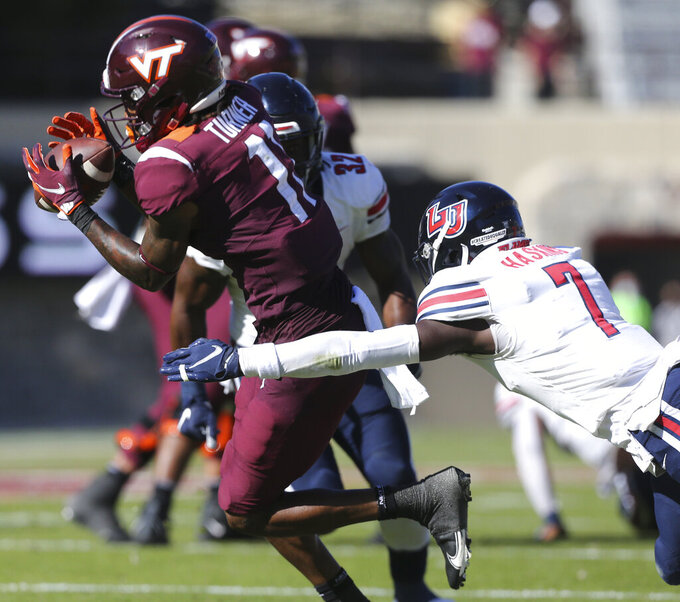 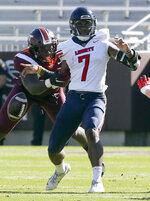 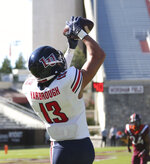 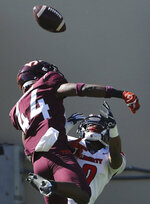 BLACKSBURG, Va. (AP) — For those doubting Liberty's initial foray into the Associated Press national rankings, the Flames took a rather large step Saturday toward validating themselves.

“To come out with a win, and on that note, it’s insane,” Barbir said. “I’ve been crying so much. It’s unbelievable for me. I had a similar one in high school ... but it couldn’t compare to beating an ACC opponent like Virginia Tech to go 7-0.”

“You don’t get a lot of wins like this in team sports,” Liberty coach Hugh Freeze said.

Barbir, who transferred from Penn State in 2017 and had been a student at Liberty before coming out for the team this season, had a 59-yard attempt blocked with 8 seconds left, and Virginia Tech’s Jermaine Waller returned it to the end zone for what appeared to be the game-winning score for the Hokies (4-3).

But officials ruled that Virginia Tech had called a timeout before the kick.

“I’ve always done this,” Virginia Tech coach Justin Fuente said. “I don’t like ever letting the kicker get a free swing at it. I guess I waited too long. It’s on me.”

Liberty then elected to go for it on fourth-and-6 from the Virginia Tech 41 and Malik Willis found CJ Yarbrough for an 8-yard gain with five seconds left to set up Barbir's winning kick.

Willis led the Flames, who won their eighth straight game going back to last season. He threw for 217 yards and three touchdowns and rushed for 108 yards and a score.

Hendon Hooker paced Virginia Tech, throwing for 217 yards and three touchdowns and rushing for 156 yards and a touchdown.

Liberty: The Flames masterfully controlled the clock in this game, holding the ball for more than 37 minutes to win time of possession for the sixth time in seven games.

“We knew we were going to have trouble stopping them and we tried to slow the game down,” Freeze said.

Virginia Tech: This loss could linger for a while for the Hokies, who continue to struggle on defense, having allowed at least 198 yards rushing in four of their past five games.

After making its first-ever appearance in the Associated Press national poll, Liberty probably will move up a few spots.

Willis moved to 6-0 as a starting quarterback, and for the fourth time in six starts finished with more than 300 yards of offense. He accounted for 325 yards and four touchdowns.

“We can’t worry about any logos being older than our logo because that’s what it comes down to in our minds,” Willis said. “I feel like we get overlooked sometimes because it is our first couple years in FBS football, first two years. You don’t really know what you’re going to get out of us.”

Virginia Tech played the game without leading receiver James Mitchell, who was with an undisclosed injury, and played nearly all of it without tailback Khalil Herbert, who re-aggravated a hamstring injury on the opening kickoff. Herbert ranked fourth nationally at 133.8 yards rushing per game.

Also, linebacker Rayshard Ashby went down with an injury in the second quarter and did not return. Without their senior leader, Virginia Tech’s defense allowed 249 yards in the second half.

Virginia Tech: The Hokies play Miami at home on Saturday.