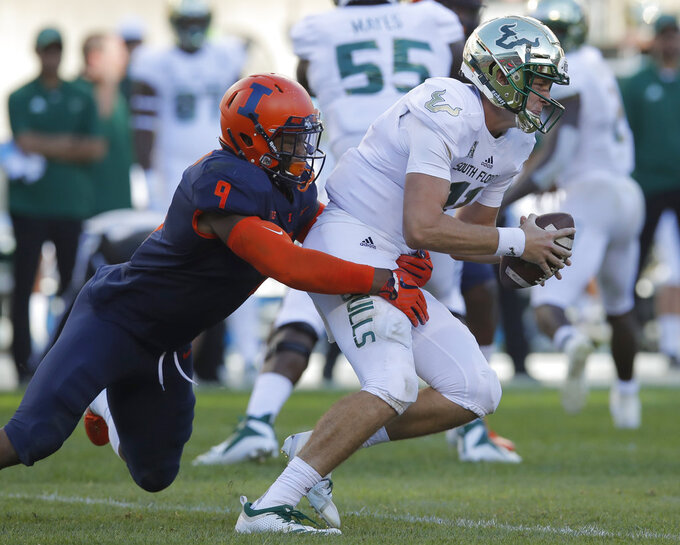 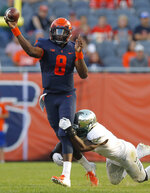 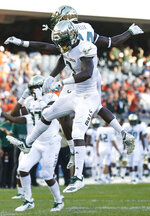 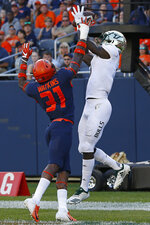 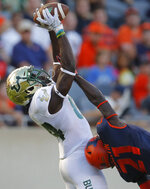 Barnett was 23 of 40 for 411 yards passing with two touchdowns and two interceptions, and Jordan Cronkrite ran for 136 yards and a score for the Bulls (3-0).

Trailing 19-7 early in the fourth quarter, Barnett cut the Illinois lead with a 14-yard pass to Salomon to make it 19-14. Two possessions later, Barnett found a leaping Randall St. Felix for a 55-yard catch, which set up a 22-yard field goal from Coby Weiss with 7:47 left. After another South Florida stop, Barnett connected with Salomon from 50 yards to score with 2:24 left to give the Bulls a 25-19 lead.

The Illini couldn't score on its final drive thanks to a sack by Tyrone Barber at the South Florida 25 with six seconds left. Freshman quarterback M.J. Rivers II threw the ball out of the end zone as time expired.

Chase McLaughlin converted a field goal from 52 yards to give Illinois a 16-7 halftime lead.

After a shaky first possession, Mike Epstein scored on a 43-yard touchdown run on Illinois' third play from scrimmage. Epstein rushed for 113 yards on 19 carries.

South Florida, which scored 49 points in a win against Georgia Tech last, week, answered with a 75-yard drive. Cronkrite went in from the 3 to tie it at 7, but the Illini defense held for the rest of the half and forced interceptions by Jartavius Martin and Del'Shawn Phillips, which set up field goals by McLaughlin.

McLaughlin connected again from 41 yards, banging off the right upright, capping a 10-play, 53-yard drive late in the third quarter to extend the lead to 19-7.

Rivers, in his first career start as quarterback, was 20 of 29 for 168 yards passing for Illinois (2-1). Rivers relieved A.J. Bush Jr., who was injured in the win against Western Illinois.

Illinois played a home game at Soldier Field for the fourth time in school history. The game attracted a small crowd with empty seats in the west side upper level.

Illinois coach Lovie Smith was back in a familiar place. Smith returned to the sideline where he guided the Chicago Bears to a 2006 NFC Championship. Smith was also backed by his former player and newly inducted Hall of Famer Brian Urlacher, who was attendance. It was like old times for Smith, who saw his team thoroughly dominate South Florida on defense and special teams in the first half, a staple of his mid-2000 Bears teams.

South Florida: One week after South Florida was sparked by two kickoff returns for touchdowns by Terence Horne, the South Florida special teams were disappointing. Coby Weiss, who was filling in for Jake Vivonetto because of an illness, missed two field-goal attempts. Jake Stone and Trent Schneider also struggled with the punting duties. South Florida won its fifth straight game against a Power Five opponent.

Illinois: Despite the loss, Illinois looked considerably better than the 47-23 loss last year in Tampa to South Florida. Illinois showed a strong running game and was solid on special teams.