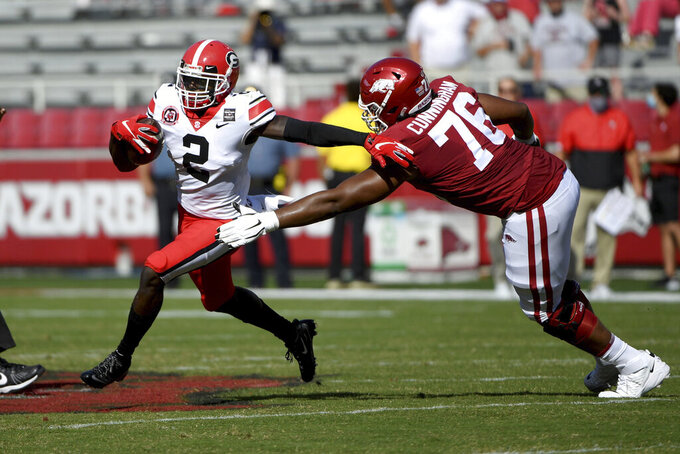 Georgia defensive back Richard LeCounte (2) runs past Arkansas lineman Myron Cunningham (76) as he returns an interception during the first half of an NCAA college football game in Fayetteville, Ark., Saturday, Sept. 26, 2020. (AP Photo/Michael Woods)

FAYETTEVILLE, Ark. (AP) — Stetson Bennett transferred away from Georgia after a freshman year spent far down the depth chart. Back then, in early 2018, he didn’t think he’d ever get a chance to lead his home-state Bulldogs to a win.

Bennett wasn’t expected to play in the Bulldogs’ season and Southeastern Conference opener. The whole week was spent wondering whether Southern California transfer JT Daniels or redshirt freshman D’Wan Mathis would get the call against Arkansas. But when Daniels wasn’t cleared because of injury and Mathis’ slow start led to the Bulldogs trailing against an opponent that hadn’t won an SEC game since October 2017, it was Bennett who had come full circle, back from junior-college football, and rallied Georgia to a 37-10 victory.

Bennett entered in the second quarter and led Georgia to a late first-half field goal and then marched the Bulldogs on three straight second-half possessions that ended in touchdowns, breaking open the game and leading to an unlikely hero in a game that looked devastating for a half with the No. 4 team in the country trailing 7-5 at halftime.

“When I left, no I didn’t ever think I’d ever be back. But when I came back, yeah, I thought I’d be here,” Bennett said.

It was a confident answer coming from a guy who originally left the school after his first year when other quarterbacks transferred in, usurping his spot on the depth chart. And even though he served as No. 2 to Jake Fromm last year, he was expected to be No. 3 in 2020.

Now Georgia coach Kirby Smart has to make another decision after Bennett went 20 for 29 for 211 yards and two touchdowns.

Mathis threw a red-zone interception and was sacked for a 17-yard loss pushing Georgia out of field goal range on third down during his 6-for-14 day, ceding quarterback duties to Bennett, trailing 7-2 after a safety was all the Bulldogs had to show on the scoreboard. Even his first four drives yielded only a field goal among a turnover-on-downs and a lost fumble.

“Really sloppy first-half. Felt like I was in an extra-innings baseball game,” he said. “I thought we were very stagnant and (took) undisciplined penalties. Every time we had something going, we’d shoot ourselves in the foot. You can’t win football games doing those things. We’ve got to improve and get better.”

Bennett’s next three drives resulted in two touchdown passes and an 81-yard drive capped by a 6-yard touchdown run. In the span of 10 game minutes, Georgia had gone from down 10-5 to ahead 34-10, largely because of Bennett’s settling effect.

Feleipe Franks’ finished 19 of 36 for 200 yards in his first game with Arkansas after transferring from Florida in the offseason. No single Arkansas quarterback threw for that many yards against an SEC opponent last year. Preseason All-SEC second-team running back Rakeem Boyd never exerted himself on the game as he ran for just 21 yards on 11 carries.

Franks was better than recent Arkansas quarterbacks as the Razorbacks have started five players at the position the last two years, but coach Sam Pittman wants more security.

“He has to be more conscious with the football,” Pittman said. “He’s got to take care of the football. We were right in the game and he threw a pick-6. Part of that was the receivers ran into each other. I thought we were very sloppy with formations, alignments on offense.”

Whether Bennett starts next week or not, the way his last three years of football have gone, he isn’t worried about it.

“The only people you can listen to is the people close to you and yourself,” he said. “The decision is never made. That’s all you have to do is keep working every day.”

Georgia: The Bulldogs struggled offensively for much of the first half. They figured it out in time to roll past the Razorbacks, but they are going to need more consistency to contend in the SEC this season.

“Really sloppy first half. Felt like I was in an extra-innings baseball game,” Smart said. “I thought we were very stagnant and (took) undisciplined penalties. Every time we had something going, we’d shoot ourselves in the foot. You can’t win football games doing those things. We’ve got to improve and get better.”

Arkansas: The Razorbacks haven't won an SEC game in almost three years, so a halftime lead against the Bulldogs is a positive step.

Even with their uneven play, the Bulldogs could move up in the AP poll after No. 3 Oklahoma lost to Kansas State.

Georgia open its home schedule against No. 8 Auburn next Saturday.

Arkansas travels to Mississippi State for its first road game of the season.