Big 12 only 2 games, as planned and not any new COVID issues 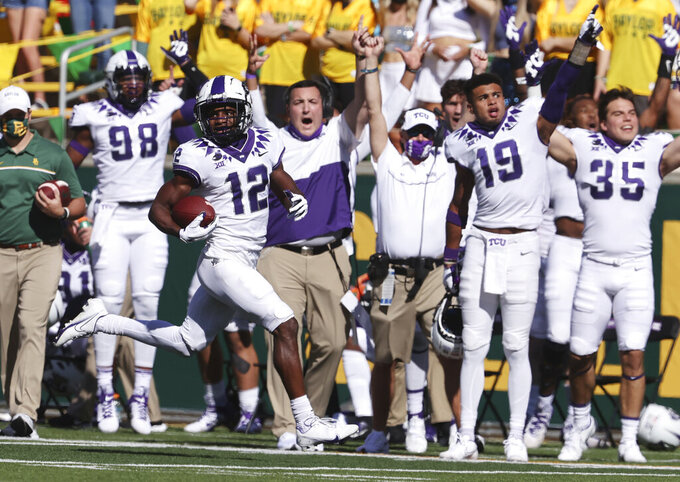 TCU wide receiver Derius Davis scores on a punt return over Baylor in the first half of an NCAA college football game, Saturday, Oct. 31, 2020, in Waco, Texas. (Rod Aydelott/Waco Tribune-Herald via AP)

Some things to watch in the Big 12 Conference on Saturday, when there are only two games scheduled and the six other teams are off — as planned, not because of any recent COVID-19 issues.

TCU at West Virginia. The Horned Frogs (3-3, 3-3 Big 12) and Mountaineers (4-3, 3-3) came into the Big 12 together in 2012, and have split their eight games as conference foes. TCU, coming off its first home win, is 3-0 on the road with all of those being conference games. But the Frogs lost by 37 and 24 points in their last two trips to Morgantown. West Virginia is the only Big 12 team without a home loss while alternating wins and losses this season. The Mountaineers, who lost 17-13 last week at No. 21 Texas, have the league's top defense, allowing only 271 total yards a game.

Baylor at Texas Tech. For the first time since 2008, the Bears and Red Raiders play on Texas Tech's campus in Lubbock. This series was played at a neutral site 10 seasons in a row — nine times at the home of the NFL's Dallas Cowboys and another at Cotton Bowl Stadium — before Baylor won 33-30 in double overtime at home in Waco last season. The Bears (1-4, 1-4) have lost four in a row since beating Kansas in their season opener. Texas Tech (2-5, 1-5) has lost its last two and will have a losing record in Big 12 play for the 11th season in a row.

Iowa State is 5-1 in conference play for the first time in school history — in any league. ... Oklahoma has had consecutive games with six rushing touchdowns, the first Big 12 team to do that since Kansas State in 2002. ... The Sooners defense has 20 sacks the last four games.

The revised Big 12 schedule left some late-season open dates for teams to potentially use for makeup games if needed because of COVID-19 outbreaks. The teams playing this week are scheduled to be off Nov. 21, when the other six teams do have games. The only conference game postponed so far was Oklahoma State at Baylor on Oct. 17, though the Bears couldn't make that up this week because they already had a scheduled game. That game was rescheduled for Dec. 12, making it likely the Big 12 championship game will be played Dec. 19.

TCU junior Derius Davis is second nationally with his 21.8-yard average on punt returns, behind only Kansas State sophomore Phillip Brooks (23.7 average, two touchdowns). Davis returned a punt 67 yards for a touchdown against Baylor two weeks ago, and last week had four returns for 103 yards, including returns for 20 and 50 yards to set up TDs against Texas Tech. He has 10 career punt returns, two for TDs.