Big Ten punters just keep turning up from down under 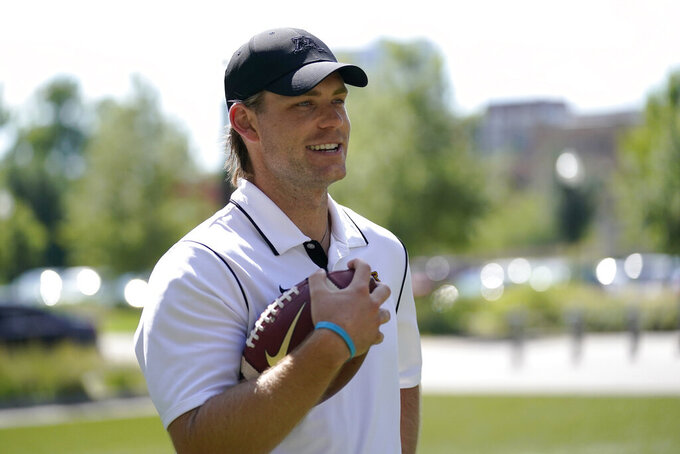 Minnesota NCAA college football punter Mark Crawford speaks to the media during an interview Monday, Aug. 29, 2022, in Minneapolis. From Rutgers standout Adam Korsak to Minnesota's Mark Crawford, half of the primary punters in the Big Ten this season are products of Prokick Australia. (AP Photo/Abbie Parr)

MINNEAPOLIS (AP) — Big Ten territory will soon stretch to the West Coast with UCLA and USC, after the seismic expansion finalized this summer.

On fourth downs, the footprint stretches much wider than that.

Half of the league's 14 programs this season have a primary punter produced by Prokick Australia, the development academy from Down Under supplying major college football with game-ready special teamers at a remarkable rate.

Evans is from New Zealand. The others are Australians, as is Korsak’s replacement-in-waiting, freshman Flynn Appleby. Jude McAtamney, the kicker for the Scarlet Knights, is another former Prokick pupil from Ireland.

“We all know each other and give each other a bit of lip every now and then," said Crawford, a native of Perth in his third year with the Gophers.

The Aussies have relished pregame and offseason connections in a place where a visit from parents is rare and the adjustment to climate, dialect and culture in Big Ten country is significant.

“Even now the words they say, it gets confusing sometimes,” said Evans, a second-year player who inherited the Hoosiers job from Prokick alum Haydon Whitehead. “When I’d go to order coffee, I’d say my name was James, and probably four or five times they said, ‘Jess?’ I said no, ‘It’s James, like one of the most common names.’”

One of Crawford's closest friends at Prokick was Taylor, who downed seven of his 10 punts on Saturday inside the 20-yard line for a gross average of 47.9 yards per attempt in a 7-3 win over South Dakota State. He was an easy selection for Big Ten Special Teams Player of the Week.

"I’m a pretty relaxed guy out there. I just try and catch it and kick it as far and as high as I can,” said Taylor, a third-year native of Melbourne.

Korsak was a first team preseason Associated Press All-America team pick who set the NCAA record for net average in 2021 and became the gold standard for his peers. The Melbourne native put cricket, golf and Australian Rules Football pursuits on the back burner to enroll in Prokick.

“I love Rutgers so much,” said Korsak, who moved on to two Master's programs after getting his undergraduate degree. “Every minute of it.”

“If there was going to be some longevity or an influx of Australians down there to kick, then they needed to be taught and helped along the way so they don’t make silly mistakes that shorten their attempt. I put my name on a business card and got to work,” said Chapman, who signed with Green Bay in the 2004 offseason before being cut at the end of training camp.

Prokick alumni have accounted for six of the last nine Ray Guy Award winners, given annually to the best punter in college football. Last season, more than 40% of FBS punters were Prokick alums. James Burnip (Alabama) even gave the program a spot in the national championship game.

The program has landed full scholarships for 190 players and counting, boasting a better than 90% placement rate for entrants whose skills, character and academics are deemed worthy of acceptance. The baseline on the initial assessment is a 45-yard, 4½-second kick. Practice sessions are typically three times per week, with strength and conditioning sessions on the side.

Time in the program varies by participant. When a college team calls Prokick in search of a punter for that next recruiting class, the process can accelerate quickly.

The first American football game Crawford ever watched was the Super Bowl less than seven years before he boarded an airplane for the 30-plus-hour trek to Minnesota. He arrived about two months before COVID-19 shut down spring practice and forced him to practice at a park across the street.

Earlier this year, he was able to travel home to visit his parents for the first time in 2½ years — and show off some life skills gained from the discipline and structure inherent to college football.

“I was making my bed. I was making sure everything was clean and my mom was like, ‘What’s going on with you? What are they doing to you?’” Crawford said.

Australian rules kicks are made on the run and usually travel end over end, so there's much to instruct about the American style — and environment.

“Some appreciate and understand the high-pressure situation they’re going into, and some take a while. They think it’s just kicking a football. They might see the crowds on TV and think that’s fun, but they don’t associate the time and the pressure and the effort it’s going to take," Chapman said last month in a video interview from Melbourne.

These punters are used to being far more involved in Australian rules: think quarterback, running back and tight end rolled into one. With the exception of Taylor's recent busy afternoon, work here can be much slower. Crawford punted only once in Minnesota's 38-0 win over New Mexico State.

Chapman and his staff watch as much of their former pupils in action as possible. With Melbourne 15 hours ahead of Minneapolis, that means a Sunday session in front of the TV could last from 2 a.m. to 2 p.m.

"It’s a long day of scrolling through football games looking for punts to come out,” Chapman said with a big laugh.

These Aussies are often “older blokes,” as the 28-year-old Crawford put it. Oklahoma State’s Tom Hutton is 32. That's not too old to dream of the NFL, of course, with Seattle’s Michael Dickson, Houston’s Cameron Johnston, Philadelphia’s Arrynn Siposs and San Francisco’s Mitch Wisnowsky currently giving Prokick a presence in the league. The worst-case scenario is usually a college degree at a well-regarded institution.

“We pick the right player, and we know they will be able to compete and handle the pressure in that environment,” Chapman said. “That’s big boy football right there in the Big Ten, so they need to know their stuff.”