Boomer Sooner to Baylor for Top 25 showdown in Big 12 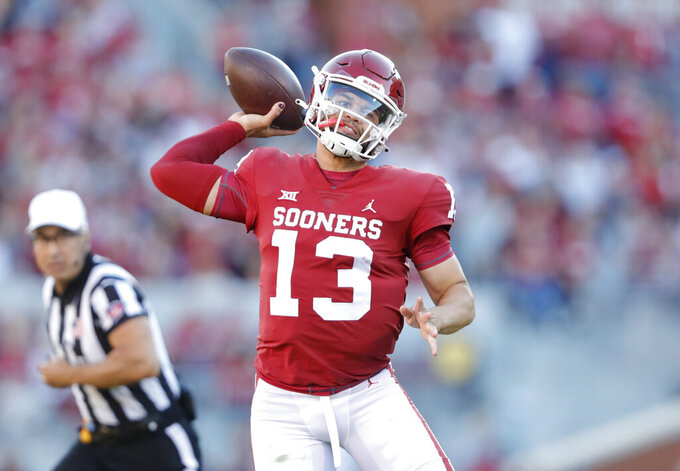 Things to watch in Week 11 of the Big 12 Conference:

No. 4 Oklahoma at No. 18 Baylor. The six-time defending Big 12 champion Sooners (9-0, 6-0 Big 12, No. 8 CFP), after their open date, play the first of three games in a row against the teams closest to them in the standings. They will then very likely meet one of them again in the Big 12 title game on Dec. 4, assuming they make it. Baylor (7-2, 4-2, No. 13) is coming off a tough loss at TCU. The Bears already beat Iowa State but lost at No. 10 Oklahoma State (8-1, 5-1, No. 10), the second-place team. Oklahoma has an FBS-best 17-game winning streak, and has averaged 46.3 points in freshman quarterback Caleb Williams' three starts after he came off the bench to lead a comeback from a 21-point deficit to beat Texas. The only time Oklahoma had a bigger comeback was in its last visit to Waco two years ago, a 34-31 win after Baylor led 28-3 early in the second quarter. The Sooners beat Baylor in overtime in the Big 12 title game three weeks after that.

Quarterback Skylar Thompson and surging Kansas State (6-3, 3-3) vs. West Virginia. The Wildcats have won three games in a row to get bowl eligible. Thompson has five consecutive 200-yard passing games, the first such stretch for a K-State QB since 2014. West Virginia (4-5, 2-4) has won the last five games in the series, but the Mountaineers are coming off a 24-3 loss to Oklahoma State.

Oklahoma has 23 consecutive wins in November games since 2014, with 11 of those against Top 25 opponents. ... Oklahoma State has held its last two opponents to a combined total of six points and an average of 138 total yards. ... Erik Ezukanma is on track to become the first player to lead Texas Tech in yards receiving three consecutive seasons since Wayne Walker from 1985-87. Ezukanma is second in the Big 12 with 78.9 yards receiving per game (631 total). He had a career-high eight catches for 123 yards against Oklahoma in the last game. ... TCU quarterback Chandler Morris had 531 total yards (461 passing/70 rushing) against Baylor in his first career start.

While Texas (4-5, 2-4) should end a four-game losing streak, the Longhorns could have a hard time covering the spread against Kansas (1-8, 0-6). Texas is listed as a 30 1/2-point favorite, according to FanDuel Sportsbook. The Longhorns have scored 24 points or less in their last three games. Two years ago in Austin, Cameron Dicker's 33-yard field goal as time expired gave Texas a 50-48 win over the Jayhawks. The teams exchanged six touchdowns, two field goals and a blocked extra point for a 2-point safety in a frantic fourth quarter.

Iowa State junior defensive end Will McDonald's 20 1/2 career sacks over the past two years are the most nationally in that span. He is now the career leader for the Cyclones with 27 1/2 after his 2 1/2 sacks last week against Texas that were his most in a single game. He has at least one sack in 18 of his last 24 games.