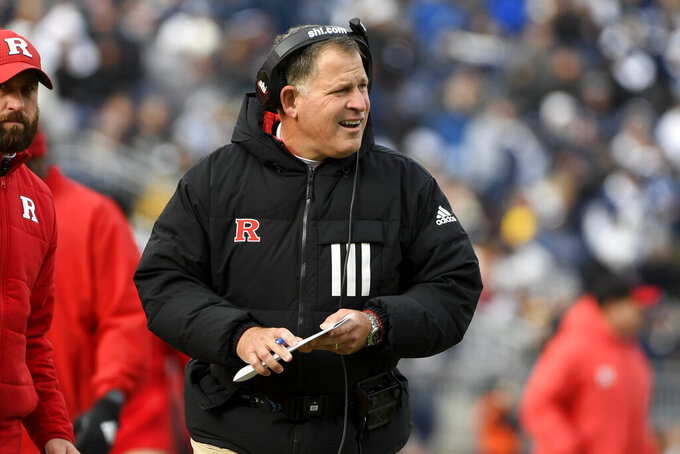 Line: Boston College by 7½, according to FanDuel Sportsbook.

In his third season, Boston College coach Jeff Hafley is trying to lead the Eagles out of a rut in which they have won no more than seven games since 2009. Rutgers has not beaten BC in 14 tries (0-13-1) since 1991, when both schools were in the Big East.

Both offensive lines are works in progress. Rutgers coach Greg Schiano brought in 13 new offensive linemen to deal with the team's biggest weakness in 2021. Hollin Pierce is expected to return at right tackle and Ireland Brown probably will move from left guard to center. The rest of the line is uncertain with transfers Willie Tyler (Louisiana-Monroe), J.D. DiRenzo (Sacred Heart), Mike Ciaffoni (Colorado State) and Curtis Dunlap (Minnesota) all in the mix.

BC's offensive line was a strength last year, but all five players from that unit are gone, with guard Zion Johnson one of four 2021 Eagles on NFL rosters. Tackles Jack Conley and Ozzy Trapilo, with two starts apiece, are the only two OL members with starting experience. Center Drew Kendall redshirted as a freshman last year after making two appearances.

Rutgers: Noah Vedral, Gavin Wimsatt and Evan Simon competed for the quarterback job and Schiano says he may play more than one until a starter emerges. Cornerback Avery Young has played more than 3,000 snaps for the Scarlet Knights. Australian punter Adam Korsak averaged 45.25 yards nets and landed 38 punts inside the 20-yard line last season.

Boston College: Notre Dame transfer Phil Jurkovec has produced (914 yards, 7 TD) when he has remained healthy. He missed six games last year with a broken bone in his hand. WR Zay Flowers (44 catches, 746 yards, 5 TD) passed on the chance to go pro to return for his senior year. Pat Garwo III (205 carries, 1,045 yards, 7 TD) is back at running back.

Rutgers is 9-4 in openers in Schiano's two stints as coach. ... Hafley served under Schiano as Rutgers defensive backs coach in 2011. He followed Schiano to the Tampa Bay Buccaneers and was his secondary/safeties coach in 2012-13