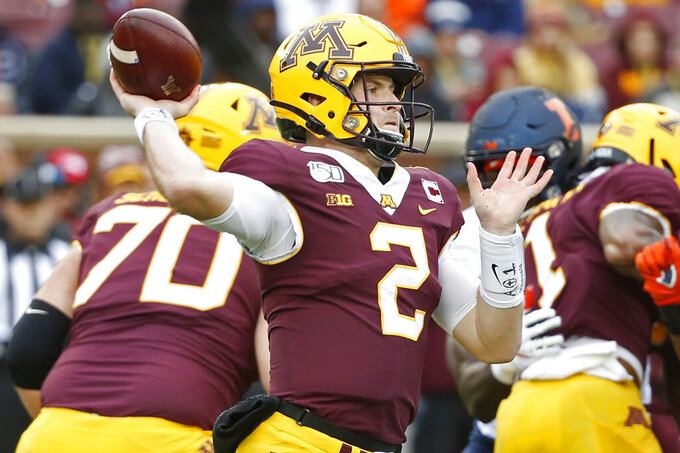 MINNEAPOLIS (AP) — The weather in Minnesota this weekend is forecast to turn wintry.

These Gophers are more than ready for that.

With the game on Saturday against Nebraska on track for the coldest night-time kickoff temperature since TCF Bank Stadium opened in 2009, the unbeaten Gophers (5-0, 2-0 Big Ten) have prepared all week for the likelihood of a less-than-firm grip on the ball with a variety of exercises. Plus, there's no better remedy for such conditions than their seasoned running back duo of Rodney Smith and Shannon Brooks that combined for 322 rushing yards last week against Illinois.

"We love the cold. No doubt. That's our mentality," defensive end Carter Coughlin said. "You come up to Minneapolis, and it's our weather, you better be ready to play in it, because we're going to be."

The skill position players were directed to dip their hands in ice buckets between every series in practice this week, the footballs used were frozen and wet, and the thermostat in the indoor facility was turned down to the upper 50s. Even the defense had ice and water dumped down the backs of their jerseys, just in case.

"You wouldn't want to look back and say, 'I wish I would've done something to prepare for that,'" Coughlin said. "We're doing everything we can."

When Minnesota hosted Michigan State on Oct. 31, 2009, the kickoff temperature was 39 degrees (3.9 Celsius). The forecast is calling for slightly colder than that, with a chance of snow. The coldest pre-November game ever held at TCF Bank Stadium was against Purdue on Oct. 10, 2009, at 31 degrees (minus 0.5 Celsius).

The Huskers (4-2, 2-1) aren't about to be psyched out by the chill. They've played in these conditions before. Hey, their head coach's name is Scott Frost, after all.

"I have no control over the weather, so it's one of those things where God blessed us with the day, so just be thankful for it," defensive lineman Darrion Daniels said. "I'm not used to playing in cold weather, but I get used to it. After warmups, I'll be straight."

"We're in a lot better place at the quarterback spot than we were a year ago at this time," Frost said. "We feel like we've got several guys who know the offense and are talented enough to make things happen."

The Gophers held the Illinois offense to three points last week, a stark improvement from the year before when the Illini totaled 646 yards in a lopsided victory.

"Everything that you saw on Saturday, we'd practiced at that intensity for the entire week," Coughlin said. "That's something that was kind of missing."

Maurice Washington was Nebraska's leading rusher through four games, averaging 7.7 yards per carry, but over the last two games he has run a total of nine times for a net of 10 yards.

Washington, who's facing charges in California in connection with a child pornography case, was suspended for the first half of the opener against South Alabama and again for the first half against Northwestern last week. After the Huskers kicked the winning field goal as time ran out, Washington ran directly to the locker room.

"We hold our players to a certain standard and we want them all to live up to that standard," Frost said. "We held him out the first half. We'll see how he responds this week. We want him to come back and prepare well and get ready to play well and, if he does, this will all be water under the bridge."

The accuracy of freshman center Cam Jurgens' snaps in the shotgun formation has been one of Nebraska's biggest concerns. The Associated Press counted seven snaps against Northwestern that required the quarterback to jump to catch it, including one that sailed past Vedral.

"There is no excuse for it now," said right tackle Matt Farniok, a team co-captain. "In week seven we need perfect snaps, and it is just the number one rule of our center, and that is what we expect from our center. He knows he needs to fix it, and he has been working on it."

Both teams have been outscored by their opponents this season in third quarters, though Minnesota scored on its first such possession in the last two games. Nebraska has struggled mightily coming out of the half. In four straight games, the Huskers have given up a touchdown or a field goal on the first defensive series of the second half, and the offense has punted on its first possession. Frost has made this an issue with his players.

"I don't know whether to line them up and scrimmage for a couple plays before we start the second half," Frost said.