California trying for upset at No. 13 Oregon 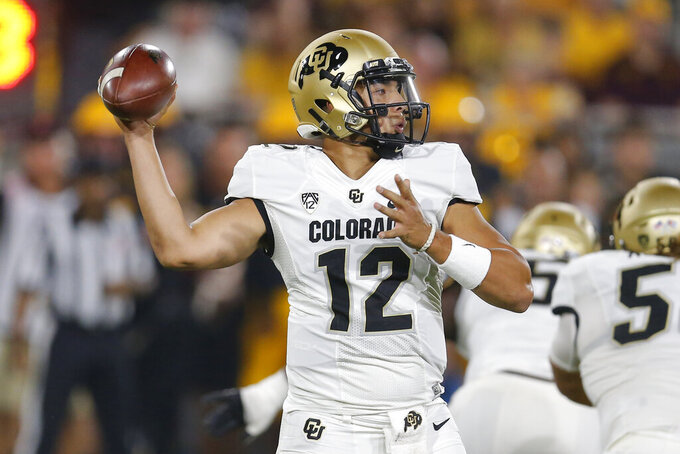 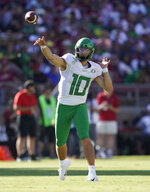 GAME OF THE WEEK: California at No. 13 Oregon. The Golden Bears (4-1, 1-1 Pac-12) have a tough task ahead when they travel to face No. 13 Oregon. Cal started the year with a 4-0 record before losing to Arizona State last week and it also lost starting quarterback Chase Garbers to an apparent shoulder injury. Now the Bears will turn to Devon Modster, a transfer from UCLA who struggled against Arizona State after replacing Garbers. The Ducks (3-1, 1-0) are rolling after a season-opening loss to Auburn and haven’t given up a touchdown in three straight games for the first time since 1935.

MATCHUP OF THE WEEK: Arizona at Colorado. The Wildcats (3-1, 1-0) showed they can win without starting quarterback Khalil Tate when backup Grant Gunnell threw for 352 yards and a touchdown in his first career start in a 20-17 victory over UCLA. Arizona has won three straight games since a season-opening loss to Hawaii. Colorado (3-1, 1-0) has had a week off to prepare for Arizona after beating Arizona State 34-31 on Sept. 21. It was the first time the Buffaloes beat a nationally ranked road opponent in 17 years. Steven Montez leads the Colorado offense after throwing for 337 yards and three touchdowns against the Sun Devils.

INSIDE THE NUMBERS: Two starting Pac-12 quarterbacks (Garbers, UCLA’s Dorian Thompson-Robinson) couldn’t finish games last week because of injury. If two new quarterbacks start in their place, that would be 17 starting quarterbacks for the league’s 12 teams through the season’s first six weeks. ... Oregon State’s Jake Luton, Oregon’s Justin Herbert and Utah’s Tyler Huntley are three of the eight FBS quarterbacks who have had at least 100 pass attempts this season without an interception. ... Colorado’s two wins over ranked opponents match its total from the last nine seasons combined. ... California LB Evan Weaver has had at least 10 tackles in 12 straight games dating back to last year. ... Oregon’s Herbert has thrown a touchdown pass in 32 straight games, a streak that’s tops in the country. ... Four Pac-12 teams _ Arizona State, Utah, USC and Washington State _ are off this week.

PLAYER TO WATCH: UCLA RB Joshua Kelley had a season-high 127 yards rushing in last weekend’s loss to Arizona. It was his seventh career game with over 100 yards on the ground. The Bruins will need a lot more of Kelley’s production if they want to turn around their season after a 1-4 start, especially if Thompson-Robinson is out for an extended amount of time.

UPSET WATCH: No. 15 Washington at Stanford. The Huskies (4-1, 1-1) are a 16 1/2-point favorite when they travel to face Stanford on Saturday. That makes sense considering they rebounded from an early-season loss to California with three straight impressive victories over Hawaii, BYU and USC. But the Cardinal (2-3, 1-2) are at home and finally have a little momentum after beating Oregon State 31-28 last weekend. Stanford’s Davis Mills completed 18 of 25 passes for 245 yards and three touchdowns in his second start of the season.