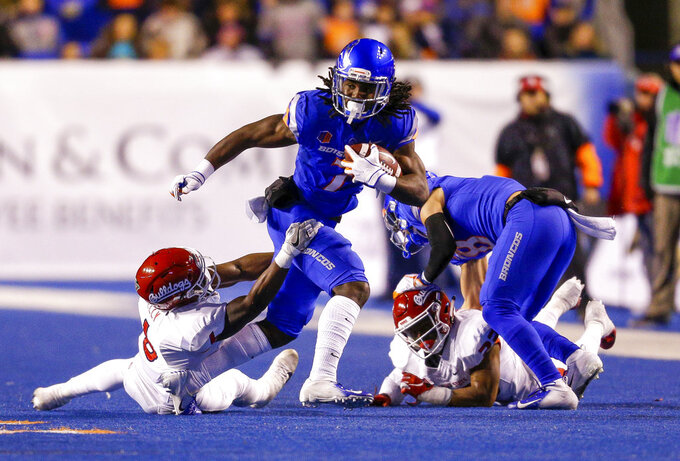 Boise State wide receiver A.J. Richardson (7) tries to break away from a Fresno State defender after a reception during the first half of an NCAA college football game Friday, Nov. 9, 2018, in Boise, Idaho. (AP Photo/Steve Conner)

BOISE, Idaho (AP) — Brett Rypien threw for 269 yards and Alexander Mattison rushed for 143 yards and a pair of touchdowns to lead Boise State to a 24-17 upset over No. 16 Fresno State on Friday night.

Fresno State (8-2, 5-1) entered the game as the nation's No. 2 scoring defense and had only given up three touchdowns in conference play before facing the Broncos.

Rypien, who became the Mountain West's all-time passing leader in both yards and receptions, hit Khalil Shakir in stride on a 49-yard scoring strike with 9:22 remaining in the fourth quarter to give the Broncos a 24-17 lead.

Leading 10-3 at halftime, Fresno State appeared to take control of the game by driving 75 yards on the opening possession of the second half and scoring on a 1-yard run by Ronnie Rivers for a 17-3 advantage.

But Boise State stormed back, scoring on consecutive possessions on a pair of short runs by Mattison to knot the score at 17.

The win was the fourth straight for the Orange, while Louisville lost its seventh straight. The eight wins tied the most victories for Syracuse in a regular season since 1998.