Column: No jab, no job: Rolovich gets pink-slipped at Wazzu 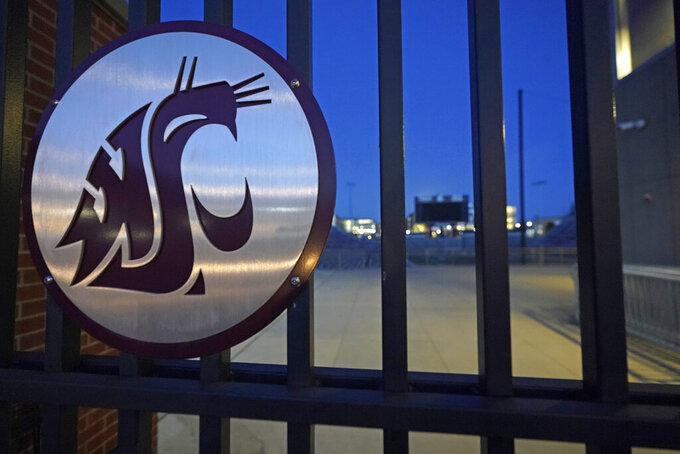 The Washington State Cougar logo is displayed on a gate at Martin Stadium, Monday, Oct. 18, 2021, in Pullman, Wash. Head football coach Nick Rolovich and four of his assistants were fired on Monday for refusing a state mandate that all employees get vaccinated against COVID-19, making him the first major college coach to lose his job over vaccination status. (AP Photo/Ted S. Warren)

You’re never going to convince guys like ex-Washington State coach Nick Rolovich to get the shot. It’s a waste of breath.

The best scientists and all the evidence in the world couldn’t. Losing a $3 million-a-year job didn’t. Even public pleas from the likes of Alabama’s Nick Saban, Clemson’s Dabo Swinney and Georgia’s Kirby Smart — guys who command genuine respect in the business — failed to make a dent.

Rolovich, who was hired in January 2020, was fired for cause by the university Monday after blowing through a deadline mandating that state employees get vaccinated against COVID-19.

Despite being Washington state's best-paid employee, he has yet to explain why. Four assistants who similarly refused the jab joined him on the unemployment line. If this was supposed to teach his players a lesson about personal responsibility, it backfired. Rolovich owns every bit of this.

“This is a tough day for Washington State football,” athletic director Pat Chun said, announcing the firings at a news conference where he also said Rolovich’s request for a religious exemption was denied.

Except that Rolovich did. He said in July he wouldn’t get vaccinated, and despite knowing it could mean he’d be forced to walk away from his team in midseason, he repeated it Saturday, not long after a win over Stanford.

“I’ve been settled for a long time on it. I believe it’s going to work out the right way. If that’s not what Pat (Chun) wants,” Rolovich said, “then I guess I’ve got to move on.

“But I like being here, I like being the coach here,” he added. “I love these kids. I’ve just got faith in it.”

If that’s the case, maybe Rolovich should have shared some of the reasons for his faith before it came to this. He didn’t, likely because there aren’t any. All he said was “for reasons which will remain private. … I will not comment further on my decision.”

Let’s be clear: There’s not a college coach in the country popular or successful enough to defy the law and get away with it, and none who want to repeat the mess that was the pandemic-interrupted 2020 season. Rolovich, it turns out, isn’t exactly flush on either count.

Though the Cougars have won three straight, he’s 5-6 overall — three WSU games were canceled last season as a result of COVID-19 — and Cougars fans were already growing restless. Rolovich might be a minor cause celebre at the moment, but when the rest of the college football world moves on, he’ll be a footnote, likely remembered most for matching the shortest tenure at any Pac-12 school in the last 60 years.

In the bargain, he became exactly the kind of distraction that coaches are always warning their players about. And unlike NBA star Kyrie Irving, who last week became sport's best-known anti-vaccination advocate, there's a good chance Rolovich has overestimated his value.

June Jones, who mentored Rolovich during his time on the staff at Hawaii, always found him a handful. For that reason alone, Jones was one of the most public members of the fraternity urging his former assistant to change his mind.

“He was a quarterback, kind of his own guy, a leader,” Jones said recently. “He’s been that way as a coach. He believes that he doesn’t need to take it and doesn’t want to take it, and he doesn’t want somebody telling him what to do.”

What goes around, though, comes around. Only last year, Rolovich effectively chased off sophomore receiver Kassidy Woods after the player first expressed concerns about opting out of the season to safeguard his health and then informed the coach of his planned involvement with a Pac-12 players’ rights movement that was gaining strength at the time.

“I’d call it a dramatic irony,” Woods said about Rolovich’s predicament in an interview with The New York Times. He wound up transferring to Northern Colorado and has filed a lawsuit against his former coach and Washington State.

The answer is no, apparently, at least not if it requires the kind of sacrifice Rolovich expects from everybody but himself.