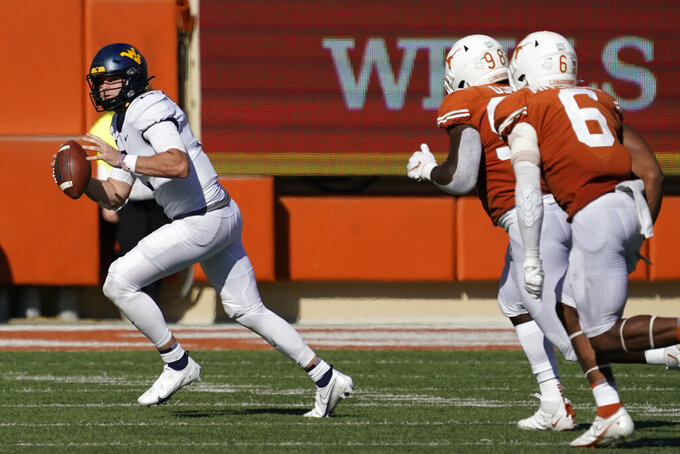 Max Duggan pulled out his old bag of running tricks in TCU's last game to give the Horned Frogs even more momentum in turning around their season.

The mobile sophomore was impressive with his arm over the first month while averaging under three yards on the ground. Then came a rushing burst a week ago, and that's put the Big 12's top defense at West Virginia (4-3, 3-3 Big 12) on alert as the Horned Frogs (3-3, 3-3) try to reach an elusive winning record Saturday.

Duggan set career highs with 19 carries for 154 yards and three touchdowns in a 34-18 win over Texas Tech last week. He has six other games with 70 or more rushing yards, but five of those occurred last season.

“Whether they’re running the ball efficiently or not, I think he is a factor in their running game, and he’s elite at it,” said West Virginia defensive backs coach Jahmile Addae. “The kid’s a good football player.”

The Mountaineers limited Duggan's effectiveness both with his legs and arm in pulling out a 20-17 win in the 2019 regular-season finale. West Virginia is much stronger on defense this season, holding opponents to a league-low 271 yards, including 109 on the ground.

They're just not exactly sure what to expect this time out of Duggan. And Duggan's teammates simply trust him no matter what he decides to do.

“We know he can run if things aren’t going good in the passing game,” said TCU center Steve Avila. “We always have that option, and it’s expected from him.”

TCU has won two straight after losing three of its first four games. The teams have split their eight meetings as conference foes since both joined the Big 12 in 2012.

Some other things to know about TCU and West Virginia:

West Virginia coach Neal Brown said he's hopeful running back Leddie Brown will be ready Saturday after he was hurt while blocking on the first play at Texas. The junior stayed in the game and finished with 47 yards on 15 carries, including a touchdown.

If the Big 12's No. 2 rusher is unable to go, Alec Sinkfield would get the start. Sinkfield ran for 123 yards in the season opener against Eastern Kentucky.

West Virginia quarterback Jarret Doege has the solid backing of his coaching staff despite being unable to get the Mountaineers into the end zone on both fourth-quarter drives from inside the Texas 20 last week. Both times, Doege’s passes fell incomplete on fourth-and-1.

Doege is a close second in the Big 12 to Oklahoma’s Spencer Rattler with 287 passing yards per game and his 184 completions leads the league. The junior has completed at least 64 percent of his passes in five of seven five games. Doege threw for 317 yards in the loss at Texas.

“We’re very happy with where he’s at,” Parker said.

Seven games into the season, TCU will make its first trip outside of the state of Texas and the first one on a plane. TCU coach Gary Patterson said Morgantown, West Virginia, is one of his favorite places to play, due in part to the atmosphere.

“I’ve always loved going to West Virginia because their fans are so rowdy about their football," he said. "The more names I get called, the more fun it is.”

West Virginia will face a top-notch returner on special teams for the third straight game.

TCU junior Derius Davis is second nationally with an average of nearly 22 yards per punt return. He scored on a 67-yard return against Baylor two weeks ago. Last week he had returns of 20 and 50 yards to set up TDs against Texas Tech.

TCU is 2-0 on the road with wins at Baylor and Texas. But the Frogs lost by 37 and 24 points in their last two trips to West Virginia.