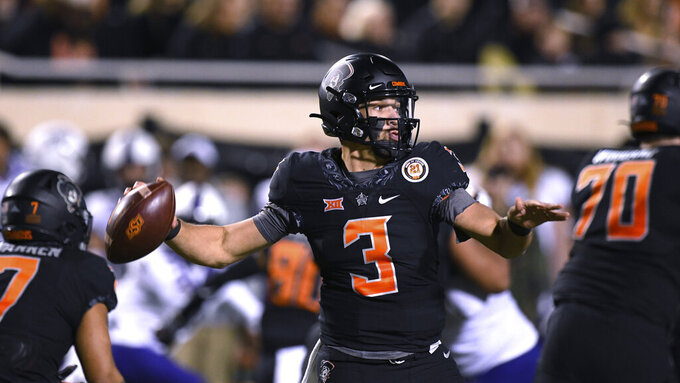 LUBBOCK, Texas (AP) — Ninth-ranked Oklahoma State has been dominant on defense all season, won its last three games by an average margin of nearly 40 points with an offense starting to resemble the Cowboys of old and controls its own fate in getting to its first Big 12 championship game.

Mike Gundy, the Big 12's longest-tenured coach by more than a decade, has plenty of reasons to feel good about the state of his team.

“For us, me personally, I’m comfortable with where we’re at because I see more strength in our organization now than in my 17 years as head coach,” Gundy said. “We have a team right now that when they go out and play on Saturday, it doesn’t make a difference who we play, but that we know ... that if we play well, we can win. I don’t care who we play. So, for me, that’s a plus.”

The Cowboys (9-1, 6-1 Big 12, No. 9 CFP) could clinch a spot in the league title game as early as Saturday night, with a win at Texas Tech (6-4, 3-4) combined with a loss by No. 11 Baylor at Kansas State earlier in the day. Oklahoma State then finishes the regular season with the Bedlam showdown in potentially the first of two meetings in back-to-back weeks against No. 12 Oklahoma, the six-time defending Big 12 champion.

Texas Tech, after a midseason coaching change, is bowl eligible for the first time since 2017 after Jonathan Garibay kicked a 62-yard field goal on the final play for a 41-38 win over Iowa State last week. It was the first home game for the Red Raiders since coach Matt Wells was fired after a 25-24 loss to Kansas State on Oct. 23, when they led 24-10 at halftime.

That was also their first game since former Baylor associate head coach Joey McGuire was named Tech's new head coach, though he won't take over the on-field duties until after the season.

Interim head coach Sonny Cumbie said the win over the Cyclones was a reminder for the Red Raiders that they are a pretty good team when they play together.

“I think they’re starting to believe it a little bit more and hopefully we can continue to stack success,” Cumbie said. “That's the greatest challenge, is so many teams and so many people handle success far worse than they handle failure. So we got to be able to handle success.”

The Red Raiders, who haven't won consecutive Big 12 games since October 2018, want to do more than just get bowl eligible.

“We came here to finish out the season strong, and Cumbie is always discussing with us staying together and believing in each other,” receiver Erik Ezukanma said. "It’s finally paying off on the field, and it’s bringing us all together.”

Only two touchdowns have been scored against Oklahoma State in the past three games. Both of those were by TCU, which trailed 49-3 in the fourth quarter last week before a TD run and a fumble return for a score. Oklahoma State held West Virginia to only 133 total yards the previous week.

Redshirt freshman Donovan Smith completed 25 of 32 passes for 322 yards and three touchdowns in his first start for Tech against Iowa State. He filled in for Henry Colombi (illness), who had started five games after Tyler Shough broke his collarbone in the fourth game.

“Not bad for a third-string quarterback. I had a lot of confidence in Donovan Smith,” Cumbie said.

Cumbie said Smith, the son of Red Raiders running backs coach DeAndre Smith, would start again Saturday night. Cumbie also said there were no setbacks for Shough, but that the transfer quarterback from Oregon wasn't medically cleared to clear.

Oklahoma State junior quarterback Spencer Sanders has nine TD passes and only two interceptions in the past five games since throwing three picks against Baylor.

“I think he’s made good decisions. At times he throws the ball away and other times he tucks it and runs,” Gundy said. “He’s getting a better feel for that, in my opinion, as this year has progressed.”

Oklahoma State senior running back Jaylen Warren has averaged 124 yards rushing in the last eight games (seven starts). ... The Cowboys could reach 10 wins for the 10th time in program history, and seventh time since 2010. ... Texas Tech is 43-17 (.717 win percentage) in night games at home since 2002.