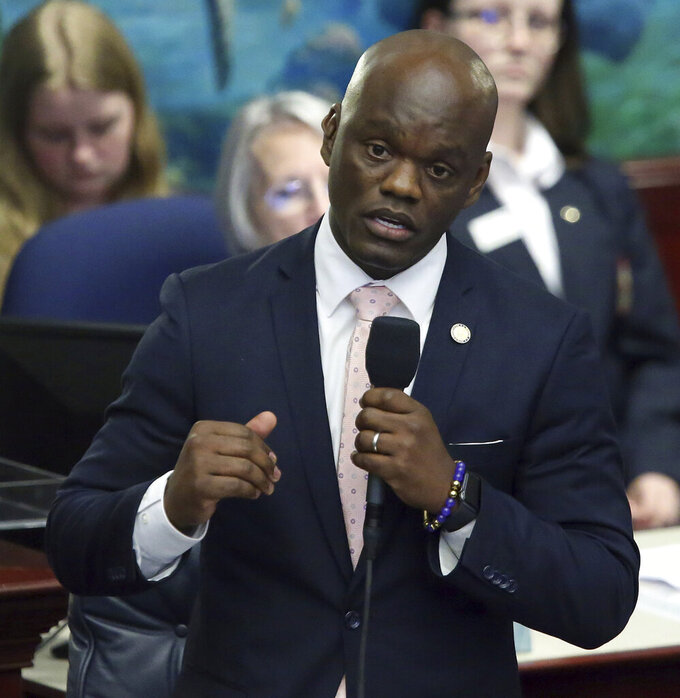 With a bounty of marquee college sports programs, Florida could help student athletes flex their muscles as they take on the NCAA, which governs college athletics and has long resisted calls to allow student athletes to profit from their collegiate sports careers.

Florida Gov. Ron DeSantis gave the effort in Florida a political boost Thursday when he appeared with a bipartisan group of lawmakers and two former star football players from Florida State University.

"When I look for good policy ideas, California is usually not the first place I look. But I think California is on the right track," said DeSantis, a Republican.

"California did the first step. If Florida then follows suit — it's not as if Delaware is doing this — these are really big powerhouse states when it comes to college athletics," DeSantis said, "and I think that's going to require the NCAA to reevaluate."

A proposal by state House Democratic Leader Kionne McGhee is modeled after one signed into law last month by California Gov. Gavin Newsom that allows college athletes in the Golden State to sign endorsement deals and hire agents without endangering scholarships and their eligibility to participate in NCAA-sanctioned sports.

Florida has more than 11,000 student athletes, many who play sports that might not get the same limelight as football and basketball but nevertheless achieve acclaim in their own sport, according to Rep. Chip LaMarca, a Republican who has introduced his own proposal. His legislation, if approved, would go into effect as soon as next summer and may include financial literacy education.

The NCAA had urged California's governor to reject the legislation, arguing that "it would erase the critical distinction between college and professional athletics" and would now give California schools unfair recruiting advantage.

College sports, particularly football and basketball, generate billions of dollars in revenue, with the NCAA itself getting about $1 billion annually.

While some college football coaches are among the biggest money earners in sports, college athletes aren't allowed a share of the profit.

"We're sick and tired of seeing the hypocrisy that happens within the classroom setting, where young athletes are taught about capitalism and taught about the free market," he said, "but are being told on the other hand that they cannot participate in it because they have a gift."

The California law, the first of its kind, does not go into effect until 2023 and other states are also considering delaying implementation of any legislation to give the NCAA time to consider addressing the issue on its own.

But with the effort in Florida and a growing number of other states considering similar measures — including Georgia, Minnesota, New York and South Carolina — the NCAA may be forced to into a speedy reckoning of its rules.

Georgia state Rep. Billy Mitchell, who is sponsoring the Georgia measure, worries that moves in California and Florida would put Georgia schools at a disadvantage in recruiting athletes.

"Everyone around these student athletes can be handsomely compensated, but the athletes themselves who produce the opportunity for that kind of revenue cannot," Mitchell said.

"If you are an academic scholarship student, there's nothing in the rules that prohibit you from writing a book or giving speeches or giving out your autograph for sale," he said.

"It's important to every student athlete that is walking on campus that doesn't have time to go work from 9-to-5 and still commit to their studies and commit to practice," said Simon, who grew up in a single-parent family who took out loans every semester to ease the financial burdens on his mother.

Even with an athletic scholarship, he said, "I had to take out a loan just so I could get the necessities I needed."

With the advent of social media, people with all sorts of talents (or not) now have platforms to showcase and monetize themselves by generating ad revenue.

In 2017, the NCAA forced Donald De La Haye, a kicker, to choose between a spot on the University of Central Florida football team or his popular YouTube channel that showcased and monetized his athletic skills.