Former Syracuse QB Eric Dungey not giving up on his dreams 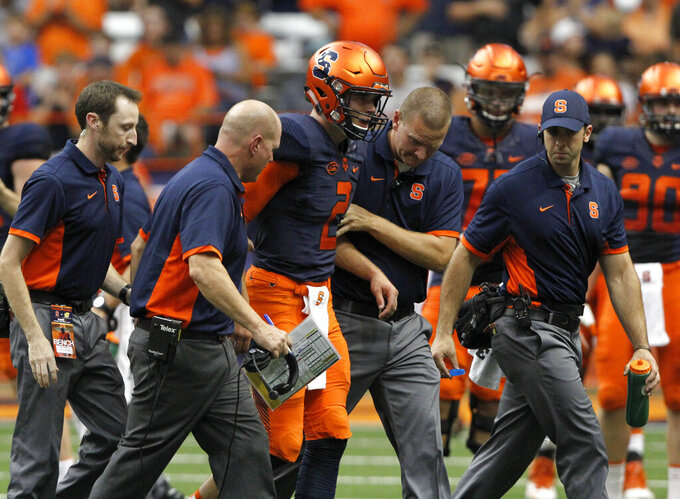 FILE - In this Sept. 19, 2015, file photo, Syracuse's Eric Dungey, center, is helped off the field after being injured by a helmet-to-helmet hit from Central Michigan defensive lineman Mitch Stanitzek on a play in the second quarter of an NCAA college football game in Syracuse, N.Y. The hit sidelined Dungey for three weeks. Dungey says the stigma of his injuries in college has hampered his chances of playing professionally. (AP Photo/Nick Lisi, File)

Former Syracuse quarterback Eric Dungey has been on an emotional ride that would test the mettle of most.

Not selected in the NFL draft despite a record-setting college career. Cut as a free agent by the Giants and Browns. Saying goodbye to his father, who lost his life to cancer just over a year ago. The demise of the XFL before he could take a snap, a victim of the global pandemic. Working part time in medical device sales to keep money coming in so he could train and stay in shape.

“It’s been a crazy journey," Dungey said. "I was very grateful going to the New York Giants right out of college. Unfortunately, it was a little different than what I expected.”

In spite of it all, Dungey hasn't given up on his dreams of playing pro ball and is hoping for another chance.

Drafted into The Spring League, an eight-team developmental circuit formed in 2017 to give players a place to showcase their talent, he was psyched for the season opener.

“It’s an opportunity and a great opportunity, and I’m excited," said Dungey, who was set to lead the Blues against the Sea Lions in Houston on Friday night before the Cincinnati Bengals offered an invitation for a minicamp tryout, putting that start on hold. "I just can’t wait to play some football finally after all this and everything I’ve been through.”

Dungey’s college credentials are impressive. He’s the all-time leader at Syracuse in career yards passing (9,340), is tied for sixth in career touchdowns (93) in the Atlantic Coast Conference with Russell Wilson, and also ranks sixth in ACC annals in career yardage (11,333).

And he accomplished that basically in three seasons when the 10 games he missed because of injuries are factored in. He also had two head coaches and four offensive coordinators and never was able to redshirt, getting thrown into the starting role as a freshman by coach Scott Shafer when senior starter Terrel Hunt was injured in the season opener and never returned.

“Not having a redshirt year was tough just because I basically came to campus in the summer, got about a month and a half or two months of camp in, and then I was thrown into a starting position and went from there,” said Dungey, who grew up in Oregon.

Listed at 6-foot-4 and 195 pounds when he first stepped on the Syracuse campus in 2015, Dungey added more than 30 pounds of muscle to morph into a bruising runner as a senior (754 yards and 15 touchdowns), sometimes leaving defensive backs dazed in his wake. And when he made a mistake, he usually tried to make amends, as he did against Miami when Demetrius Jackson intercepted a pass from Dungey that was tipped at the line and he was quickly hit by the Orange's determined quarterback, who ripped the ball out of Jackson's grasp to keep Syracuse's drive alive.

Even though he fits the mold of today’s NFL quarterback, all of those attributes faded into the background at NFL draft time, likely because of the hit. Dungey suffered a concussion on a cheap shot against Central Michigan in the third game of his freshman season, and other head-hunting hits that he absorbed the rest of his college career are a part of his résumé that he can't erase.

“My former agent would tell me just basically that they had concerns about my past in college," Dungey said. “He wouldn’t tell me specifics because they wouldn’t release too much, but apparently there was something about that.”

And he wants to put it in the rearview mirror once and for all.

“I’m healthy. That’s the biggest thing I’ve been trying to say. I’m ready to go," Dungey said. “I think there’s a bad stigma around me about the injuries. It was just kind of blown out of proportion, and it’s very frustrating, especially as a football player. If you have that stigma around you, teams won’t even touch you.”

The Spring League still awaits regardless of what happens with the Bengals, and Blues coach Ted Cottrell said there's still a spot.

“He was doing very well, and he got a call,” Cottrell said. “He’s got a strong arm. Good leader. We're wishing the best for him. The object of The Spring League is to afford guys the opportunity to get contracts with the NFL. Somebody must have liked the guy I chose in the draft. That’s the thing. You never know what’s going to happen. We'll do what's best for him."

Added Dungey: "You want people to believe in you and I’m very loyal to people that do, and I’ll give them everything I can.