Gator Bowl fill-in Rutgers 'letting it hang out' vs Wake 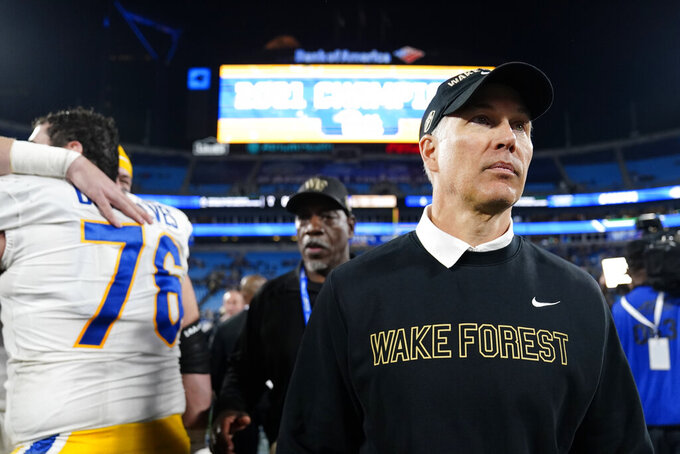 JACKSONVILLE, Fla. (AP) — Accepting a spot in the Gator Bowl was easy for Rutgers. Getting there proved much more daunting.

The Scarlet Knights, a late substitution for Texas A&M in Friday’s game against 20th-ranked Wake Forest, spent several days trying to land a charter flight for the trip and eventually needed two to get everyone to Jacksonville.

In the meantime, suggestions poured in: Take a train. Rent a cruise ship.

Even after the flight came together, players and a few coaches were forced to wait 2½ hours on a tarmac in Newark, New Jersey, to finally take off.

“Literally, when the wheels got off the ground, I said, ‘All right, this is official. We’re doing it,’” coach Greg Schiano recalled Thursday. “I promised these guys we’re coming down and we’re letting it hang out."

The Demon Deacons (10-3) have one of the nation’s most potent offenses. They average a school-record 41.9 points, which ranks second in the Atlantic Coast Conference and fifth in the nation.

Led by quarterback Sam Hartman and a dynamic receiving duo of Jaquarii Roberson and A.T. Perry, they have scored at least 21 points on every opponent this season – more than 40 eight times – and now face a Rutgers team that averages 20.5 a game.

“The explosiveness on every play is probably the biggest challenge to defend,” Hartman said.

That task became even tougher when the bowl game, usually a monthlong affair complete with three weeks of practices, became a quick turnaround.

Texas A&M pulled out because of a lack of available players due to injuries, opt-outs, transfers and COVID-19 issues. The NCAA gave Rutgers the first shot at filling the void because it had the highest Academic Progress Rate score of all the country’s 5-7 teams.

Schiano hastily gathered his players from Christmas break and held two practices in a heated bubble before heading south. They got in two more in nearby Ponte Vedra Beach this week.

“We didn’t win enough games to be bowl-eligible,” Schiano said. “We own that. But what we need to know is the work they did in the classroom is what allowed them to be first up when an opportunity opened. I tell them all the time, ‘There are no coincidences.’ You reap what you sow.”

This is Rutgers’ first bowl appearance since 2014.

Wake Forest, meanwhile, is trying to win 11 games for just the second time in the program’s 114-year history. It would help the Demon Deacons reach their 2021 goal of “going from good to great."

“It was a really aggressive motto," linebacker Luke Masterson said. "It wasn’t something that we had done in the past. I think when we put that out there, and the whole ACC looked at that, and if we didn’t accomplish going from good to great, we would have looked pretty stupid.”

Rutgers punter Adam Korsak traveled the farthest to get to the bowl game. The Aussie had arrived back home in Sydney when he got through customs, turned on his cellphone and started getting blown up with texts urging him to “come back, come back.”

He booked a flight back to the United States, was forced to quarantine for three days and show proof of two negative COVID-19 tests taken a day apart before heading to Jacksonville.

“It’s a lot of flying, but obviously it’s worth it," said Korsak, a finalist for the Ray Guy Award.

A bonus for Korsak: Rutgers is staying at the Sawgrass Marriott, home of The Players Championship. He's a huge golf fan and got to walk the famed 17th island green.

“I’m still buzzed from that," he said.

Schiano and Wake Forest's Dave Clawson formed a friendship decades ago and remain close enough that they call each other during the offseason for advice.

Longtime coaches born a year apart and growing up in the Northeast, Clawson asked Schiano to do an assessment of every aspect of Wake Forest in 2014, the year after Schiano was fired by the NFL's Tampa Bay Buccaneers.

“I think we're both grinders,” Clawson said. “I think he's one of the best coaches in all of college football. He's one of the smartest, brightest coaches I've ever met, and I just have a ton of respect for him."

Hartman is known for his hair, his dark brown locks that often seem in perfect place even when peeking out from under his helmet. When asked how his long locks were holding up in the Florida humidity, he responded: