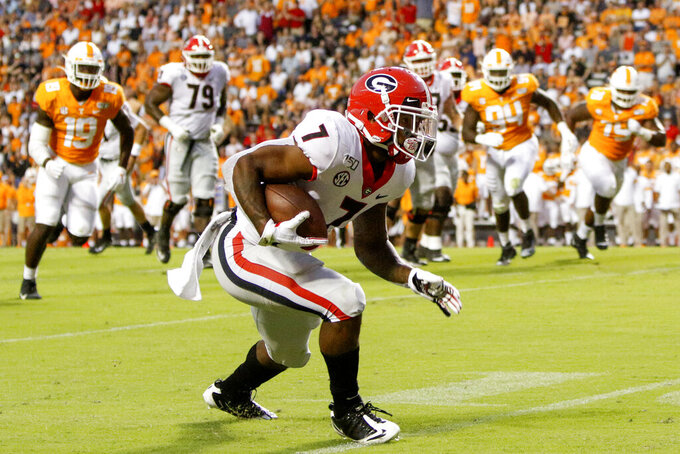 Georgia running back D'Andre Swift (7) turns up field after making a catch against Tennessee at Neyland Stadium on Saturday, Oct. 5, 2019 in Knoxville, Tenn.(C.B. Schmelter/Chattanooga Times Free Press via AP)

ATHENS, Ga. (AP) — A Georgia offense averaging almost 43 points per game shouldn't have to make apologies if it doesn't have as many big-play passing highlights as some teams.

The No. 3 Bulldogs (5-0, 2-0 Southeastern Conference), who play South Carolina (2-3, 1-2) on Saturday, are happy to keep leaning on another deep and productive running game — as long as that means they keep winning.

Senior Brian Herrien, who led the Bulldogs with 88 yards rushing and a touchdown in last week's runaway 43-14 win at Tennessee, says it's important for Georgia to maintain bragging rights atop the league's rushing leaders.

"It means a lot," Herrien said Monday, adding "our running game and our offensive line" are traditional points of pride for the Bulldogs.

"We really like to protect our running game as the best in the SEC," Herrien said. "We call ourself RBU and so we really want to protect that."

There is good basis to the RBU claim.

Three former Georgia running backs — Chubb, Todd Gurley and Michel — rank among the NFL's top 20 rushers this season. Swift, a junior, is rated among the top running backs eligible to be taken in the 2020 NFL draft.

Another deep group of backs led by Swift, Herrien, Zamir White, Kenny McIntosh and James Cook has flourished behind a powerful offensive line led by left tackle Andrew Thomas. Each of the five tailbacks has run for at least one touchdown.

The Bulldogs lead the SEC with 250 yards on the ground per game this year.

That's why receiver Tyler Simmons knows there's no reason to expect a sudden surge of deep passes from Jake Fromm.

The league's top ground game and efficient play from Fromm, who has not thrown an interception, make Georgia difficult to beat under coach Kirby Smart. Georgia is 30-2 when running for at least 200 yards in Smart's four seasons. This is Georgia's third straight 5-0 start.

The strong running game has helped Georgia wear down opponents. The Bulldogs had to rally from first-half deficits in their last two wins over Notre Dame and Tennessee. In each game, Georgia wore down its opponents with its relentless ground game.

South Carolina coach Will Muschamp said Georgia is "extremely talented at running back." He said Fromm "is very accurate with the football and takes it to the right spots."

Herrien has run for 251 yards and is tied for the team lead with four touchdowns.

"The Brian that I'm seeing now is the Brian I've always seen," Smart said. "... You say, why didn't he play? The guys that are in the NFL are the reason he didn't play."

"I don't think you look for greener pastures at Georgia," Smart said. "You continue to work and get better because the green pasture is what the O-line opens up."