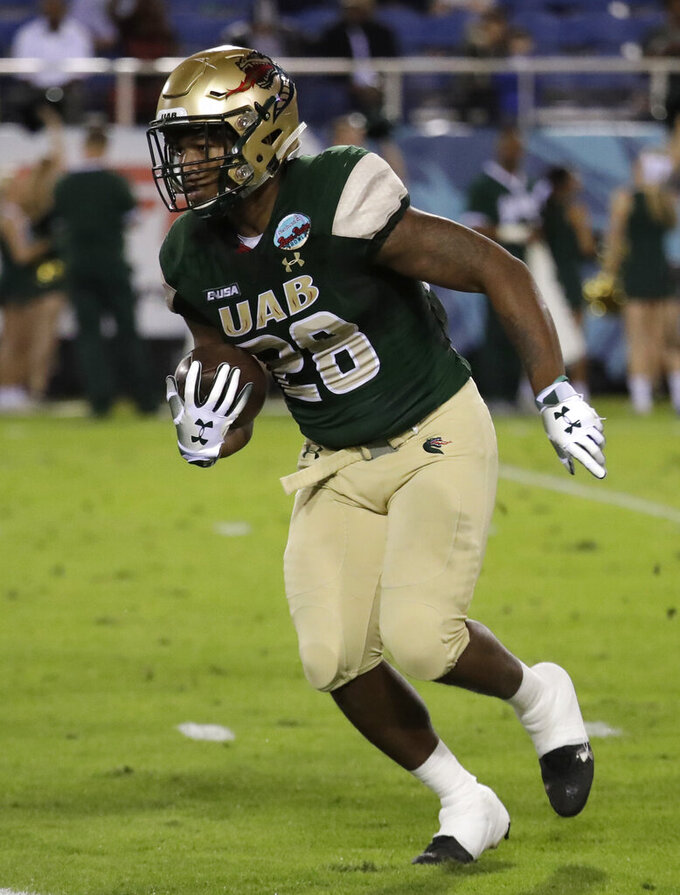 FILE - In this Dec. 18, 2018, file photo, UAB running back Spencer Brown (28) carries during the first half of the Boca Raton Bowl NCAA college football game against Northern Illinois in Boca Raton, Fla. Brown has had consecutive 1,200-yard seasons. He ran for 1,227 yards (87.6 per game) with 16 TDs last year. (AP Photo/Lynne Sladky, File)

DENTON, Texas (AP) — North Texas was oh-so-close in Conference USA last year to fulfilling the preseason prediction of repeating as a division champion. The Mean Green could have also ended up at the opposite end of the standings after five of their league games were decided by a field goal or less.

Going into Littrell's fourth season, and with two-time C-USA offensive player of the year quarterback Mason Fine one of nine starters back on the league's highest-scoring offense, the Mean Green are again favored in the West Division.

"I think the biggest thing we've learned throughout those games is maybe being able to overcome adversity a little bit better than we did this past year," said Littrell, whose team has had consecutive nine-win seasons. "Maybe just being a little bit more mentally tough this upcoming season will help us."

UNT's three C-USA losses were by a combined 13 points, including 29-21 to division foe and overall league champion UAB. In the Mean Green's other two league losses, they had a field goal attempt blocked in the final minute of a 29-27 home loss to Louisiana Tech, and blew a 28-0 lead in the first half of a 34-31 loss at Old Dominion.

The Mean Green were among six C-USA teams that went to bowl games, though Fine was injured early in the New Mexico Bowl. They ended up using three other quarterbacks in a 52-13 loss to Utah State, but the league still went 4-2 in bowl games, the best postseason winning percentage by any conference last season.

"The last couple of years, it's been a tough league," Southern Miss coach Jay Hopson said. "There's a lot of parity, there's a lot of winning. ... Top to bottom, a lot of teams are winning football games, so each week is a battle."

East Division: Marshall goes into coach Doc Holliday's 10th season as the favorite in the East Division. The Thundering Herd won four of their final five games last season, including a seventh consecutive bowl victory. They return quarterback Isaiah Green after a standout freshman season, along with their top two running backs. FIU, going into its third season under Butch Davis, has back quarterback James Morgan (26 TD passes) after a program-best nine wins last year. Florida Atlantic will be looking to rebound, having stumbled to 5-7 after a 10-game winning streak wrapped up Lane Kiffin's first season in 2017.

West Division: North Texas got 20 of 26 votes as the West favorite in the preseason media poll. Southern Miss, which returns 10 offensive starters, got four votes. Defending champion UAB has to replace seven offensive starters and six on defense.

SOME OTHER TOP PLAYERS

There will be 20 games with C-USA vs. Power Five teams, including three season openers Aug. 31 — FAU at Ohio State, Louisiana Tech at Texas and the MTSU-Michigan matchup.

Rice plays two such games, neither as a road team: against Texas at the home of the NFL's Houston Texans on Sept. 14, then at home against Baylor the following week. Southern Miss plays two SEC teams on the road, Mississippi State and Alabama.

There will be Conference USA games on the NFL Network for 10 Saturday afternoons this season, the first of a four-year deal that was the network's first agreement with a college league. All the C-USA games broadcast by the NFL Network will start at 3:30 p.m. Eastern on Saturdays, and 11 of the league's 14 teams will be featured in those games. The first will be Louisiana Tech hosting Grambling on Sept. 7, and the last will be Southern Miss at FAU on Nov. 30.