Hall is catalyst for Iowa State's 48-14 romp over TCU 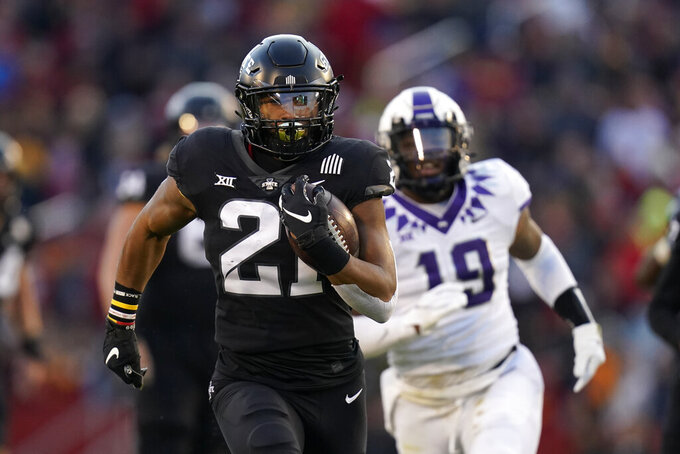 Hall darted 39 yards for a score in the second quarter, giving him 24 consecutive games with at least one rushing touchdown. He shared the record with Bill Burnett, who scored a rushing TD in 23 straight games for Arkansas (1968-70).

Hall, a junior who could be a high pick in next spring's NFL draft, is the Cyclones all-time career scoring leader with 336 points and 56 touchdowns.

Hall highlighted his dominance against TCU with an 80-yard touchdown run in the third quarter Friday, putting Iowa State (7-5, 5-4 Big 12) ahead 34-7.

His fourth touchdown came on a 4-yard run in the fourth quarter. Hall carried the ball 18 times (averaging 13.4 yards per rush) and caught two passes for 39 yards and a touchdown.

Afterward, Hall describe the night as a fairytale.

“It just really showed the hard work, myself and my team, put in,” Hall said.

Campbell shed a few tears during a pregame tribute for 23 seniors, and that emotion seemed to help Iowa State jump to an early lead.

After driving for a field goal on the game's opening possession, the Cyclones went up 10-0 when Jirehl Brock ran 40 yards for a touchdown.

Hall's record-setting touchdown extended the margin to 17-0 with 3:35 left in the second quarter.

TCU pulled within 17-7 at halftime on Max Duggan's 47-yard touchdown pass to Blair Conwright with 1:33 left before the break.

Hall's second touchdown came on a 22-yard pass from Brock Purdy early in the third quarter, giving the Cyclones a 24-7 advantage.

Purdy finished 21-of-30 passing for 262 yards and two touchdowns.

Iowa State's special teams set up that score with a blocked punt.

TCU: Jerry Kill's time as the Horned Frogs interim coach, following the departure of Gary Patterson, has opened the possibility that he might want to continue as a head coach. Kill posted a 29-29 record at Minnesota from 2011-15, before stepping down for health reasons. He's been mentioned as a candidate at New Mexico State.

Iowa State: Cyclones defensive end Will McDonald set a school record in the third quarter Saturday when he was credited with a sack, giving him 11.5 on the season. McDonald set the previous mark of 10.5 last season.

Iowa State began the season ranked No. 7, but fell out of the top 25 after a 2-2 start. The Cyclones briefly reappeared at No. 22 after beating Oklahoma State. They'll need a win in their bowl game in order to have any chance of climbing back into the rankings.

TCU: Is Sonny Dykes the Horned Frogs' next coach? Several media sources have tabbed Dykes as the man to replace Gary Patterson, the winningest coach in school history, who was dismissed midseason.

Iowa State: The Cyclones wait to find out their bowl destination. Multiple projections have them in the Texas Bowl, played in Houston.