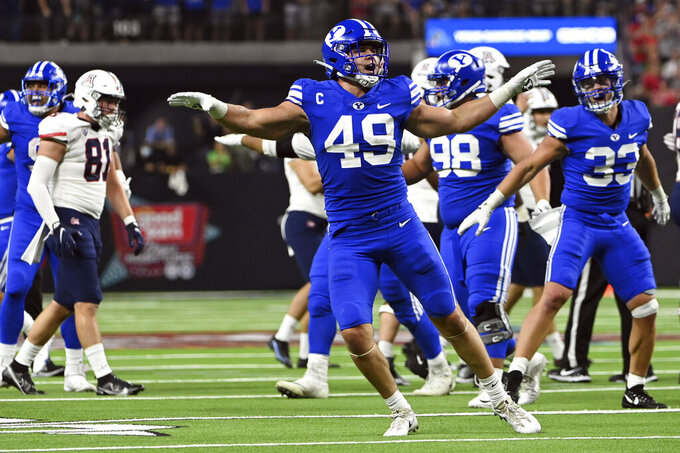 BYU linebacker Payton Wilgar (49) reacts after a missed field goal by Arizona during the second half of an NCAA college football game Saturday, Sept. 4, 2021, in Las Vegas. (AP Photo/David Becker)

His successor got off to a good start.

Quarterback Jaren Hall accumulated 243 yards and two touchdowns as BYU defeated Arizona 24-16 at Allegiant Stadium on Saturday night in the season opener for both teams.

Hall, the redshirt sophomore from Spanish Fork, Utah, made his third career start and first in the post-Wilson era. Wilson, drafted No. 2 overall by the New York Jets in this year’s NFL Draft, was in Las Vegas to see the Cougars play in an NFL stadium.

“Zach being here, supporting the guys he played with for three years, means a lot to us to have him and brings confidence to everybody for what he’s done in the past,” Hall said. “It was good to have him.”

After a scoreless first quarter, BYU’s signal caller lit a spark. Hall caught a 9-yard pass from receiver Neil Pau’u to put the Cougars into the red zone. Tyler Allgeier ran into the end zone from 15 yards out on the next play to give BYU a 6-0 lead with 9:17 left in the second quarter.

“I think it was just a clean football game overall for the offense,” Hall said. “I thought we executed well. Just kind of took the plays in front of us when they came, the opportunities the defense gave us.”

That drive sparked BYU’s offense in the second quarter. On the Cougars’ next drive following a missed 31-yard field goal from Arizona, Hall found Pau’u in single coverage down the middle for a 67-yard touchdown. A two-point conversion made it 14-0 with 2:06 left in the first half.

Pau’u caught eight passes for 126 yards and both of Hall’s touchdown passes. The second came three plays after Hall spun in the pocket, found a lane and ran 39 yards down the left sideline to the Arizona 17-yard line.

“I thought he made some plays,” BYU coach Kalani Sitake said. “He broke a long one for that scramble, created some space for himself. I liked the composure, the poise he had. He’s a great leader for us.”

Arizona trailed 21-3 at that point with 7:28 left in the third quarter.

Playing in their first nonconference game in 721 days, the Wildcats lost their 13th consecutive game dating back to 2019. It was also the debut for Wildcats coach Jedd Fisch, the former quarterbacks coach for the New England Patriots. Fisch replaced Kevin Sumlin, who went 0-5 in 2020.

“Disappointing that we did not finish that game off,” Fisch said. “Hats off to BYU. They battled. They came out strong, came out physical. It was a good game right off the bat, all the way through.”

Gunner Cruz was 34-for-45 passing for 336 yards with a touchdown and an interception as the Arizona starter. Cruz split time with Will Plummer, who amassed only nine yards passing on three attempts before Cruz finished the game.

“We came out and wanted to win the game, and I think we had a great game plan going in,” Cruz said. “Some things didn’t go our way.”

BYU: Even as the designated road team, the BYU contingent traveled well to Allegiant Stadium. The Cougars benefited greatly from a heavy blue-clad crowd after a slow start in the first quarter, when they had just 69 yards of offense.

Arizona: Despite going 2 for 2 on fourth down in the first half, the Wildcats only mustered three points. Lucas Havrisik missed two of three field goals, a 31-yard attempt in the second quarter and a 44-yarder in the third.

Facing a BYU team that averaged 522.2 yards per game last season, Arizona held BYU to 368 yards and gave the offense plenty of chances. The Wildcats got a safety with 3:12 remaining, and Arizona answered with a three-play drive that ended in a 29-yard touchdown pass to BJ Casteel, cutting the lead to 21-13. “I love our guys,” Fisch said. “They could not be more excited about practice on Monday; could not be more excited for the opportunity to get back out there.”

Cruz played a smart, solid game throughout most of the night. His biggest mistake was a matter of forcing the play. At the BYU 35, Cruz threw into double coverage to the end zone, and Hayden Livingston secured the interception for the touchback. “There was a misread in coverage,” Fisch said. “The backside safety rolled over the top and went post-high.”

Cornerback Keenan Ellis was carted off the field after sustaining an apparent head injury with 10:15 remaining in the first quarter. Ellis made a play on Arizona receiver Michael Wiley on third-and-5 when his head collided against Wiley’s back. Ellis, a junior, was transported to University Medical Center -- Las Vegas’ only Level I trauma center since 1992 -- for further evaluation.

BYU plays at home against rival and 24th-ranked Utah.