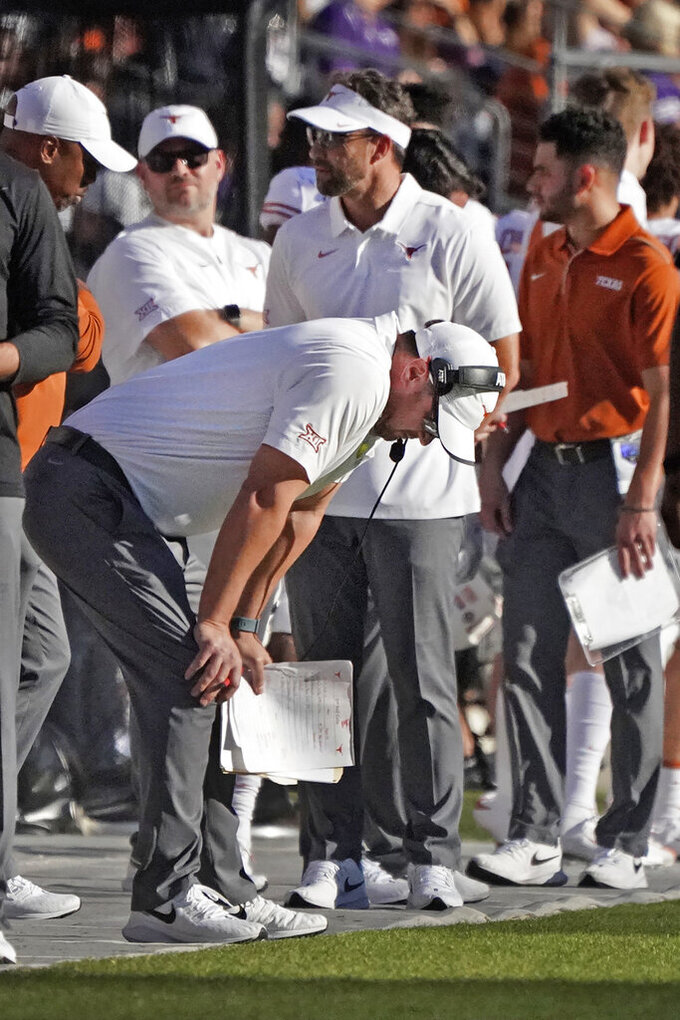 FILE - In this Oct. 26, 2019, file photo, Texas head coach Tom Herman looks down on the sidelines in the second half of an NCAA college football game against TCU, in Fort Worth, Texas. Texas goes into its regular season finale against Texas Tech trying to avoid a 6-6 record. While he’s not going to get fired, this is clearly a step back for the Longhorns in Herman’s third season following three consecutive losing seasons under Charlie Strong. (AP Photo/Louis DeLuca, File)

AUSTIN, Texas (AP) — Texas coach Tom Herman shook up his staff Sunday, firing defensive coordinator Todd Orlando and demoting offensive coordinator Tim Beck after the Longhorns struggled to a disappointing 7-5 record in a season they were expected to contend for the Big 12 championship.

The Longhorns began the season ranked in the Top 10 but are now unranked as they await their bowl destination after losing three of their last five games.

Beck will stay on as quarterbacks coach through the bowl game, but his status beyond that was unclear.

Herman said he was “very disappointed” in the season and said that 7-5 “will never be our standard at Texas.”

“I take full responsibility for any and all of our shortcomings and know we need to do a better job coaching across the board,” Herman said. “With that said, I do believe the future is very bright.”

Staff changes were expected. Herman said last week the program was in “full evaluation” mode and signaled several assistants could be let go.

“These were very difficult decisions and certainly not an indictment of them as coaches,” Herman said. “I just believe we need a fresh set of eyes and infusion of new ideas and energy to help us grow across the board.”

Much was expected of Texas this season after a 10-4 finish in 2018 that included a dominant victory over Georgia in the Sugar Bowl.

Texas started 4-1 with its only defeat a 42-38 home loss to No. 1 LSU. But the defense struggled early and was badly exposed against LSU and in losses to Oklahoma and TCU. The Longhorns also barely escaped a major upset with a 50-48 win over Kansas.

The defense improved late in the season, but the unit still ranked among the worst in the country and routinely gave up big plays in late-game situations.

That was the reverse of what happened with the offense. The Longhorns ranked among the best offenses in the country over the first seven games, but didn’t score more than 27 points over a four-game stretch that killed Texas’ Big 12 title hopes.

Orlando came with Herman from the University of Houston in 2016 and was one of the highest-paid assistant coaches in the country. He still has another year on a guaranteed contract that pays him more than $1.7 million annually.

Co-defensive coordinator and safeties coach Craig Naviar will be the interim coordinator.