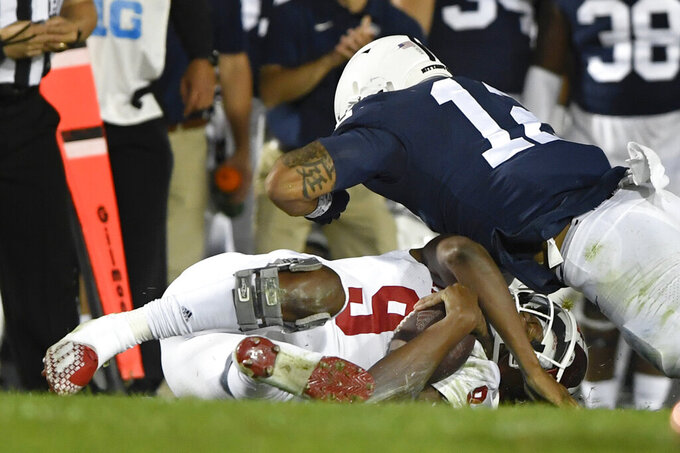 Coach Tom Allen said Monday that the redshirt junior suffered a separated throwing shoulder during Saturday's loss at Penn State. He is out indefinitely and is being listed as week to week.

Jack Tuttle, who replaced Penix for the final two games last season, is expected to take over when the Hoosiers return to action Oct. 16 against No. 11 Michigan State. The Hoosiers (2-3, 0-2 Big Ten) have a bye this week.

“I don’t know that you can rule that out at this point," Allen said when asked if Penix would need surgery. “There are some unknowns with the rehab process, surgery is definitely not felt to be necessary at this time. At the same time, we don’t know all those answers at this point."

The injury occurred when Penn State linebacker Brandon Smith drove Penix into the ground during the third quarter.

Since returning from a torn anterior cruciate ligament in his right knee, which ended his 2020 season, Penix was completing just 53.7% of his throws and had thrown seven interceptions and four TD passes. He threw three interceptions in each of Indiana's first two losses, with two returned for touchdowns.

Though he showed improvement in a victory at Western Kentucky he had more trouble against Penn State. He went 10 of 22 with 118 yards and one interception before leaving Saturday as Indiana endured its first shutout since 2000.

“The (overall) performance was unacceptable, not up to our standard and we have to get it fixed," Allen said. “It's execution, it’s play-making, it's finding ways to get out of a bad call and into a better call. At the end of the day, that’s my responsibility. So we've got to make sure the way we performed Saturday night never happens again."

Tuttle went 6 of 12 with 77 yards and also threw an interception.

It's not the first time Tuttle has been in this position, either. He closed out a win over Maryland last season and went 1-1 after becoming the starter, losing to Ole Miss in the Outback Bowl while playing most of the game with a separated throwing shoulder.

“I mentioned in the preseason we felt like we had two starting quarterbacks and on this team," Allen said. “He’s highly respected by his teammates and he brings an energy as well. I thought he gave us a spark even Saturday. I have great confidence in him and he has a great quality to always be ready to play whether it's no snaps, one snap or 80 snaps."

Allen also hopes the bye will help Indiana get some key defensive starters including cornerbacks Tiawan Mullen and Reese Taylor and starting safety Raheem Layne, back from injuries, too.

NOTES: Indiana's running back depth is taking another hit after backup Tim Baldwin decided to enter the transfer portal. Allen said Baldwin is no longer with the team. Baldwin is the second running back who has opted to transfer this season. Sampson James, another backup, decided to play at Purdue in August.