Huskers looking to continue rise after strong finish in 2018 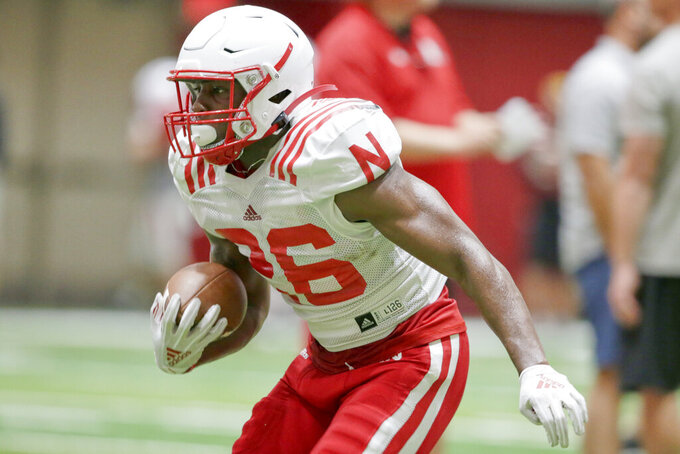 In this photo taken Aug. 7, 2019, Nebraska running back Dedrick Mills (26) carries the ball during NCAA college football preseason practice in Lincoln, Neb. Immediate contributions are expected from Mills, who as a freshman in 2016 led Georgia Tech with 771 yards and 12 touchdowns in nine games. (AP Photo/Nati Harnik)

LINCOLN, Neb. (AP) — Scott Frost's first Nebraska team started 0-6 and finished 4-8, the same record as in 2017 under Mike Riley. Wins in four of the last six, though, created an entirely different vibe about where the program is heading.

"Everybody can tell that we turned it around toward the end of the season, and that's just a building block of what we want to do and want to accomplish this season," linebacker Alex Davis said. "We saw what we could do and we're just building off of that. I don't think people have seen what we are capable of yet."

The return of quarterback Adrian Martinez, a defense expected to be better and a favorable schedule have led to predictions of the Huskers improving to 8-4 or better and winning a wide-open Big Ten West.

"I think finishing the way we did helped guys believe in our process for getting things done more than anything," Frost said. "Toward the end of the year I think they got that. We won our share of games, and even the ones we lost — Northwestern, Ohio State, Iowa — we had chances. So I think our guys are going into this season knowing that we are a better team today than we were then and hoping that the progress we've made is enough to get us over the top in some of those games."

Martinez, the most productive freshman quarterback in the nation last season, averaged 371 yards of total offense against division opponents and a school-record 295 per game overall. He led an offense that ranked second in the Big Ten and scored 30 points per game.

Martinez lost top receiver Stanley Morgan Jr. but has back JD Spielman, tight end Jack Stoll and a stable of running backs that could develop into one of the best in the conference if Maurice Washington is allowed to play. Washington faces charges in California for texting a pornographic video to a former girlfriend.

The bigger question is defense.

Erik Chinander's unit was 12th out of 14 Big Ten teams in total defense and scoring defense but should be better in the second year of his 3-4 system.

"I want this team to prove that it can be tough," Frost said. "We have some tough guys on the team, for sure. We have some other guys that I think are going to be tough. We have some young guys that still have to prove it. To win in this league you have to be tough and you have to be physical. I think our talent level, our speed, our strength, all those things are going to be considerably better this year, but it doesn't matter if you don't go hit somebody in the face on the field."

Immediate contributions are expected from running back Dedrick Mills, who as a freshman in 2016 led Georgia Tech with 771 yards and 12 touchdowns in nine games. He was kicked out of Tech for failing multiple drug tests, according to the Atlanta Journal Constitution, and spent the last two years at Garden City (Kan.) Community College. A broken collarbone limited him to two games in 2017, but he went for 1,358 yards and 19 TDs in 10 games last season.

The loss of Morgan, the school's all-time receiving leader, will give more spotlight to Spielman, whose 1,648 yards in 21 career games ranks third nationally among non-seniors. Also watch Kanawai Noa, a graduate transfer from California.

THE BOYS UP FRONT

"We have more 'trustable' bodies is the best way to say it," line coach Greg Austin said. "More guys you can trust that know what they're doing, know what the expectation is."

The Huskers open Aug. 31 at home against South Alabama and then play at old Big Eight/12 rival Colorado, which erased a late eight-point deficit to win in Lincoln last year. Nebraska gets most of its toughest Big Ten games at home — Ohio State, Northwestern, Wisconsin and Iowa.