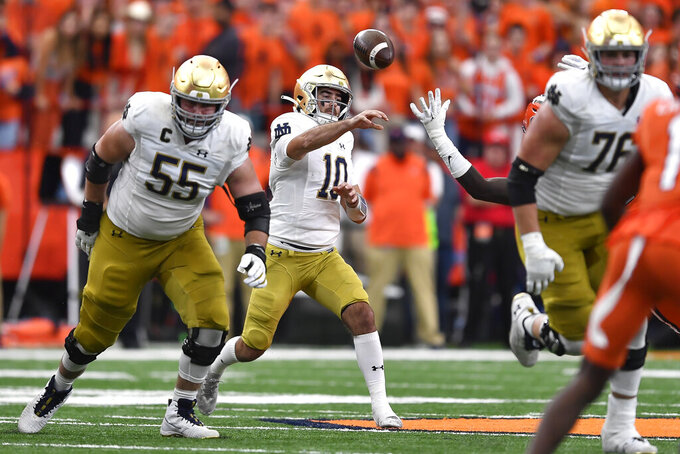 SOUTH BEND, Ind. (AP) — Notre Dame turned its season around by leaning on its ground game. Now the Fighting Irish are about to find out if they can keep grinding it out when they face one of the nation's top run defenses.

After losing its first two games and starting quarterback to a season-ending shoulder injury, Notre Dame redoubled its effort on the run, and while it's worked so far the biggest test comes Saturday at home against No. 5 Clemson.

“It’s going to be a big challenge,” first-year coach Marcus Freeman said. “Our offensive line is playing at a high level, and they're getting better. But let’s measure ourselves against the best.”

Since quarterback Tyler Buchner was injured against Marshall, Notre Dame (5-3) has developed a stronger supporting cast for Drew Pyne. The Irish have rushed for 216.2 yards per game behind a vastly improved line and in October, against four run defenses ranked in the bottom 60, they were No. 20 in rushing in the Bowl Subdivision.

But the Clemson run defense has been almost immovable. The Tigers allow 2.98 yards per carry and 87.9 yards per game, seventh fewest in the nation. Seven of Clemson's opponents have gained 125 yards or fewer on the ground, four limited to less than 75.

“They could walk in the room, and you’d look at them and think ‘That’s a first-round pick.’” Notre Dame offensive coordinator Tommy Rees said of the Clemson defensive front.

The Tigers (8-0, No. 4 CFP) thrive on creating havoc in the backfield. They're ranked seventh nationally in tackles for loss (8.2 per game), led by Myles Murphy with nine TFLs. He's followed closely by Tyler Davis (7.0) and K.J. Henry (6.5), and nearly another two dozen defenders including 300-pound tackle Bryan Bresee, have at least one.

But the Irish may be better equipped to avoid a repeat of those first two stagnant performances against top-10 run defenses as sophomores Audric Estimé and Logan Diggs have emerged.

The 5-foot-11, 229-pound Estimé has given Notre Dame a strong, physical presence on the ground and it's showed. He leads the team with 558 yards rushing, 624 scrimmage yards and eight TDs. And his playing time was reduced against Stanford and UNLV because of lost fumbles, but he got back on track last week in a win at then-No. 16 Syracuse with a 123-yard, two-TD game.

“It’s really important as a coach to make sure your players really know you believe in them,” Freeman said. “That’s the one thing that never wavered with Audric, the belief in him being productive and the things he can do."

Diggs was limited early this season because of a torn labrum he suffered in the annual spring game. He did not play against California because of an illness but logged 91.3 yards per game in October and now has 431 yards rushing. Speedy junior Chris Tyree gives Notre Dame a different look with 418 yards from scrimmage and three scores.

On Saturday, the trio needs Pyne to help keep Clemson's defense honest. And if the Tigers have a weakness, it's defending the pass. They allow 244.6 passing yards per game.

The problem: Notre Dame used the running game on nearly three-fourths of its plays in last week's win at Syracuse and they'll need Pyne to be more effective,. He's completed just 49% of his throws the last three weeks with three TDs and three interceptions.

While Rees is confident Pyne can get the job done through the air, Freeman acknowledged Pyne needs to be more accurate this week to give the Irish and their runners a chance to pull the upset.

“It’s a great football team that’s coming into Notre Dame Stadium,” Freeman said. “Our team will be ready to roll.”