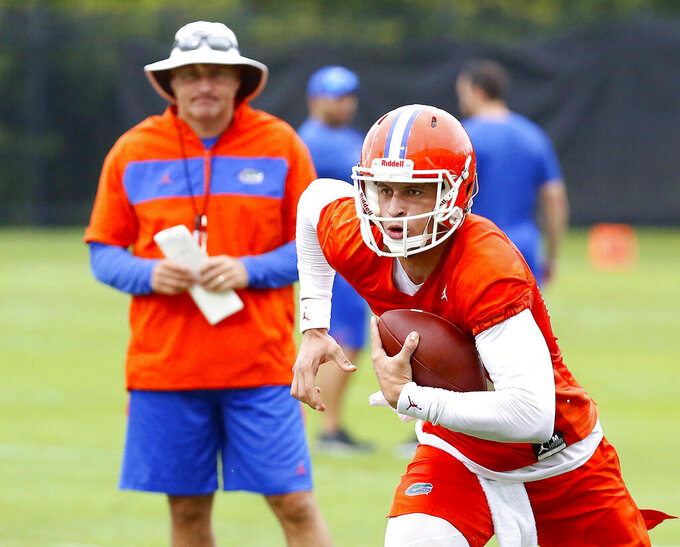 Franks and his four housemates, including a pair of 300-pound offensive linemen, organized "a little wrassling" in their pool. The rules were simple: First to get pushed, pulled, dragged or carried into the deep end and then fully submerged loses.

Franks more than held his own in the friendly competitions, showing toughness and tenacity. Florida is counting on the same from its starting quarterback this season.

And if Franks is good, the Gators could be great.

The 6-foot-6, 230-pound junior from Crawfordville is the ultimate X-factor in Gainesville. It's an odd dynamic considering he's a two-year starter and played the best football of his career down the stretch in 2018. But it's a reality for the Gators in coach Dan Mullen's second season.

"The biggest thing for him is consistency," said Mullen, whose team finished 10-3 in 2018. "He has a much better grasp of the offense. But just his constant, his leadership.

"Is he making everyone around him better? Not just by the plays that he makes, just his presence, how he talks to guys, how he leads them between series, all those things. That's the constant things that we work on."

It wasn't that long ago that Franks was on the verge of getting benched for the fifth time in less than two seasons. He was vilified by fans, openly questioned by two different head coaches and mistrusted by teammates.

Self-doubt was a problem, too.

But his play late last season seemed to silence critics and solidify his starting spot. After shushing the home crowd during a victory against South Carolina in November, Franks was responsible for 11 touchdowns and no interceptions over the final 13 quarters of the season. He finished the season with 24 touchdown passes, seven rushing scores and six interceptions — the best numbers any Florida QB has posted since 2007 Heisman Trophy winner Tim Tebow graduated more than a decade ago.

Franks showed signs of progress and became an effective runner in Mullen's spread-option offense. But can he take the next step — improving his leadership and his accuracy? His performance in those pool bouts proved he's up for a challenge.

"It doesn't matter to me what people think, but I think I'm one of the best," Franks said. "That's just me having confidence in myself. At the end of the day, my performance on the field is going to tell. . Only time can tell."

Here are some other things to know about Florida, which begins the season Aug. 24 against in-state rival Miami in Orlando:

The Gators have their most talent in nearly a decade. Running back Lamical Perine averaged 6.2 yards a carry in 2018 behind a shaky offensive line. Receivers Kadarius Toney, Van Jefferson and Trevon Grimes are experienced playmakers. Pass-rushers Jabari Zuniga, Adam Shuler and Jonathan Greenard should provide plenty of pressure on opposing quarterbacks. And C.J. Henderson, Marco Wilson and Trey Dean are arguably the best cornerback trio in the Southeastern Conference, maybe even the country.

The Gators open against the Hurricanes, who have won seven of the last eight in the once-heated series. They also have road games against Kentucky, LSU, South Carolina and Missouri, home games against Auburn and Florida State, and a daunting test against rival Georgia in Jacksonville. The Bulldogs have won two straight in the series, outscoring Florida 78-24 and proving to be the team to beat in the SEC's Eastern Division.

Florida is replacing four starters on its offensive line, making it the main position of concern heading into the season.

Last year's unit, which had three guys selected in the NFL draft, helped produce the 10th-best rushing offense in school history. The Gators average 213.2 yards a game on the ground and allowed 18 sacks, which ranked 20th in the Football Bowl Subdivision.

"The biggest thing with all these guys is just confidence in themselves," line coach John Hevesy said.