Iowa State out to earn rare win at Kansas State 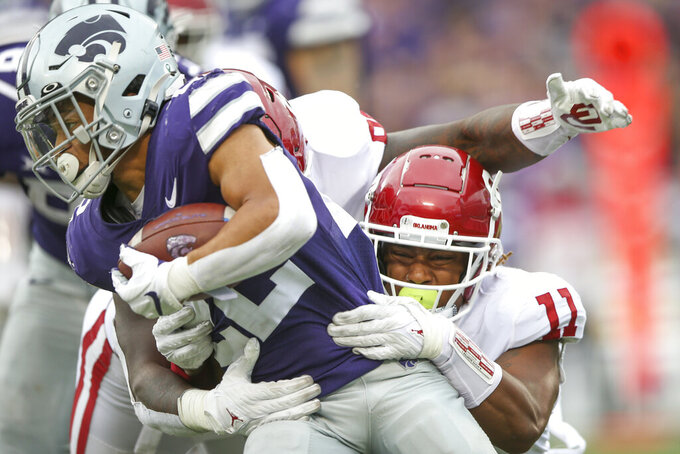 MANHATTAN, Kan. (AP) — Iowa State has had varying levels of success against everybody in the Big 12 over the years, whether it's been upset wins over heavyweights such as Oklahoma and Texas or regular victories over schools such as Kansas.

One place the Cyclones haven't had any success: Kansas State.

Even though the two programs are closely tied together, given the land-grant schools' similar profiles, Iowa State has not beaten the Wildcats on the road in 17 years. That not only predates Cyclones coach Matt Campbell and Chris Klieman, his current counterpart, but it dates all the way back to the first tenure of Bill Snyder in Manhattan.

“Football is really important there. We know,” said Campbell, who is 0-2 in his trips to Kansas State. “I don't know if I can say enough about Coach Snyder in terms of what he built there and how important he built college football in Manhattan. And you know, Coach (Klieman) has done a phenomenal job of carrying that tradition and pride on.”

It would be a better place to win.

The Cyclones had high expectations this season, but close losses to Iowa and Baylor put a damper on things early. But they hope a 59-7 rout of the Jayhawks their last time out can jumpstart the rest of the season, especially given Iowa State has a track record under Campbell of playing their best late in the year.

“They're two teams that know each other really well,” Klieman said, “and we spend an awful lot of time in the offseason self-scouting them. They're a good staff. They probably scout a little bit of everybody. But I think when teams know each other pretty well and have playmakers that make plays, you get competitive games.”

Like the Cyclones, the Wildcats had last week off. And it couldn't have come at a better time for a team that has been beset by injuries, including the knee injury to quarterback Skylar Thompson that hindered his mobility even when he returned.

“I'm getting better every day, truly,” he said. “The more that I get around and move around, the more confidence I'm building in it. Having a week off to still practice and build that confidence has helped a lot.”

“Equally to his vision, his balance is really good. You see him breaking tackles a lot and being able to bounce off the first tackler and make real positive things happen,” Campbell said. “So a lot of respect for him, certainly really talented.”

Vaughn isn't the only standout playing Saturday. The Cyclones feature All-American running back Breece Hall, who led major college football in rushing last season, and who happened to play his high school ball in Wichita, Kansas.

“The top challenge is probably their backfield really,” Wildcats defensive end Spencer Trussell said. “They have (quarterback) Brock Purdy and Breece Hall and a handful of very talented tight ends.”

MORE ON THE QBS

Thompson threw for 320 yards against the Sooners despite his ailing knee, and it was clear that his return jump-started a Kansas State offense that stagnated during his injury. Purdy threw for 240 yards with four touchdown passes and no interceptions his last time out against the Jayhawks.

The Cyclones lead the Big 12 in scoring defense (14.2 point allowed per game) and total defense while ranking second in pass defense, and they should give Thompson and Co. everything they can handle on Saturday night. Three of their first five opponents have been held to 10 points or fewer with Baylor and Iowa the exceptions.

OH, AND ABOUT LAST YEAR

Don't think the Wildcats have forgotten about the 45-0 drubbing they experienced at Jack Trice Stadium last season.

“We discussed it a little bit on Thursday before we left for a little bit of a break," Klieman acknowledged. "It’s a new season, new group of guys, and I know a lot of guys were at that game, but there’s a number of guys that weren’t, whether they were on the roster or were injured. So, try not to put too much into what has gone on in the past. You better focus on the future, and I know our guys are excited about the opportunity.”