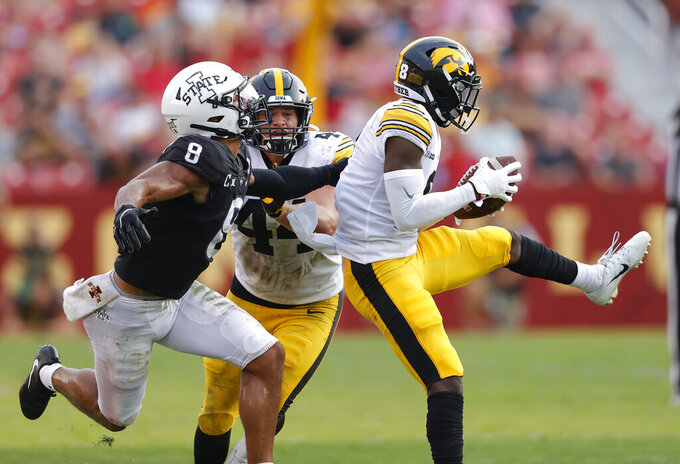 FILE - Iowa defensive back Matt Hankins (8) pulls down an interception intended for Iowa State wide receiver Xavier Hutchinson (8) during the second half of an NCAA college football game in Ames, Iowa, in this Saturday, Sept. 11, 2021, file photo. The key matchup in fourth-ranked Penn State's showdown with No. 3 Iowa pits the Nittany Lions' passing combo of Sean Clifford and Jahan Dotson against a defense that leads the nation with 12 interceptions. (AP Photo/Matthew Putney, File)

IOWA CITY, Iowa (AP) — Iowa leads the nation in interceptions, and Penn State features one of the most dynamic passing combinations in Sean Clifford and Jahan Dotson.

How the third-ranked Hawkeyes fare in their showdown with No. 4 Penn State at Kinnick Stadium on Saturday could hinge on whether they can keep Clifford and Dotson under control.

"Dotson’s got that big play-making ability,” safety Kaevon Merriweather said Tuesday. “And you’ve got a quarterback like Sean Clifford who puts the ball in places where only his receivers can get it.”

Clifford has thrown for 1,336 yards and 11 touchdowns. Six of those have gone to Dotson, who has 446 receiving yards on a Big Ten-leading 35 catches.

In the 28 games Clifford and Dotson have played in together since 2019, they've connected a program-record 18 times for touchdowns.

“It’s pretty cool to hear when you break some sort of record,” Dotson said. “Coming from a historic program like Penn State is literally what I came here for. Just have fun. Have fun with the guys, break records. It’s all fun.”

Clifford and Dotson broke the record of 17 TD connections set by Todd Blackledge and Kenny Jackson in 1980-82.

“There’s been really good football played here for a long time,” Nittany Lions coach James Franklin said, "so when you can break a record or do something that’s never been done here before, to me, it says something, so that’s a great stat.”

Of the 18 touchdowns Clifford and Dotson have teamed up on, all but two have come with Clifford set in the pocket. At least six have been deep balls where Dotson easily beat one-on-one coverage.

“I think the first thing is Jahan’s good,” Franklin said. “That helps. Then, I think the combination of Jahan’s talent and the time that Sean and Jahan have spent together, whether it’s on the practice field, whether it’s watching film, whether it’s in meetings. And then, they’ve played a lot of games.”

Dotson is adept at creating space between himself and the defender, Clifford said, and he has great hands.

“And then he’s fast,” Clifford said. “I mean, he’s just the whole package. He’s the best wide receiver in the country.”

Clifford and Dotson have played against the Hawkeyes the last two seasons.

Merriweather said he's confident the Hawkeyes will be prepared for what Clifford and Dotson throw at them. They also have to contend with another talented receiver in Parker Washington, who has 25 catches for 331 and two touchdowns.

“It’s just film study,” Merriweather said. “We’re in the film room with each other every single day, making sure we’re on the same page with what we’re reading, what our keys are, everything else.”

The Hawkeyes picked off six passes in last Friday's 51-14 win at Maryland. The Terrapins' Taulia Tagovailoa was taken out of the game in the second half, making him the fourth starting quarterback who hasn’t made it through an entire game against Iowa this season.

Tagovailoa had entered the game with 10 touchdowns against just one interceptions. But Iowa made him look bad.

Six different players picked off a pass, tying a school record for most players with a pick in a single game. The six interceptions were Iowa's most in a game since it had a school-record seven against Wisconsin in 1982.

The Hawkeyes will be going against a more seasoned quarterback in Clifford, who has appeared in 30 games, and a receiver in Dotson who, according to Pro Football Focus, has only three drops in 130 targets since the start of the 2020 season. He has no drops in 46 targets this season.

“We have to know where he is at all times,” Merriweather said.