Kiffin becomes coach at Ole Miss, steps down at FAU 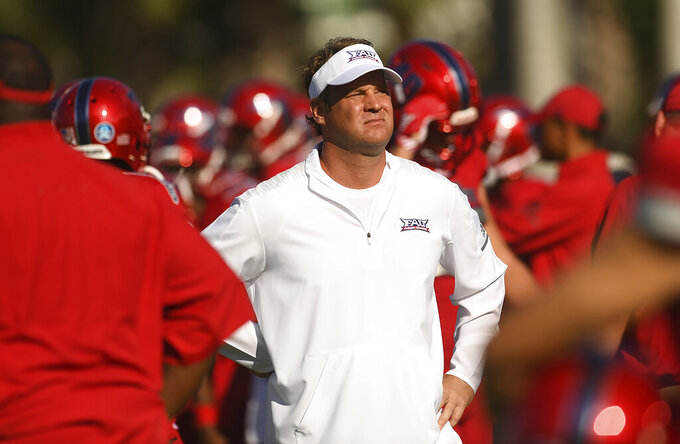 BOCA RATON, Fla. (AP) — Lane Kiffin is back in the SEC, taking over at Ole Miss.

Kiffin and the Rebels made the announcement Saturday after Florida Atlantic defeated UAB in the Conference USA championship game, the Owls’ second league title in his three seasons. It had been college football’s worst-kept secret since Friday, and the schools ended all doubt Saturday afternoon by conceding that the deal has been made.

“I am truly honored and humbled to join the Ole Miss family, and recognize this as a special opportunity to lead Rebel Football into the future," said Kiffin, who will be introduced in Oxford, Mississippi on Monday.

If there was any doubt when Saturday began, it went away once a short video clip of his son’s reaction to the news went public. ESPN’s SEC Network tweeted out a clip of Kiffin’s son Knox being told that he was getting on a jet Monday — because his father has a new job.

“Your dad is the new head coach of Ole Miss,” a woman on the tape says to the boy.

Indeed, the SEC is going to be Kiffin’s playground once again. And Lane Kiffin — who wanted the attention Saturday in his news conference to be on FAU's win — conceded that he had watched the clip of his son about 25 times.

“That was awesome to see his reaction,” Kiffin said. “That’s just special. For those of you who have children, to see your child react like that, it’s pretty neat.”

He then paused and smiled.

“But I blame his mom for putting that out there,” Kiffin said.

Kiffin went 26-13 in his three seasons at Florida Atlantic and is 61-34 in parts of eight seasons as a college head coach at Tennessee, USC and FAU.

Kiffin takes over an Ole Miss program that hasn’t produced a winning season since going 10-3 in 2015 and winning the Sugar Bowl, capping a string of four straight bowl appearances. The Rebels went 4-8 this season.

“We’ve got to find a head coach who can walk into a room, and absolutely take over that room and galvanize people, bring them back,” Ole Miss athletic director Keith Carter said earlier in the week. “I think people want to support, they want to come back, they want to come to Ole Miss football games, but we just lost some of that luster.’’

It was always assumed that bigger schools would come calling for Kiffin again. He made about $3 million in salary over his time at FAU, and now will likely command more than that annually from the Rebels.

His tenure with FAU will likely be remembered as exactly what Kiffin needed. FAU won a bunch of games — more in his three seasons than they did in the previous seven combined — and did so without any hint of major scandal.

There was some controversy; Kiffin brought in Kendal Briles as his first offensive coordinator, after Briles was on his father Art Briles’ staff at Baylor when that program was rocked by a sexual assault scandal. There was some newsmaking; Kiffin brought in players from the Netflix documentary "Last Chance U." He offered scholarships to kids who are still several years from college. And there, of course, was Twitter, where Kiffin’s dry sense of humor could make news as soon as he touched the send button.

He’s 44 now. He’s apparently learned to live in the public eye, or at least how to deal with constant scrutiny. And now he’s back in the SEC — three years after his stint as Alabama’s offensive coordinator ended and he wound up starting anew at FAU.

“They’ve done a great job and they’ve helped me,” Kiffin said. “They’ve kind of taught me. I was used to all players thinking they were going to the NFL and your job is to get the players drafted the highest that you can. This place changed me to realize, I’ve got a bigger calling than that. My calling is to really help these kids develop.”

The next chapter is at Ole Miss, where Kiffin has some history.

In 2009, his lone season at Tennessee, the Volunteers went to Oxford and lost 42-17. Alabama was 1-2 against the Rebels in Kiffin’s three seasons as offensive coordinator with the Crimson Tide, losing in 2014 and 2015 before winning in 2016.

The NCAA forced Ole Miss to vacate 33 wins over a six-year period — including those two wins over Alabama. Kiffin tweeted that Alabama coach Nick Saban’s record should then be changed as well, noting that if those two outcomes no longer count “we only lost once together.”

The reason why Ole Miss had to vacate those wins because the NCAA found the school committed numerous recruiting violations — including some by Kiffin’s brother, former Rebels defensive line coach Chris Kiffin. Chris Kiffin was coaching for his brother at FAU when the ruling came out and is now with the San Francisco 49ers.

He's left some jobs on bad terms. Not this time. He left FAU as a champion.

“You don’t win two conference championships because you hire a head coach,” Kiffin said. “You have to have a lot of things in place and a lot of people helping. That’s what happened here.”