Klieman winning games, winning over fans at No. 13 K-State 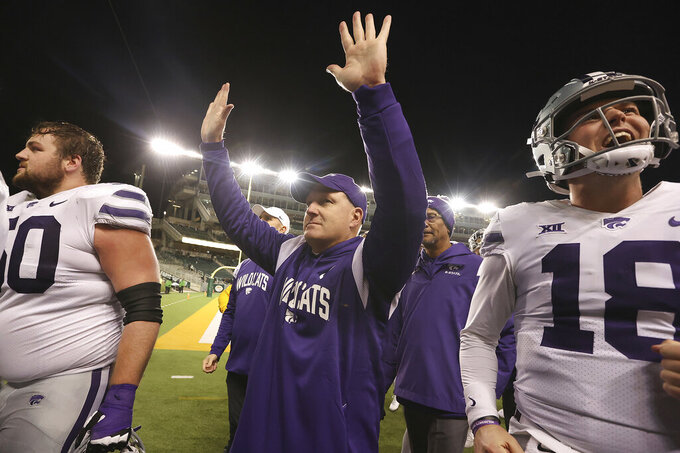 MANHATTAN, Kan. (AP) — Chris Klieman received a rather tepid reception from many Kansas State fans when he was hired four years ago.

Many of them pined for someone from Hall of Fame coach Bill Snyder's tree, or a coach with a higher profile who had won at college football's highest level. Klieman was a longtime small college coach — albeit a wildly successful one — who had worked under Kansas State athletic director Gene Taylor at North Dakota State, making his ultimate hiring in Manhattan feel as if it was an underwhelming yet foregone conclusion.

Yet, from the moment Klieman arrived, he endeared himself to those same apprehensive fans. His blue-collar work ethic dovetailed perfectly with a fanbase that prides itself on earning what it gets, and his hard-nosed and mistake-free brand of football coupled with no hint of ego or selfishness fit seamlessly in the Flint Hills.

Just as importantly, Klieman has won.

The No. 13 Wildcats are 9-3 and headed to the Big 12 championship game, where they will try to avenge one of the defeats by potentially denying third-ranked TCU a College Football Playoff spot on Saturday in Arlington, Texas.

“The way this team has kind of persevered through this year, and fought through a lot of adversity, it shows the culture that he's built,” said Kansas State quarterback Will Howard, who lost the starting job to Adrian Martinez before the season, then assumed control of the team when Martinez got hurt in the first game against TCU.

“There's true love in that locker room,” Howard continued, “and everybody cares about each other and wants to do it for each other. There's no individuality. Everybody just wants to get a win for the program, and for those guys, because there's true love there. And that's a big thing that coach inspired and credit to him for that.”

The path to the Big 12 title game hasn't been smooth.

There were defections when Klieman took over as players committed to Snyder headed elsewhere. And after a bowl win in his debut, the Wildcats struggled through both the pandemic and locker room discord to a 4-6 finish in 2020.

Kansas State running back Deuce Vaughn, who could soon become a two-time All-American, said there was a reset after that season. Some of the malcontents moved on, and Klieman turned to the veterans of the program to lead the way, and the result of what he calls a “player-led program” was an 8-5 record and Texas Bowl triumph last year.

“Every way can and will be successful if you buy into the new way,” Klieman said. “And credit to those guys that bought in. There's a lot of guys that didn't fit or buy in or whatever that are no longer with our program, and these guys stuck with all of us. There was some trying times in 2020, for sure. You guys saw it and I lived it. And for those guys to stay the course together and live through those times, this is the culmination for those older kids.”

There's been some trying times this season, too.

The Wildcats lost at home to Tulane in September, when few knew the No. 18 Green Wave would be within a win in the American Athletic Conference title game from playing in a New Year's Six bowl game.

They lost to the Horned Frogs on the road, blowing a 28-10 first-half lead in an injury-riddled 38-28 defeat. And a third loss to Texas last month left the Wildcats needing to sweep their final three games and get some help to reach Arlington.

All of that transpired, and a win over rival Kansas on Saturday night sent the Wildcats to AT&T Stadium.

“It’s definitely been something we don’t take for granted,” Kansas State cornerback Julius Brents said. “We had this goal back in January. To see it all kind of come to light, it’s great, and there’s a lot of work to be done. We're not going down just to participate. We are going down there to win.”

Winning titles this time of year is something Klieman knows plenty about. The 55-year-old led North Dakota State to four national championships in a five-year span in the Football Championship Subdivision, a streak of unparalleled achievement that helped him land the top job at Kansas State four years ago.

Despite those early naysayers, Klieman has proven that he can indeed win at college football's highest level.

“Our guys have really risen up, especially when people have doubted them,” he said. “I can't say enough about our team leaders and our captains. This is a player-led team. They've taken ownership of it. And I think that's really cool.”