Lawrence, No. 4 Clemson rout No. 2 Notre Dame for ACC title 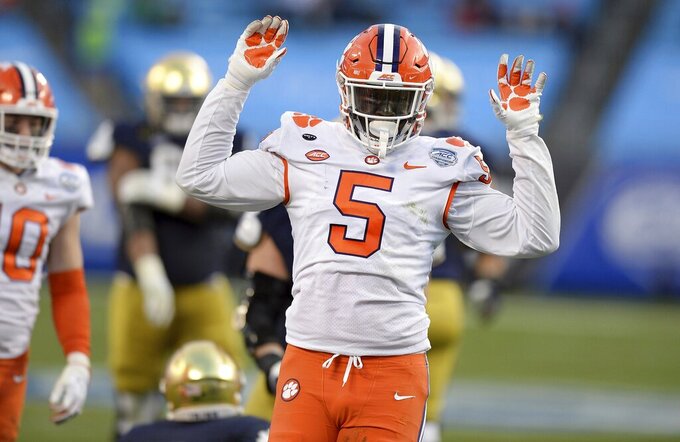 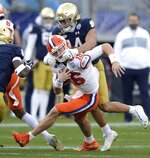 CHARLOTTE, N.C. (AP) — After a heartbreaking 47-40 double-overtime loss to Notre Dame last month, Clemson coach Dabo Swinney assured his players in the locker room that there would be no trophy handed out that night.

There would, however, be one up for grabs when they got to Charlotte for the Atlantic Coast Conference championship game.

The Tigers haven't blinked since, staying focused on their goal. On Saturday they collected the hardware — again.

Trevor Lawrence had 412 yards of offense and three touchdowns, Travis Etienne ran for 124 yards and a score and No. 4 Clemson dominated No. 2 Notre Dame 34-10 on Saturday to win its sixth straight ACC title.

“All we had to do was take care of business after that,” Lawrence said about the loss in South Bend. “We remember fans running off the field and getting in our face. You remember those images and keep those things in your head.”

Lawrence, who didn't play in the first meeting because the coronavirus, threw long scoring passes to Amari Rodgers and E.J Williams in the first half to help the Tigers (10-1) lock up a spot in the College Football Playoff for the sixth straight season.

“His ability to run really stresses your coverage calls,” Notre Dame coach Brian Kelly said. “... So what you try to do is bring some pressures that eliminate those runs. It just opens up some 1-on-1 matchups that are not favorable.”

The junior quarterback did it all, even throwing a block to spring Etienne for a 15-yard gain on a third-down run late in the second quarter leading to a touchdown and a 24-3 halftime lead.

Clemson has won all nine games Lawrence has started by at least 18 points and their average margin of victory in those games is 33.6 points.

Swinney called Lawrence the best player in the country.

“It would be a crying shame if the Heisman didn’t attach their name to Trevor Lawrence," Swinney said. “I know that has become a stat award, but if you watch and you don't know this is the best player in the country, I don't what you're looking at.”

Rodgers had eight catches for 121 yards, and Williams added four for 80 yards including a dynamic one-handed grab where he reached behind his head to snag the ball.

The momentum changed late in the first quarter when Notre Dame kicker Jonathan Doerer, who had converted an ACC title-game record 51-yard field goal on the game's opening drive, clanked a 21-yard attempt off the right upright.

The Tigers quickly capitalized when Rodgers got cornerback Shaun Crawford to bite on a double move and hauled in a perfectly thrown pass from Lawrence for a 67-yard strike, the first of four straight scoring drives to close the first half.

After Clemson stopped Notre Dame on a key fourth-and-3, Lawrence moved the Tigers 72 yards in six plays, showing his pocket awareness by stepping up to avoid pressure and buy enough time to find Williams on a crossing route for a 33-yard score and a 14-3 lead — Notre Dame's largest deficit of the season.

Etienne broke it open when he took a handoff, slipped an ankle tackle and raced 44 yards for a touchdown on fourth-and-1 for a 24-3 lead with 21 seconds left in the first half.

“We let the second quarter get away from us, and that was the difference in the game,” Kelly said.

Clemson's depleted defense allowed Notre Dame to pile up 518 yards in the previous meeting, but limited the Fighting Irish (10-1) to 263 yards Saturday and sacked quarterback Ian Book six times. Book spent most of the game under duress, regularly flushed from the pocket.

Clemson’s secondary put the clamps on Notre Dame’s wide receivers, and running back Kyren Williams was limited to 49 yards rushing after finishing with 140 yards on the ground and three TDs in the first game. Book was held to 219 yards passing and no touchdowns.

“There were new looks for sure, in the secondary as well as up front," Book said. “But that was expected and it was on us to adjust, just be able to adjust on the fly. And we weren’t able to do that tonight.”

Clemson: The return of linebacker James Skalski and defensive tackle Tyler Davis, both of who missed the first game, proved to be a major difference for the Clemson defense this time around.

Notre Dame: The Fighting Irish could get nothing going in the passing game. Book was under pressure almost every time he tried to throw the ball and Notre Dame's wide receivers couldn't shake Clemson's defensive backs.

Clemson safety Nolan Turner will have to sit out the first half of the first-round playoff game after being ejected in the fourth quarter for targeting tight end Michael Mayer.

Clemson: No two-loss team had ever qualified for the College Football Playoff, so it was imperative the Tigers won to get a spot — and that's exactly what they did. “We are trending in the right direction and we are playing our best football,” Lawrence said.

Notre Dame: Notre Dame hopes to edge No. 5 Texas A&M for the final playoff spot. Kelly made his case for Notre Dame's inclusion, saying, “We played 11 games. We’ve beaten two top-15 teams. We obviously lost to the No. 3-ranked team in the country tonight. It wasn’t our best effort. But consistency, when you play 11 games, and you have a win over the No. 1 team in the country and then you win against an outstanding North Carolina team, I don’t know that you need to look any further than that.”