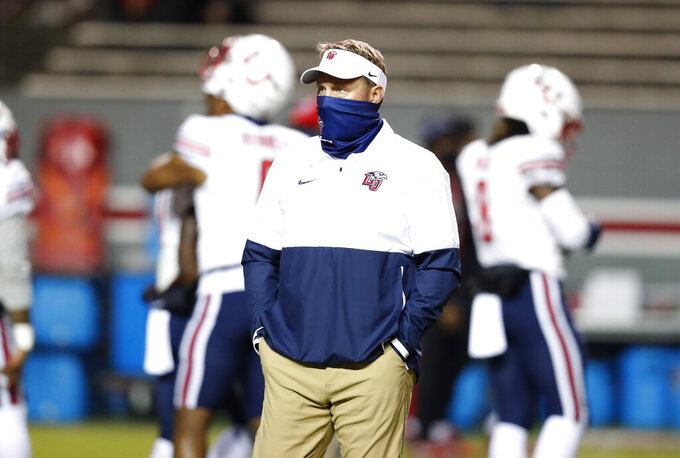 The Top 25 matchup between Coastal Carolina and Liberty on Saturday has been canceled due to COVID-19 issues, derailing the showdown between two programs that have taken more advantage of this unusual college football season than most schools.

The Flames announced Thursday that they are pausing football activities because of the coronavirus pandemic. In a release, Liberty officials said the decision was made by the medical staff at the school. Liberty had said previously that officials had notified Coastal Carolina of its COVID-19 situation but intended to still proceed with the game.

“After 11 straight weeks of relatively no issues, somehow, some way, we got stung starting last Sunday,” said Liberty coach Hugh Freeze, a former coach at Ole Miss who is in his second season at the evangelical school. “... Man, we were really looking forward to a Top 25 game down at Coastal. I love those type of games. I love the attention it brings to our program. I think our kids would flourish in that type of competition and having a chance to beat a top 15 team.”

The matchup would have been between teams that cracked the Top 25 for the first time in program history. Instead, Coastal Carolina will play No. 8 BYU on Saturday.

While disappointed by Thursday's announcement, Freeze had previously made no apologies for Liberty's success and national recognition.

“I think we’ve earned that in 2020,” said Freeze, whose Flames (9-1) climbed back into the poll after a 45-0 victory against Massachusetts. “Listen, I’m a realist and there’s a lot of teams in Power Five conferences that probably haven’t played as many games to judge their standing, but in this year, in this 2020, this craziness, we’ve been blessed.”

But the virus caught up to the Flames, forcing an abrupt end to their impressive regular season.

The Chanticleers (9-0) can relate to benefitting from a bizarre season that will now find them playing No. 8 BYU on short notice in another strange twist.

Like Freeze, Coastal Carolina coach Jamey Chadwell knows the pandemic limited the competition by causing many leagues to opt out of playing in the fall while several Power Five conferences chose to delay the start of their seasons. It's worked in their favor.

“It wouldn’t matter if we weren’t winning. But we had a door, we had an opportunity to open it and we’ve kicked it down to take advantage of it."

Both programs are relative new comers to the Football Bowl Subdivision. The Flames are in just their second full FBS season; the Chanticleers made the step up in 2017. And both have thrived under the national attention.

This season Liberty has beaten Syracuse and Virginia Tech, both of the Atlantic Coast Conference, on the ACC Network. They came up one point shy in a 15-14 loss to North Carolina State two weeks ago, and fell out of the Top 25 — albeit not for long.

“We’ve had a year of just tremendous exposure,” Liberty athletic director Ian McCaw said Wednesday. “We’ve made strides beyond what we could have imagined.”

The Chanticleers’ marquee victories came early as they beat Kansas 38-23 to start the season and No. 20 Louisiana-Lafayette 30-27 in mid-October.

The Liberty-Coastal Carolina matchup would have renewed an old rivalry from when both teams played in the Big South, often squaring off to determine the champion. It had only come together as a possibility during the summer when both programs found themselves needing to replace a a school on their respective schedules.

It was hard for most college football fans to imagine what would have been an improbable Top 25 showdown on Saturday. The Flames have spent four weeks in the rankings, climbing as high as No. 21 before losing to the Wolfpack. The Chanticleers have been in the poll for seven weeks.

Thursday's announcement was the latest setback in this season of what-might-have-been in college football.