Michigan State holds on for 27-21 victory over Rutgers 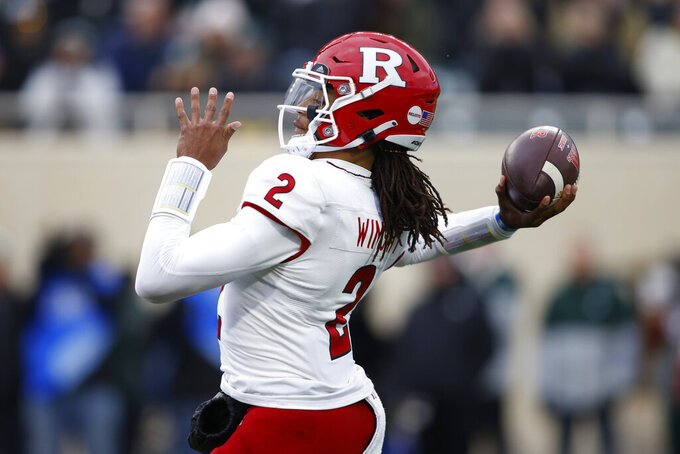 After dropping four straight games, the Spartans (5-5, 3-4) have won three of their last four.

“It's a lot more fun when you win,” Thorne said. "Football isn't all that fun when you're losing.

“Getting three of the last four is really good, and the one that we dropped (at Michigan) it could have been very different, a couple of plays here and there. I think we're playing a lot better than we were earlier in the year as a team. We just got to keep rolling.”

The Spartans built a 21-7 lead early in the third quarter on Thorne's 25-yard touchdown pass to Jayden Reed.

The Scarlet Knights (4-6, 1-6) pulled to within 21-14 when tight end Johnny Langan plowed up the middle on a one-yard touchdown run late in the quarter. It was the first time in the last three games that Rutgers had scored any points in the second half.

Rutgers had a chance to cut the margin in the final quarter but Jacob Slade blocked Jude McAtamney's 39-yard field goal attempt and cornerback Ameer Speed picked up the ball and returned it to the Michigan State 44. Seven plays later, Patton made a 34-yard field goal to give the Spartans a 10-point lead with 6:28 to play. He later added a 48-yard kick.

“That was huge," Michigan State coach Mel Tucker said. "We talked about that all week, about being able to get some push inside on their guards. We had been close in some other games this year, even recently.”

Gavin Wimsatt was able to bring Rutgers within six points with a 31-yard touchdown pass to Shameen Jones on a fourth and 29 play with 47 seconds left. The Scarlet Knights attempted an onside kick, but it was fielded by the Spartans who ran out the clock.

Rutgers coach Greg Schiano said his team's 14 penalties for 108 yards were a major factor in dashing any hopes of a victory.

“We played well enough in areas to win today, but that certainly wasn't one of them,” he said of the penalties.

Despite totaling 283 yards of offense and allowing Rutgers to cross midfield only twice in the first half, Michigan State could not pull away from the Scarlet Knights.

The Spartans opened the scoring in the first quarter when Thorne hit Daniel Barker on a 26-yard touchdown pass. The Scarlet Knights evened it late in the second quarter as Wimsatt capped a 96-yard drive with an 18-yard touchdown throw to Aaron Young.

Jalen Berger put Michigan State back on top 14-7 on the following possession with a two-yard run up the middle. The play was set up following a pass interference penalty in the end zone on Avery Young, giving the Spartans the ball at the Rutgers 2.

After earning Big Ten Defensive Player of the Week honors for his play last week at Illinois, Michigan State linebacker Cal Haladay followed it up with an even better performance against Rutgers.

Haladay finished with 19 total tackles, including one for a loss. He had a career-high 3.5 tackles for loss and finished with nine total stops against the Illini.

“That's a lot of tackles,” Tucker said. “He's going to need to get his feet up tonight, rest up and hydrate.”

Rutgers: The Scarlet Knights must win their final two games to be considered for a bowl berth.

Michigan State: With a win in one of their final two games, the Spartans will be bowl eligible for the second consecutive season.

Rutgers: Hosts Penn State on Nov. 19 and visits Maryland on Nov. 26 in the regular season finale.

Michigan State: Hosts Indiana on Nov. 19 and closes the regular season at Penn State on Nov. 26.