No. 1 LSU has sights set on SEC West title vs Arkansas 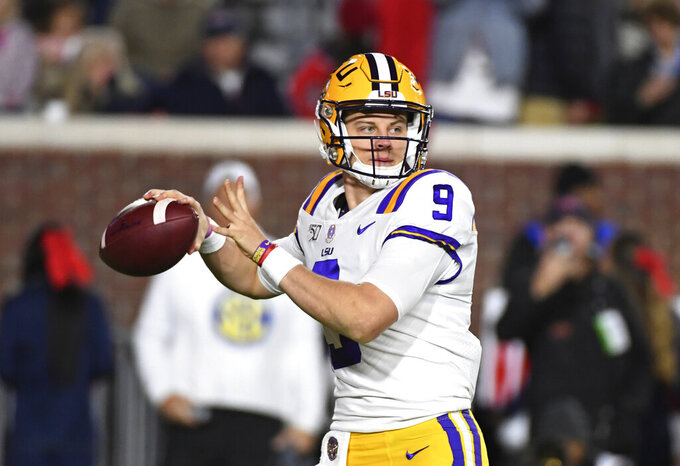 LSU quarterback Joe Burrow looks for a receiver during the first half of the team's NCAA college football game against Mississippi in Oxford, Miss., Saturday, Nov. 16, 2019. (AP Photo/Thomas Graning)

BATON ROUGE, La. (AP) — LSU coach Ed Orgeron appreciates as well as anyone the jolt a team like Arkansas could get from a coaching change.

“Always, always, no question,” said Orgeron, who was an interim head coach in 2013 at Southern California and in 2016 at LSU. “I think they get juice. Every time I've been an interim coach, the next week we came out on fire.”

Odds makers, however, appear unmoved by such sentiment.

The top-ranked Tigers (10-0, 6-0, Southeastern Conference), who are putting up the nation’s second most yards (556) and points (47.8) per game, are favored by six touchdowns when they host Arkansas (2-8, 0-6) on Saturday night. With a victory, LSU clinches the SEC West and its first conference title game appearance since 2011.

Arkansas tapped Barry Lunney Jr., a long-time assistant and former Razorbacks quarterback, to take over for Chad Morris, who was fired after a 45-19 loss to Western Kentucky two weeks ago.

Lunney lightheartedly noted that he had prior head coaching experience — with a fifth-grade basketball team in 1996 that was “not good.” He was under no illusions about how challenging his maiden test as a major college football head coach would be.

“It just so happens to be that we are playing right now the best football team in the country,” Lunney said. “We are going to one of the best environments in college football — at night.”

Lunney’s approach has been to give players ample time to “rest” and “recharge” during last week’s bye before asking them to invest the time and effort required this week to play their best as they try to rebuild a proud but reeling program.

Lunney also disputes the notion that the Razorbacks have “nothing to lose.”

“I stand against that,” Lunney said. “To me, as a football coach or as a competitor, that conveys the idea that, ‘Well, we can just go have some fun and give it a whirl and just see what happens.’”

Lunney’s focus is on what the Hogs “have to gain.”

Lunney played in one of the more memorable and unlikely Arkansas victories in the past few decades when the Razorbacks knocked off then-No. 4 Tenneessee, 25-24, in Knoxville in 1992.

Some other things to know about Saturday night’s Arkansas-LSU matchup:

If quarterback Joe Burrow is to remain a front-runner for the Heisman Trophy, he’ll be expected to maintain the prolific standard the LSU offense has set this season — at least while he’s on the field.

Orgeron made it apparent that Burrow’s job this week is to help LSU build a lopsided advantage as quickly as possible so reserves can get more some playing time.

Burrow has passed for 3,687 yards and 38 touchdowns this season, both LSU single-season records.

Tigers defensive players met this week to air some concerns after giving up 614 yards and 37 points in their previous game at Mississippi.

It was the fourth time this season the Tigers had given up at least 450 yards and 37 points.

Orgeron said he appreciates his players’ accountability but is focused more on how coaches can address the assignment busts and missed tackles that have occurred on opponents’ big plays.

“I don't want to get down on our players,” Orgeron said. “We're 10-0. We have a chance to have a great season. I know these guys are going to answer the bell.”

Lunney has declined to name a starting quarterback, even as he acknowledged he knew who it would be.

“We would be foolish to declare that to just clarify it for (the Tigers), so they can know who they’re preparing for,” Lunney said.

Boyd has 100-plus all-purpose yards in three straight games.

Edwards-Helaire is a finalist for the Paul Hornung Award, presented to the most versatile player in college football. He has 958 yards and 12 touchdowns rushing this season to go with 224 yards and one TD receiving.

The Tigers “spread you out and throw the ball around and then all of a sudden they hand it to somebody with his talent behind a line that’s got that talent and size,” Lunney said. “That’s what makes a great offense.”