No. 1 LSU wants to make sure it avoids letdown at Ole Miss 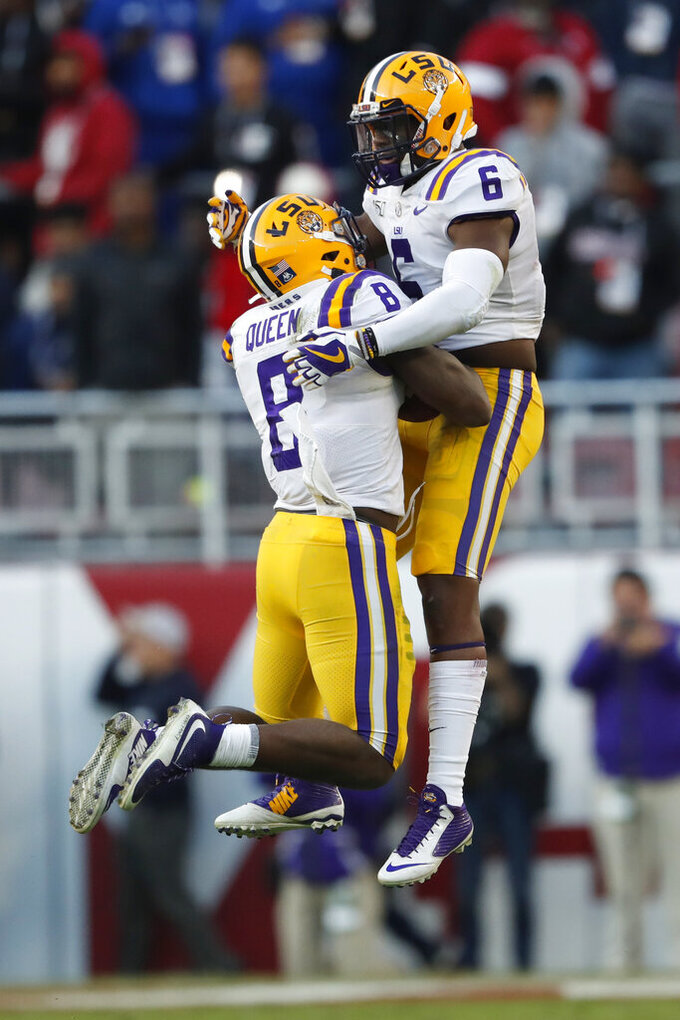 LSU linebacker Patrick Queen (8) celebrates with Jacob Phillips (6) after intercepting a pass in the first half of an NCAA college football game against Alabama, Saturday, Nov. 9, 2019, in Tuscaloosa, Ala. LSU won 46-41. (AP Photo/John Bazemore)

OXFORD, Miss. (AP) — After notching a season-defining victory at Alabama last week, No. 1 LSU is looking to avoid a letdown Saturday at Mississippi.

It’s a different type of challenge than they faced last week.

After dealing with Alabama’s high-powered passing attack in a 46-41 triumph over the Crimson Tide, LSU (9-0, 5-0 SEC, No. 1 College Football Playoff ) is dealing with a run-heavy Ole Miss offense commanded by fleet-footed freshman quarterback John Rhys Plumlee.

“They’re very difficult to stop on offense,” Orgeron said. “They have an excellent running game.’’

Ole Miss (4-6, 2-4) must pull the upset to maintain its slim hopes of becoming bowl eligible.

Some other things to know about the LSU-Ole Miss game:

LSU’s Clyde Edwards-Helaire is coming off a 103-yard, three-touchdown performance against Alabama.

“Unbelievable,” Oregon said. “I don't know if I have seen a performance like that as a football player in a big game like that. I really don't. I don't know, I can't recall.”

“He’s so important to our team,” Burrow said. “He can catch the ball out of the backfield. He makes it difficult to play man-to-man, because you have a linebacker matched up on him and no linebacker in the country can cover Clyde. And then you go zone and we can pound it up the middle.”

The Rebels are doing a better job of containing the run under first-year defensive coordinator Mike MacIntyre, but Edwards will be one of the best backs the unit has faced all season.

The win over Alabama ended LSU’s eight-game losing streak in that annual series and moved the Tigers atop the CFP rankings.

With Ole Miss, Arkansas and Texas A&M left on the schedule before a potential SEC championship game berth, the Tigers must maintain their focus.

“We have a really mature team that understands the magnitude of the moment and understands where we can go as a team,” Burrow said when asked how players would avoid the natural inclination to become distracted from the task at hand by the increasing likelihood of appearing in SEC title game and College Football Playoff. “They know what we can do. They know what’s ahead of us.”

Ole Miss has been formidable up front and much better at rushing the passer than it was in 2018.

“The pass rush techniques have gotten better as the year has gone along,” MacIntyre said. “We are definitely going to need a pass rush in this game. Burrow does a great job getting rid of the ball.”

Burrow has completed 78.9 percent of his passes to lead all Football Bowl Subdivision players. He went 31 of 39 against Alabama.

He could be in store for another monster game this week against a young Ole Miss secondary that has struggled at times.

Burrow said the Alabama game demonstrated that, “nobody can really stop us, and we can make lives difficult for a lot of defenses by putting different people in different spots, so we’re just going to keep doing what we do.”