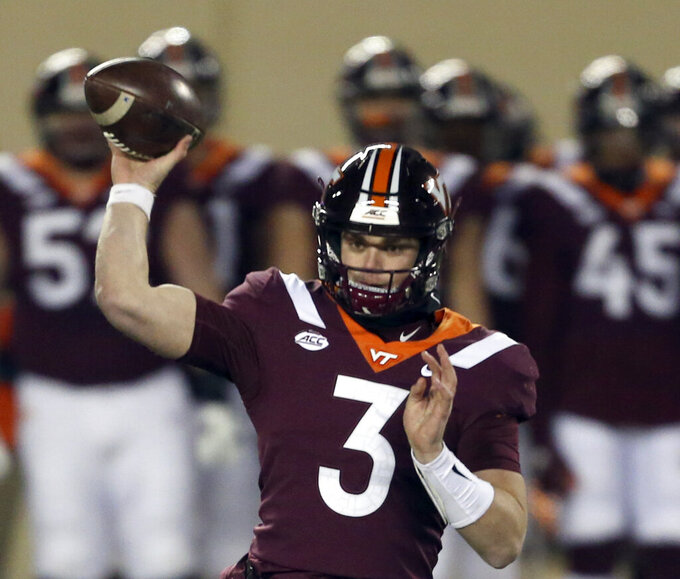 FILE - Virginia Tech quarterback Braxton Burmeister throws a pass during the first half against Clemson in an NCAA college football game in Blacksburg, Va., in this Saturday, Dec. 5, 2020, file photo. Few Power Five programs struggled through the pandemic more than Virginia Tech. Coach Justin Fuente and the Hokies hope to restore some order this season. (Matt Gentry/The Roanoke Times via AP, Pool, File)

North Carolina quarterback Sam Howell will get much of the attention this season from defenses preparing to slow the No. 10 Tar Heels.

He's gotten plenty from Virginia Tech as the teams prepare for their season opener on Friday night, but Howell is far from the only Tar Heel what has the Hokies' attention.

“There’s a lot to kind of unwrap with him and their offense,” Hokies coach Justin Fuente said. “First of all, they can run the football. It’s not just a situation where they’re dropping back and throwing it all the time.”

Virginia Tech got to see all that first-hand last season in a 56-45 loss. Howell threw for three touchdowns, but the Tar Heels also ran for 399 yards.

The good news for the Hokies is that running backs Javonte Williams and Michael Carter, and wide receivers Dyami Brown and Dazz Newsome have all moved on to the NFL, leaving Howell having to bring along new playmakers.

“I’m just really excited to see what we’ve got," the quarterback said. “We really don’t know what type of team we have. And we’ll know pretty soon on Friday night."

Coach Mack Brown said the presence of Howell and high expectations make it seem like the Tar Heels have “had sugar thrown all over us,” but added, ”If we’re doing our job, we’re going to have those expectations."

To help meet those lofty expectations, the Tar Heels brought former assistant Larry Porter back as a running backs coach and assistant special teams coordinator. Brown said the team is looking for more out of its special teams in 2021.

“So we have really made an effort to see progress. I like our plan better. I like our philosophy better. We’re all on the same page.”

Some other things to watch when North Carolina plays at Virginia Tech:

Lane Stadium is known for being notoriously loud, especially for a Thursday or Friday night game. It figures to be especially rambunctious as fans will be allowed to fill the stadium for the first time since the 2019 season, a span of 647 days.

“We played up there two years ago,” Howell said. "It’s hard to hear.”

The last time North Carolina played at Virginia Tech, the game went six overtimes — and Atlantic Coast Conference record — before the Hokies prevailed 43-41. Howell threw for five of his career total of 68 TD passes in that game. His next touchdown pass will make him the Tar Heels' career leader.

The Tar Heels lost 1,000-yard receiver Dyami Brown and Dazz Newsome from last year’s team to the NFL draft. That opens opportunities for young receivers like Josh Downs and Emery Simmons. Downs showed a glimmer with two touchdown catches, one for 75 yards, in the Orange Bowl against Texas A&M.

Hendon Hooker's transfer to Tennessee left the Hokies quarterback job to Braxton Burmeister, who Fuente said is one of the three or four best athletes on the team. He's also the fastest, having posted a speed of 22.53 mph according to GPS tracking technology over the summer. He's 3-1 as a starter.

Power Five conference teams often start the season against a Championship Subdivision team, but this is one of many marquee matchups to start the season. Both coaches hope they've prepared their team for the challenge.

“Most first games are lost more than won,” Brown said.

Fuente: “We play a team that has good players, good schemes. They can take advantage of mistakes. It amplifies all of those first game things that happen.”