No. 11 Penn State looks for 16th straight win over Rutgers 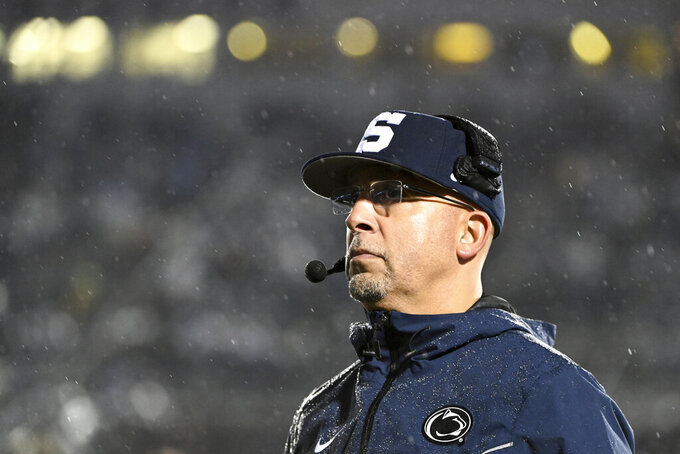 The Nittany Lions are going to play in a good bowl game. Winning out against Rutgers and Michigan State will help them land in a better one. The Scarlet Knights need to win their final two games to have a shot at a second straight bowl game.

Rutgers offensive line against Penn State's defensive front. If Scarlet Knights freshman QB Gavin Wimsatt is going to have any success, he needs a running game. If the Nittany Lions take that away, the offense is going to have a long day. Maryland was limited to 60 rushing yards on 37 carries last weekend and Penn State recorded seven sacks. The Nittany Lions have held seven opponents to less than 100 rushing yards.

Penn State: RB Nick Singleton. The freshman seemingly gets better each week. A month ago, he had a tendency to bounce all runs to the outside, even when there wasn’t space. He’s been much more efficient with his cuts lately, and his straight-line speed will be tough to handle. Rutgers has allowed an average of 244 yards rushing the last three weeks.

Rutgers: RB Kyle Monangai. The sophomore set a program record for a Big Ten game with 162 yards rushing against Michigan State. He opened the season as a starter but lost the job to Sam Brown. When the freshman was hurt against Indiana, he got the job back.

Penn State has held the Scarlet Knights to single-digit points in seven straight. … QB Sean Clifford became the Nittany Lions’ all-time leading passer last week (10,023 yards). ... Singleton averaged 11.1 yards per carry against Maryland. His 11 rushing scores are the most by any freshman in school history. … The Scarlet Knights lead the Big Ten and they are third in the country with five blocked kicks. DB Max Melton is tied for the national lead with three blocks. ... Rutgers P Adam Korsak and his coverage team have limited opponents to minus-10 yards on returns. There has not been a return for positive yards. The Australian has a 43.57 yard net average, third nationally. ... Rutgers gained 224 yards rushing at Michigan State, the most against an FBS opponent.