No. 12 Baylor saw turn with Brewer's near-comeback vs. WVU 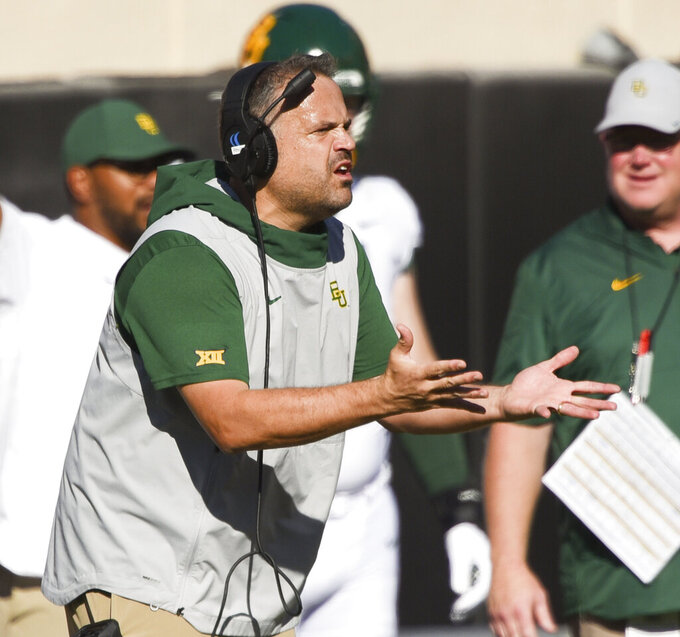 Baylor head coach Matt Rhule gestures to an official during the first half of an NCAA college football game against Oklahoma State in Stillwater, Okla., Saturday, Oct. 19, 2019. (AP Photo/Brody Schmidt) 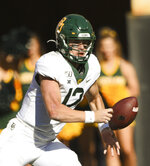 WACO, Texas (AP) — With No. 12 Baylor undefeated and alone atop the Big 12 less than two years after a 1-11 season, West Virginia's return to Waco provides a reminder on when the Bears started turning the corner.

Baylor trailed the Mountaineers by 25 points when Brewer, then a true freshman, entered that 2017 game on the final play of the third quarter. He ran for 48 yards and threw for 109 yards with two touchdowns, including a 9-yarder to Trestan Ebner with 17 seconds left before getting sacked on a tying two-point conversion attempt.

"You could see it in that game. I think we kind of said that all along when he first got there that spring," coach Matt Rhule said this week. "I just think we felt like hey, this guy's a football player, you know, and we've got to get him in the game ... He got in and finally it was this hey, this is his time, let's let him go play."

Two weeks after that impressive comeback that came up just short against West Virginia, Brewer's first start was in the only victory of Rhule's first season.

Brewer has started all but one game since, and in that one last year against Oklahoma State led the Bears to consecutive touchdowns late for a 35-31 victory when he came in late after starting that week in concussion protocol. They have rallied late to win their last two games, including 21 points in the fourth quarter for a 45-27 win on the road against the Cowboys.

"The biggest thing about Charlie is always, he loves to play, he doesn't let adverse conditions, adverse things affect him," Rhule said.

West Virginia coach Neal Brown's last two years as offensive coordinator and quarterbacks coach at Texas Tech were 2011-12, when Brewer's older brother, Michael, was there before the quarterback went to Virginia Tech. He remembers Charlie Brewer from recruiting his older brother.

"I've known him for a long time," Brown said. "I've tracked him since he was young, going back to probably elementary school. One of my favorite families I've ever had the opportunity to recruit."

While the Bears had an open date last Saturday, the other three Big 12 teams that were ranked all lost. Oklahoma's loss at Kansas State left Baylor alone in first place. Rhule said he had a lot of players texting him about what happened last weekend. He said his message was simple when he asked them what they learned, such as special teams matter and that third downs are really important.

"You can't play this game looking at the scoreboard," he said. "You have got to just go play and I think those messages that we say all the time, they were just reinforced by the games that happened this weekend. And not just Big 12 games."

Brown didn't spend a lot of time looking at what Baylor does.

"It's not that I don't respect them. I do. I'm not spending any time whatsoever looking at other teams in the league," Brown said. "Because for our football team, we've just got to get better."

Every Baylor opponent has been forced to punt on its opening drive this season. The Bears have allowed only 134 points through their first seven games, the fewest in the first seven games since allowing only 97 in that span to start the 1995 season.

OVER BEFORE IT STARTED

When Baylor played at West Virginia on a Thursday night last season, the Mountaineers scored less than a minute into the game. They had 434 yards by halftime, when they led 41-0 on way to a 58-14 victory. But West Virginia no longer has quarterback Will Grier or receiver David Sills V.