No. 12 Oklahoma faces another test in Iowa State 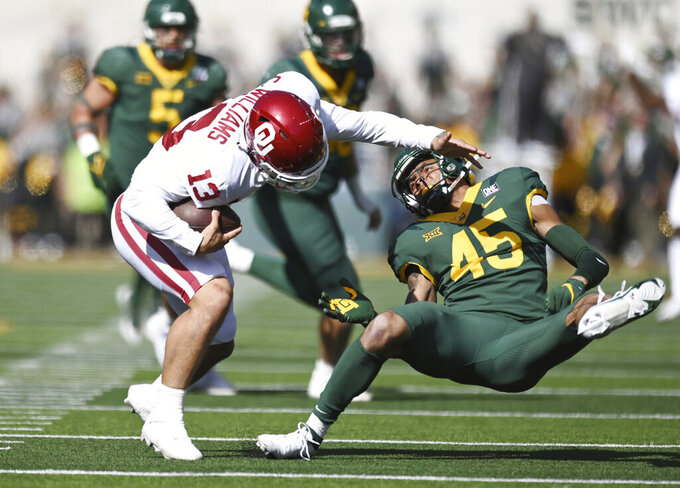 Oklahoma quarterback Caleb Williams is pulled down by Baylor linebacker Bryson Jackson in the second half of a NCAA college football game, Saturday Nov. 13, 2021, in Waco, Texas. (Ernesto Garcia/Waco Tribune-Herald via AP)

NORMAN, Okla. (AP) — Oklahoma's shot at a perfect season is over and its chances of reaching the College Football Playoff are slim.

If the 12th-ranked Sooners aren't careful, things quickly could get much worse. They are coming off a loss to Baylor — their first November loss in five years under coach Lincoln Riley. Now, they face a dangerous Iowa State squad on Saturday.

Iowa State (6-4, 4-3 Big 12) opened the season in the preseason top 10 but has stumbled recently in losses to West Virginia and Texas Tech. Yet, when Riley looks at the film, all he sees is the talent that led to the preseason hype.

He also knows the recent history between the programs. Oklahoma (9-1, 6-1, No. 13 CFP) has won three of the past five meetings, but Iowa State won in Norman in 2017 and last year in the regular season. Oklahoma beat Iowa State 27-21 in the Big 12 title game last year.

And the Cyclones will be motivated after Texas Tech's Jonathan Garibay hit a 62-yard field goal as time expired to give the Red Raiders a surprise 41-38 win last Saturday.

Though the Cyclones have fallen short of their expectations, they still are a talented, battle-tested team trying to make this a memorable season despite likely missing the Big 12 title game.

“We really wanted to go there this year, and it looks like it’s not going to be that way,” Iowa State tight end Chase Allen said. “But so what? We’ve only gone one time before. So what are we going to do, pack it in just because we’re not going to that game? No, we have so much to play for and so much to do, and we want to finish.”

Riley has used both Caleb Williams and Spencer Rattler at times this season to provide a spark when the other struggled. He said he remains committed to Williams as his starter:

"Not really at any time have I put a guy in thinking, all right, I’m going to put him in for, like, one series and pop him right back out, anything like that. ... But no, I still strongly believe that I like to have a firm starter and backup.”

Iowa State tight end Charlie Kolar is one of the nation's best. The redshirt senior from Norman, Oklahoma has 41 catches for 506 yards and four touchdowns. He had eight receptions for 76 yards and two touchdowns against Texas Tech last week.

He looks forward to returning to his hometown.

“It’s always exciting to go back, but like I said with the Texas Tech loss, we shouldn’t need that motivation to go play hard," Kolar said. "If you’re implying you can play harder against a (state) that you’re from, there’s something wrong with me. There’s a little more emotion, but how you prepare and play should be the same.”

Campbell said Iowa State defensive end Will McDonald was bothered by a lower body strain against Texas Tech, but he has practiced this week and should play. McDonald ranks second in the Big 12 with 10 sacks this season.

Oklahoma running back Kennedy Brooks has 2,920 yards rushing in his career — 12th on the school’s all-time list.

He has 853 yards rushing this season and could become the fourth Oklahoma running back to rush for at least 1,000 yards in three different seasons, joining Samaje Perine, Adrian Peterson and De’Mond Parker.

Oklahoma’s linebacker said on social media that his career is now over after he tore an ACL against Baylor. It’s the final setback of an injury-riddled career. Kelly began playing at Oklahoma began in 2016. He redshirted in 2019 due to an injury and missed the 2020 season due to injury.