No. 12 Oklahoma looks to bounce back from first loss 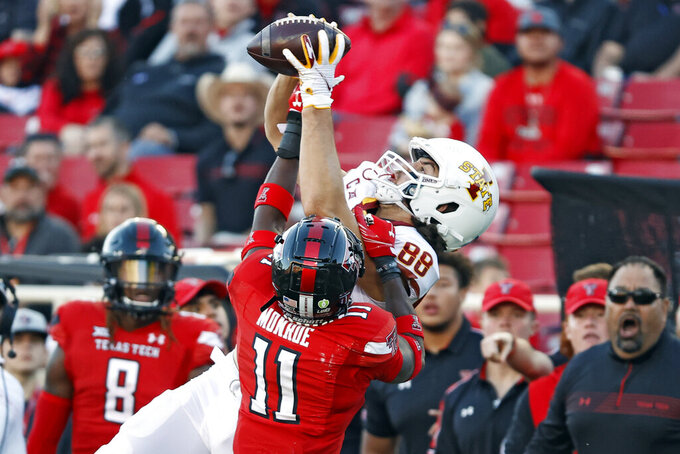 Oklahoma's nation-leading 17-game win streak was snapped last week with a 27-14 loss at Baylor. The Sooners have won six straight Big 12 titles, but that streak would be in serious jeopardy with a loss to Iowa State. Oklahoma still could reach the College Football Playoff, but the Sooners need a solid win over a talented Iowa State squad to maintain their slim hopes. Iowa State can brighten a disappointing season with a win. The Cyclones were in the preseason top 10 and are playing spoiler.

Oklahoma QB Caleb Williams vs. Iowa State defensive ends. Williams is starting to show some weaknesses, Now, he faces Will McDonald, who ranks second in the Big 12 with 10 sacks, and Eyioma Uwazurike, who ranks third in the conference with 7 1/2 sacks. The pair are a major part of why Iowa State ranks 10th nationally in total defense.

Iowa State: TE Charlie Kolar. The redshirt senior from Norman, Oklahoma is one of the nation's best tight ends. He has 41 catches for 506 yards and four touchdowns. He had eight receptions for 76 yards and two touchdowns against Texas Tech last week.

Oklahoma: RB Kennedy Brooks. When the Sooners commit to using him, he's one of the most dynamic players in the Big 12. He has rushed for 857 yards and 10 touchdowns this season.

The game will be a rematch of last year’s Big 12 championship game, which Oklahoma won 27-21. The Cyclones had beaten the Sooners 37-30 earlier that season. ... Iowa State is trying to bounce back after losing on a walk-off 62-yard field goal at Texas Tech last week. ... Iowa State RB Breece Hall ranks sixth nationally in rushing yards per game (117.2) and is second nationally in both scoring (108) and total touchdowns (18). Iowa State QB Brock Purdy ranks fourth nationally in completion percentage (73.4).