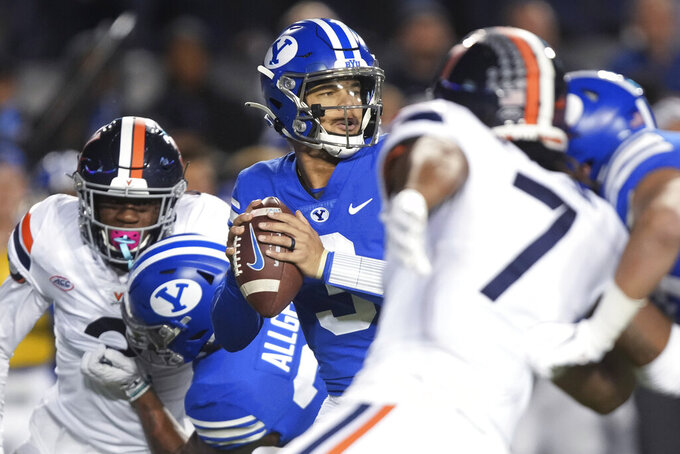 If he had to pinpoint it, the most prominent emotion for BYU defensive lineman Uriah Leiataua will be satisfaction over sadness.

Sure, his final game at LaVell Edwards Stadium will be Saturday when the 17th-ranked Cougars host Idaho State. But he’s enjoyed every moment of this bonus season.

As part of senior day, Leiataua will be recognized by the Cougars (7-2, No. 15 CFP) along with receiver Samson Nacua and defensive back Jared Kapisi.

One final chance to take it all in.

“I met some cool people,” said Leiataua, who has played in 45 games and recorded five sacks since 2017. “It’s been amazing for me, and I love the fact that I came back. I’m going to miss it for sure. ... I feel grateful.”

The Cougars improved to 15-4 under coach Kalani Sitake when playing as a ranked team last weekend when they beat Virginia 66-49 in a wild one. BYU amassed 734 total yards including 266 yards on the ground from Tyler Allgeier. He also had five touchdowns.

“I expect them to empty the tank because we have a bye next week,” said Sitake, whose team closes out the regular season at Georgia Southern (Nov. 20) and Southern California (Nov. 27). “That is the focus. We’ve done pretty good on being respectful and securing wins.”

Leiataua hopes he played a role in engraining one thing in particular — work ethic.

“That they understand that when they come here, it’s to work," Leiataua said. "It’s to build upon this legacy that I hope that we cultivated as a team, especially as players. That’s something I really hope stays with BYU.”

The Cougars and top-ranked Georgia remain the teams with five wins over FBS schools with winning records. BYU has victories over Utah (5-3), Arizona State (5-3), Utah State (6-2), Washington State (5-4) and Virginia (6-3).

“An opportunity to be at home again. It's senior day,” Sitake said. “I want to send them out with a win.”

Samson Nacua and his younger brother Puka each had 107 yards receiving and a touchdown against Virginia.

“I had no clue, but it was amazing,” Samson Nacua said. “It’s been cool to see Puka do his own thing, and watch and cheer him on and come into the game and ball out with him.”

Kapisi has witnessed a culture change over his time at BYU.

“You can see it out in the field,” Kapisi said. "When any player makes a play, everybody’s happy for that player. Before, I didn’t see that kind of brotherhood on the team, so it’s been great to see it grow every year.”

Sitake said quarterback Jaren Hall is steadily approaching 100%. It’s showing on the field, too, after he missed time due to a rib injury. Hall threw for 349 yards and three TDs last weekend.

“He’s feeling really good now,” Sitake said. “He did a good job at creating space and had no turnovers. That’s a good sign for us.”

“I love the challenge," said Dawson, who had a 45-yard pick-six last weekend against Weber State and leads the Big Sky in passes defended. “I love when the fans get into the game. It’s a great atmosphere.”