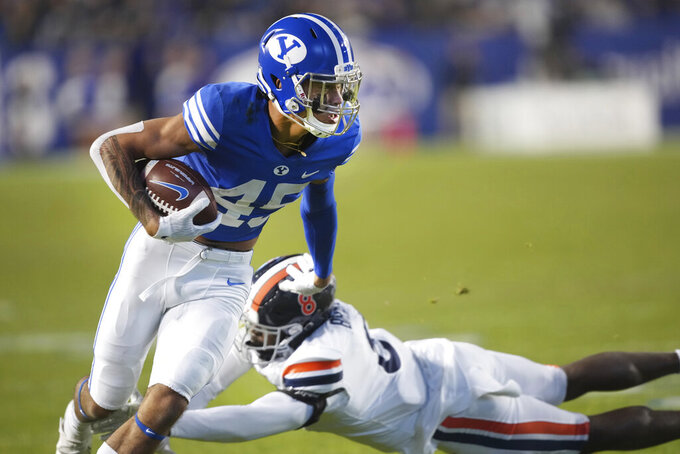 Line: No line, according to Fanduel Sportsbook.

Senior Day at LaVell Edwards Stadium, with receiver Samson Nacua, defensive back Jared Kapisi and defensive lineman Uriah Leiataua being recognized. There also could be a few COVID-19-year juniors who are honored if they decide not to pursue an extra year. The Cougars are No. 15 in the first College Football Playoff rankings this season. Idaho State plays on the FCS level and its only win was Oct. 9 against UC Davis. BYU improved to 15-4 under coach Kalani Sitake when playing as a ranked team after beating Virginia in what looked more like a basketball score, 66-49.

Idaho State's front line vs. BYU's running back Tyler Allgeier, who's currently No. 3 in the nation in yards rushing (1,127). Allgeier had a career-most 266 yards and five scores in a win over Virginia. The 266 yards were the third-most in a game for BYU, behind only Jamaal Williams, who had 286 against Toledo in 2016, and Eldon Fortie, who gained 272 in 1962. Idaho State linebacker Connor Wills has 57 tackles this season and a forced fumble.

BYU: Leiataua leads the team with 2 1/2 sacks and came up with a big forced fumble and recovery in the fourth quarter against the Cavaliers.

The Bengals' last victory over an FBS team was in 2017, when they beat Nevada 30-28. ... The average score in the six games against the schools is BYU 38.3, Idaho State 7.7. ... The Cougars and top-ranked Georgia are the lone teams with five wins over FBS schools with winning records. BYU has victories over Utah (5-3), Arizona State (5-3), Utah State (6-2), Washington State (5-4) and Virginia (6-3). ... The offense of the Cougars checks in nationally at 13th in total first downs, 21st in third-down conversions and 24th in sacks allowed per game. ... BYU LB Payton Wilgar turned in a career-best 11 tackles against Virginia, along with an interception.