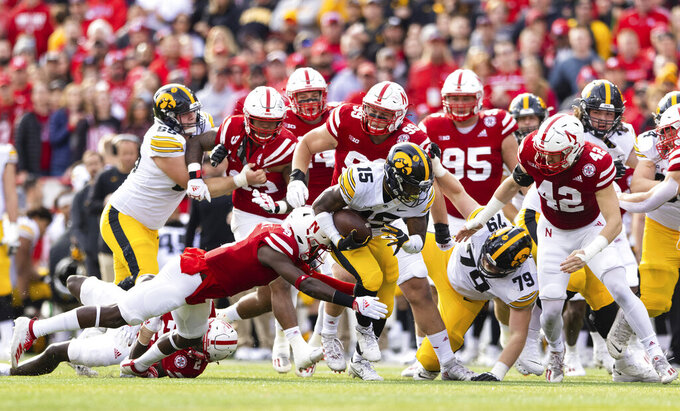 Iowa's Tyler Goodson (15) carries the ball as Nebraska's Marquel Dismuke (9) dives for the tackle during the first half of an NCAA college football game, Friday, Nov. 26, 2021, at Memorial Stadium in Lincoln, Neb. (AP Photo/Rebecca S. Gratz)

LINCOLN, Neb. (AP) — Iowa once again did what Nebraska has been unable to do all season, and that's why the Hawkeyes own at least a share of a Big Ten West title and the Cornhuskers head into winter off their worst year since 1957.

Spencer Petras ran for a 2-yard touchdown with 2:58 left to give the 17th-ranked Hawkeyes their first lead, and they came back from a 15-point deficit in the third quarter to beat Nebraska 28-21 on Friday.

The Hawkeyes (10-2, 7-2) won their seventh game decided by 10 points or less. Now they need Minnesota to beat Wisconsin on Saturday to go to the conference championship game next week in Indianapolis.

“I think that’s been the story of the season. We’ve been in these close games and we just find ways to win, find ways to finish on top," Iowa star center Tyler Linderbaum said.

Iowa won the border battle for the seventh straight year, along with the Heroes Trophy, but not before Jermari Harris intercepted Logan Smothers' pass at the Iowa 2 with 43 seconds to play.

“It’s a great feeling coming into a packed house and leaving with a trophy,” Linderbaum said.

The loss was another gut punch to Nebraska (3-9, 1-8). The Cornhuskers, who won't go to a bowl for a fifth straight year, finished with losses in six straight games and eight of nine. Their nine losses were by a total of 56 points.

“Everything we’ve been through this year as a team, 99% of teams would have folded and quit,” Nebraska coach Scott Frost said. “There’s no quit in these guys. Sometimes life teaches you tough lessons. I appreciate the fight and commitment they’ve had. No one can say that group shut it down.”

Smothers, making his first start in place of the injured Adrian Martinez, threw for 199 yards and ran 24 times for 64 yards and two touchdowns.

“It's victory from the jaws of defeat maybe, but we kept fighting and we never lost faith on the fact that we were going to come out with a victory,” defensive end Zach VanValkenburg said.

Nebraska had looked ready to get its breakthrough win when Goodson fumbled at the Huskers' 6 and Smothers led them 94 yards in six plays for a double-digit lead.

But Iowa, with the Big Ten's least productive offense, was able to turn to its elite defense and special teams to pull this one out.

Iowa got within 21-16 early in the fourth when Henry Marchese blocked William Przystup’s punt and Kyler Fisher grabbed it and ran it 14 yards for a touchdown.

On Nebraska’s next series, Smothers fumbled and Iowa’s Logan Lee recovered at the Hawkeyes’ 46. The Huskers forced a three-and-out, but Tory Taylor’s punt pinned them at their 7. Smothers, under pressure, made a desperation throw from his end zone and was called for intentional grounding, resulting in a safety.

Petras, who replaced Alex Padilla to start the second half, got the Hawkeyes to the Nebraska 26 on their ensuing series and Caleb Shudak kicked his fourth field goal of the game from 44 yards to tie it.

The Hawkeyes forced a punt, and Goodson broke a 55-yard run before Petras scored the go-ahead touchdown.

“Pretty special, just the way it happened,” Petras said. “We knew that we needed a spark, and Henry Marchese gives us a huge punt block, they turn them over a couple times and it gives us a chance.”

Iowa: The Hawkeyes were able to overcome a two-score deficit for the second time this season and reach 10 wins for the seventh time under 23rd-yera coach Kirk Ferentz.

Nebraska: The Huskers ended with nine losses for only the second time in program history. Frost is 0-13 against ranked opponents, and the Huskers have dropped 17 in a row against the Top 25 since 2016.

The Hawkeyes won't drop and probably will move up if teams ahead of them slip up on Saturday.

Frost now turns his attention to recruiting and hiring four offensive assistants to replace the ones he fired Nov. 8. Plus, he’ll be waiting to hear which veterans will return for an extra year of eligibility granted by the NCAA because of the pandemic, and which players will head to the transfer portal.

His struggle to turn around the program through four years led to his contract being restructured and cutting his pay from $5 million to $4 million in 2022.

Iowa: Big Ten championship game on Dec. 4 if Minnesota beats Wisconsin on Saturday. Otherwise, it's time to prepare for a bowl.