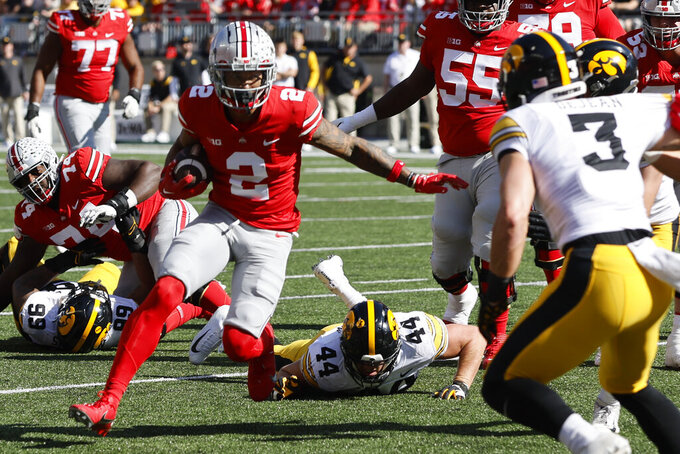 Once Ohio State quarterback C.J. Stroud found his rhythm in the second half Saturday, the Hawkeyes couldn’t keep a lid on one of the flashiest offenses in the nation.

Stroud threw second-half touchdowns to four different receivers, and the second-ranked Buckeyes capitalized on six Iowa turnovers in a 54-10 thumping.

Tanner McCalister had two interceptions and Tommy Eichenberg had a pick-6 as Ohio State took advantage of an inept Iowa offense to consistently start drives with good field position.

“Unfortunately, we never gave ourselves much of a chance,” Iowa coach Kirk Ferentz said.

“When you play a top-10 defense, it’s not going to be fireworks every series,” Ohio State coach Ryan Day said.

“I think the story is about the defense and how well they played,” he added.

Miyan Williams rushed for a first-half touchdown, and Stroud threw to Marvin Harrison Jr., Emeka Egbuka, Julian Fleming and Mitch Rossi for scores in the second half.

“The first half was kind of weird,” Stroud said. “In the first half, we just have to execute better. It’s good to get that under our belts, though. The second half of the season is very tough, and you’re going to have games when you’re not really clicking early on, and you got to get it going. So once we got it going, I felt like we became the dynamic offense that we know. I just felt like we had some swagger back.”

On Iowa’s first play from scrimmage, Spencer Petras threw right into the arms of McCalister. Ohio State took over at the Iowa 32 but had to settle for a 46-yard field goal.

On Ohio State’s first play after an Iowa punt, defensive end Joe Evans came through the middle untouched and smashed into Stroud, who fumbled at his 11. Evans scooped it and trotted in for what would be Iowa’s only touchdown.

Alex Padilla took over for Petras in the third quarter and on the second play was picked off by McCalister at the Iowa 15.

Four plays later, Stroud roped a 6-yard TD pass to Harrison and extended the lead late in the third with a 13-yarder to Egbuka.

Stroud hit Fleming in stride tearing down the middle for a 79-yard TD — by far the prettiest play of the day — and then tossed a short scoring pass to Rossi.

“They have a quarterback who can put the ball on a dime,” Iowa safety Kaevon Merriweather said. “Whatever plays they needed, he was able to put the ball on the money, and he’s got one of the best receiving corps out there.”

Iowa: The six turnovers were the most for Iowa since committing that many against Indiana in 2009. It was the most points allowed by Iowa since a 56-35 loss to Ohio State in 1995. The two quarterbacks combined to go 11 for 24 for just 81 yards and three interceptions.

Ohio State: Stroud took a while to get going but looked like his old self in the second half. He was 20 for 30 for 286 yards. He leads the nation with 28 touchdowns.

Noah Ruggles contributed four field goals after kicking just two in the previous six games. He was 2 for 3 on field goals coming in. His 46-yarder in the first quarter was by far his longest of the season.

Buckeyes should stay put at No. 2, ahead of Tennessee. No. 1 Georgia was idle.