No. 2 Oklahoma focused on short-term ahead of move to SEC 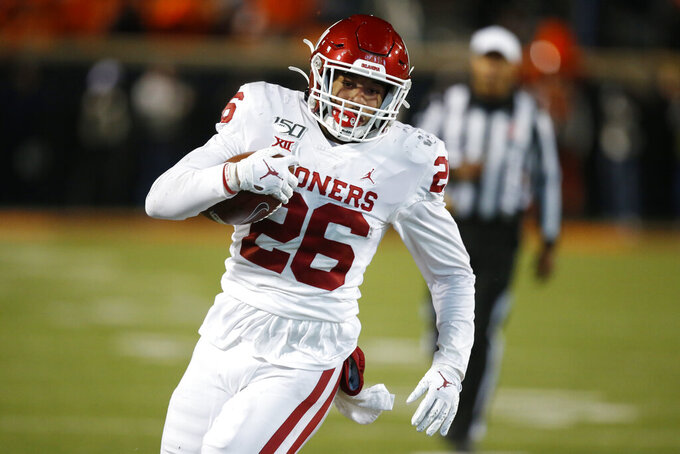 NORMAN, Okla. (AP) — While Oklahoma's plans to eventually join the Southeastern Conference have generated plenty of excitement, the Sooners are focused on more immediate goals, such as chasing their seventh consecutive Big 12 championship and their first national title since 2000.

“It’s exciting to think about,” Oklahoma coach Lincoln Riley said of the SEC move, set to happen in 2025, “but I guess for me, it’s tempered because of the task at hand. ... I mean, sure it will be great when it happens, but it doesn’t matter right now. I mean, right now, we’re a member of the Big 12.”

It’s easy to see why Riley wants to live in the moment. Quarterback Spencer Rattler leads a talented, experienced team that is ranked No. 2 in the preseason AP Top 25 -- Oklahoma’s highest preseason ranking since 2011 and its best under Riley.

Oklahoma's offense was dynamic as usual a year ago, despite preparation time being limited by COVID-19 restrictions. Riley said things look even better now.

“You can tell we had spring ball,” Riley said. “You definitely can. We’re a lot further along. A lot more consistency. I would imagine everybody else in the country is, too. I like what we’ve done in the first two weeks.”

Rattler is already a star. In 11 games last season, he passed for 3,031 yards with 28 touchdowns and seven interceptions. Now he has a season as a starter under his belt — one that concluded with a 55-20 Cotton Bowl win over Florida.

“I feel like a veteran now,” Rattler said. "Knowing what to expect, I'm very comfortable and focused. I feel like I’m in control.”

Linebacker Nik Bonitto is an anchor this year. The second-team AP All-American last season said the defense has a swagger now that some success has come from executing Grinch’s “Speed-D.”

“Once people started running to the ball, like, we’ve seen it can work,” Bonitto said. “Once you start getting takeaways, we see it equals victory. And a lot of those things that he preaches -- once we started doing it, it all started coming into fruition and we started believing it and trusting in what he’s saying.”

Running back Kennedy Brooks returns after sitting out a year due to COVID-19 concerns. Brooks ran for 2,067 yards and 18 touchdowns his first two seasons.

Eric Gray has transferred in from Tennessee and has cemented his spot as one of the team’s top two running backs. Last season, he rushed for 772 yards and caught 30 passes for 254 yards. He’s the Big 12’s preseason Newcomer of the Year.

Thomas was a second-team All-Big 12 selection last season after leading the Sooners with 8.5 sacks and 13 tackles for loss. Winfrey, projected by some to be a first-round draft pick, had six tackles for loss and three pass breakups last season.

“He’s probably, within the locker room, one of the more beloved members on the team,” Riley said. “He’s so for everybody in that room. The guys see that.”

Oklahoma kicker Gabe Brkic is a preseason All-Big 12 selection. He was perfect on field goals and extra points as a freshman two years ago. Last season, he had eight multi-field goal games and made four field goals from at least 50 yards. He has made all 102 of his extra point attempts in his career.

Oklahoma’s key non-conference game is the home matchup with Nebraska on Sept. 18. The Sooners play No. 21 Texas in Dallas on Oct. 9, host No. 7 Iowa State on Nov. 20 and visit Oklahoma State on Nov. 27. The opener is on the road Sept. 4 against Tulane.