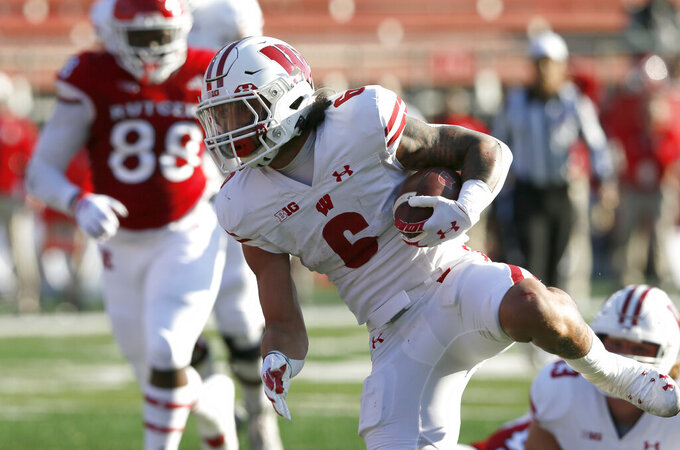 Wisconsin running back Chez Mellusi (6) rushes for a touchdown against Rutgers during the first half of an NCAA college football game, Saturday, Nov. 6, 2021, in Piscataway, N.J. (AP Photo/Noah K. Murray)

MADISON, Wis. (AP) — Wisconsin running back Chez Mellusi will miss the rest of the season with an injured left knee, leaving the 20th-ranked Badgers without their leading rusher.

Mellusi, a Clemson transfer, suffered the injury in the third quarter of Wisconsin’s 52-3 victory at Rutgers on Saturday. Coach Paul Chryst said Thursday that Mellusi won’t play again this season and likely wouldn’t be available for spring practice either.

“I thought he gave a ton to this team certainly in production but a lot of other areas,” Chryst said “I’m sad about that. He’s competitive and he’ll come back.”

Chryst said it’s too early for him to speculate on exactly when Mellusi might return to action but added that “I think it’s certainly going to be one of those where it won’t be spring ball.”

Mellusi had rushed for 815 yards this season to rank fifth in the Big Ten. He had 173 carries to rank second in the Big Ten and 13th among all Football Bowl Subdivision players.

During Wisconsin’s five-game winning streak, Mellusi had formed a dynamic running-back tandem with freshman Braelon Allen, who has rushed for over 100 yards in each of the Badgers’ last five games.

Wisconsin’s ground attack remains in capable hands with Allen leading the way, but someone will have to step up to fill complementary roles in the backfield. Wisconsin’s depth at running back had taken plenty of hits already this season before Mellusi’s injury.

Mellusi’s injury could result in more carries for Julius Davis, who got his first seven carries of the season against Rutgers and rushed for 32 yards. Brady Schipper has 19 carries for 83 yards this season. Jackson Acker had his first three career rushing attempts at Rutgers and ran for 24 yards and a touchdown.