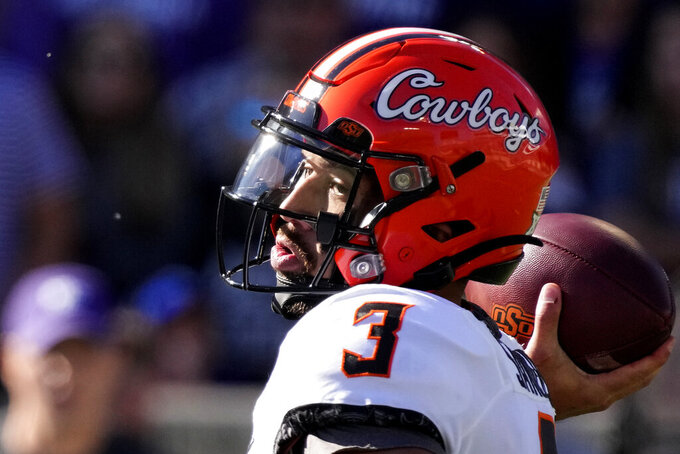 MANHATTAN, Kan. (AP) — After the final seconds ticked away on No. 22 Kansas State's comprehensive 48-0 win over ninth-ranked Oklahoma State on Saturday, thousands of purple-clad fans didn't storm the field so much as they wandered onto it in celebration.

Which was altogether fitting, considering the way the Wildcats methodically trounced the Cowboys.

Backup quarterback Will Howard threw for 296 yards and four touchdowns, Deuce Vaughn ran for 158 yards and another score, and a late interception by the Wildcats sealed Oklahoma State's first shutout loss since 2009 while allowing Kansas State to remain a game behind TCU in the race for berths in the Big 12 championship game.

“This is as good a win as I've ever been a part of,” Kansas State coach Chris Klieman said. “Offense fed off defense. Defense fed off the offense. We need to play complementary football and we were really good in all three phases.”

Kansas State scored TDs on its first two possessions, had 495 yards of total offense and held Oklahoma State, which had been the nation’s No. 3 scoring offense at 44.7 points per game, to just 217 yards — less than half its season average.

“We’re confident," Howard said. "We feel good right now. And we just played a really good game against a really good team and beat them 48-0. And the nice thing is, we haven’t played our best game, and that's still in front of us.”

Spencer Sanders was just 13 of 26 for 147 yards with an interception for Oklahoma State (6-2, 3-2) before landing hard on his shoulder midway through the fourth quarter. The star quarterback did not return to the game.

The Cowboys’ most lopsided loss in nearly 18 seasons under coach Mike Gundy was also their first shutout loss to anyone since Nov. 28, 2009, when they fell 27-0 to Oklahoma in the Bedlam game.

“We got our butt kicked,” Gundy said. “I'm not taking anything away from Kansas State. They're a good team and they played really well. I don't know if they could have played a better game than they did today.”

The Wildcats have had some strangely easy wins over Oklahoma State. The last time a Gundy team was held to 12 points or fewer was in a 31-12 loss in Manhattan in 2018, and the last time the Cowboys trailed any game by at least 38 points was during a 48-14 loss to the Wildcats in 2014.

The biggest question surrounding Kansas State was the health of its own quarterback, Adrian Martinez, who played just four snaps in last week's loss to TCU because of a knee injury. And while he warmed up with the starters Saturday, it was the veteran backup Howard who headed out to the field on the opening possession of the game.

Howard proceeded to torture the banged-up Cowboys defense for the next 30 minutes.

He capped the opening drive by hitting Warner on fourth-and-10 for a 38-yard TD reception. Then, after Vaughn ripped off a 62-yard touchdown run, Howard threw a 31-yard third-down scoring strike to Phillip Brooks to make it 21-0.

“Adrian didn't feel like he was 100 percent confident in what he was going to be able to do,” Klieman said, “and I appreciate that because he's a team player. We knew we would be good either way.”

Howard's fourth TD throw — also to Warner and also on third down — was a short screen that turned into a 41-yard strike. And the final touchdown of the half, after Oklahoma State stuffed Kansas State twice at the goal line, went to Vaughn with just 11 seconds left and made it 35-0 at halftime.

Meanwhile, the prolific Cowboys offense couldn't answer any of the scores.

Their opening drive ended with a fourth-down incompletion. The next ended in a punt, and the next when Oklahoma State wide receiver Brennan Presley fumbled the ball away on the first play. The Cowboys punted twice more in the half around an interception, when Sanders overthrew everyone but the Kansas State defense.

The only question in the second half was whether the Wildcats would keep the Cowboys off the scoreboard.

“It takes all of us," Warner said, “to have an outcome like that today.”

Oklahoma State had won eight of its past 10 against ranked opponents, and the losses were by five last year to Baylor and three in double-overtime to TCU this season. But the Cowboys never put up a fight against Kansas State, even though the winner would have the inside track on a possible rematch with the Horned Frogs in the Big 12 title game.

Kansas State celebrated its first home game in 28 days by ending a three-game skid against the Cowboys in confidence-building fashion. It dominated on both sides of the ball, and on special teams, nearly got a punt return touchdown.

Oklahoma State heads down Interstate 70 to face Kansas next Saturday.