No. 24 Arizona State hoping to avoid letdown after big win 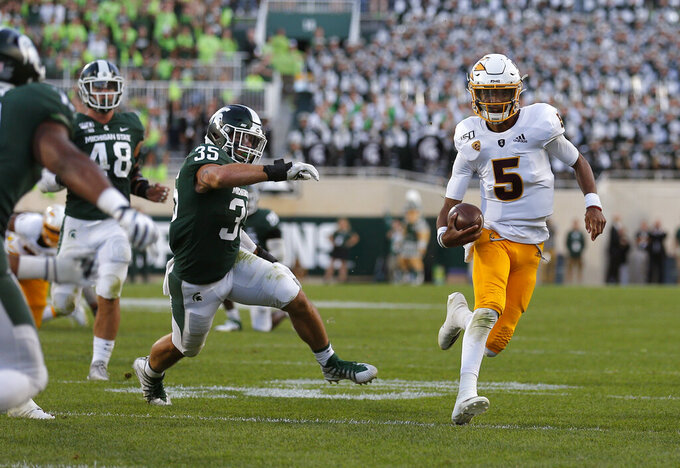 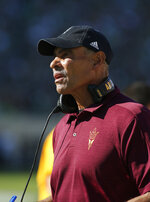 The Sun Devils opened this season by beating two teams they were supposed to beat.

What they did over the weekend may have pushed them into the next echelon.

Poised down the stretch and solid defensively all afternoon, Arizona State picked up the marquee win of the Edwards era by knocking off then-No. 18 Michigan State on the road.

How did the 24th-ranked Sun Devils do it? By taking cues from their even-keel coach.

"I get it all the time: 'Coach, you just kind of always stay like this (drawing a flat line),'" Edwards said Monday. "I say yeah, I have to because I have to make decisions. I don't get caught up in all that other stuff. We want them to be emotional, but I don't want people emotional. I want people passionate because when you get emotional, you make errors. You just do."

The win in East Lansing puts the Sun Devils (3-0) in a familiar position.

A year ago, Arizona State beat UTSA in its opening game and drew national attention by knocking off Michigan State in Tempe.

The Sun Devils followed that up with a disappointing loss to San Diego State, another to Washington the following week on the way to a 7-6 season.

Arizona State opened this season with wins over Kent State and Sacramento State then had another national attention-grabbing win by beating Michigan State 10-7 on Saturday.

The goal now is to avoid the repeat letdown, starting with Saturday's Pac-12 opener against Colorado at home.

"Last year we were in a similar spot. We had some success and then we got our nose punched in, so we'll find out," Edwards said. "All the warning signs are there and I'm going to talk about it all week, then we're going to go in the ball yard and find out."

So far, Arizona State has shown signs it can handle the attention.

Despite starting a freshman at quarterback and at two offensive line spots, the Sun Devils have yet to wilt under pressure.

The opening two wins against smaller-conference schools were not perfect, but had the expected outcomes.

Against Michigan State, defense kept the Sun Devils in the game and Jayden Daniels, the freshman quarterback, made the plays when his team needed it most.

Arizona State's offense labored all afternoon, but Daniels orchestrated a scoring drive with his arms and legs. Playing with the poise of a much older player, he picked the Spartans apart passing and twice had big gains to keep the drive alive, including a scramble for a first down on fourth-and-13. Eno Benjamin scored the go-ahead touchdown on a 1-yard run and Arizona State avoided overtime when Michigan State's Matt Coghlin missed a 42-yard field goal on a re-kick — he made the first one — after the Spartans were penalized for having 12 men on the field.

"There was not a doubt in his mind for him that they were going to be able to move the ball," Edwards said of Daniels. "That's how he felt, but that's who the kid is."

The Sun Devils haven't been winning pretty, but it's been out of necessity. With young players in key spots, the offense is still trying to find solid footing.

Arizona State's defense has given them the chance, holding the first three opponents to a combined 21 points, giving the Sun Devils a shot at winning every game even when the offense has been uneven.

The next chance comes Saturday. The Sun Devils don't want to muck it up.